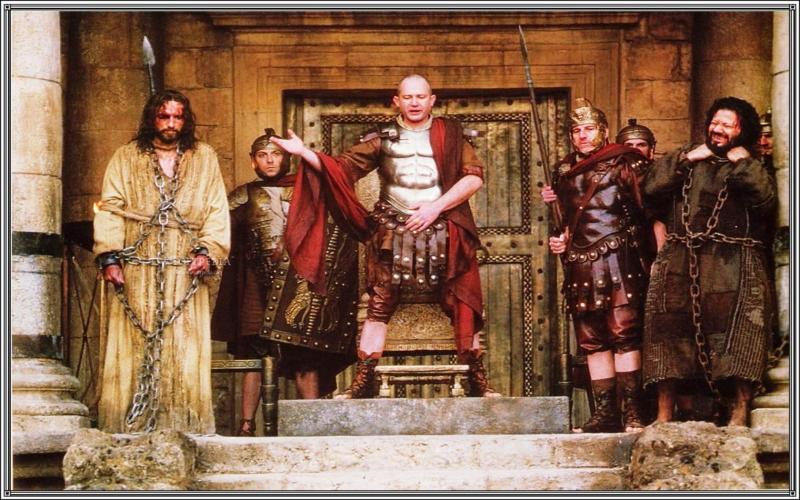 Mark 15:6-15
6 Now at the feast he used to release for them any one prisoner whom they requested. 7 The man named Barabbas had been imprisoned with the insurrectionists who had committed murder in the insurrection. 8 The crowd went up and began asking him to do as he had been accustomed to do for them. 9 Pilate answered them, saying, “Do you want me to release for you the King of the Jews?” 10 For he was aware that the chief priests had handed Him over because of envy. 11 But the chief priests stirred up the crowd to ask him to release Barabbas for them instead. 12 Answering again, Pilate said to them, “Then what shall I do with Him whom you call the King of the Jews?” 13 They shouted back, “Crucify Him!” 14 But Pilate said to them, “Why, what evil has He done?” But they shouted all the more, “Crucify Him!” 15 Wishing to satisfy the crowd, Pilate released Barabbas for them, and after having Jesus scourged, he handed Him over to be crucified.

Pilate was trying to let Jesus go so that no guilt would befall him. We see however that the public controlled his decisions and despite feeling as though Jesus had done nothing wrong, he followed the crowd instead of his heart. How often do we do this? How often do we trade temporary social gratification instead of eternal righteousness? Pilate no doubt was troubled as this day unfolded and he learned of what happened to Jesus. Even more so, maybe he became glad when he learned of Jesus’ resurrection.

We read here through the investigation of Mark into this situation that the religious leaders were envious of Jesus. Why do you think that is? Was it because of Jesus’ righteousness? Was it His display of heavenly power? Was it His ease of commanding authority from others? Was it His teaching of true righteousness over religion? We can see from Jesus’ example that we don’t need a position of authority to be a leader. He was never commissioned as a religious authority by man’s standards. He simply spoke the truth and people followed. Jesus was a natural leader and proved to the people that leadership isn’t about how good you look, how well you follow the rules, or even the position of authority you are given. Leadership is about how well you love and serve others, something the priests, scribes, and Pharisees clearly didn’t understand. The people called Jesus rabbi, a title usually given to someone who has been taught, tested, and approved as a teacher of the Scriptures, simply by demonstrating and exemplifying God’s love. This revealed the Light of God and exposed the darkness of the religious leaders’ hearts.

So Jesus, then, was condemned in place of a convicted murderer. Some pastors teach about Jesus taking our place in this scene. We are condemned and convicted by our selfish and sinful desires but He took our place so that we may go free. This is the grace of God. Maybe it doesn’t appear to be grace on the surface. In human terms, we just see a man being wrongly convicted and getting the short end of the stick, so-to-speak, while a murder goes free. To us this isn’t justice; this is injustice! Imagine if our court systems went this way. Imagine if innocent people could volunteer to suffer the consequences of someone else’s actions. How many people would step up to do it? How many people would be forever changed if a stranger bore their punishment for them? Man’s injustice is God’s justice; for His ways are not our ways. It doesn’t make sense to us, but this is how He operates. It doesn’t seem fair to us, but this is how He redeems us.

How would you feel in Barabbas’ place? At first, Barabbas probably was confused and shocked that he was released. He probably felt quite lucky that at the last minute, this Jesus guy showed up that everyone hated and it resulted in his freedom. How grateful are you that Jesus took your place? How will you respond in your life as a result of being set free even though you didn’t deserve it? How can we repay Jesus for taking our place?