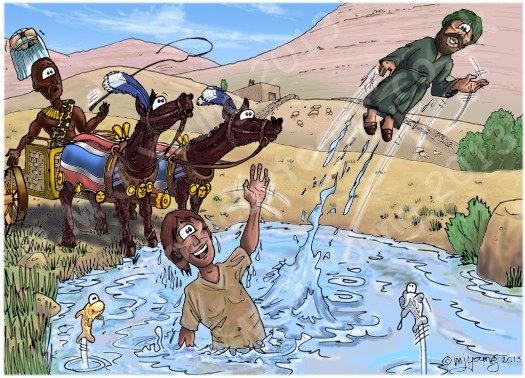 Acts 8:39-40
39 When they came up out of the water, the Spirit of the Lord snatched Philip away; and the eunuch no longer saw him, but went on his way rejoicing. 40 But Philip found himself at Azotus, and as he passed through he kept preaching the gospel to all the cities until he came to Caesarea.

This part of the story is worth stopping and looking at.  It’s amazing to see how many times throughout the bible the Holy Spirit physically has picked up and moved someone.  We can read about it in both books of Kings, Ezekiel, and even the Apostle Paul mentions knowing someone it had happened to in 2 Corinthians.  The word “snatched” is the same Greek word used to explain rapture.  He was suddenly taken away and appeared elsewhere.  Now, I’m sure we might be missing a few tiny details such as how Philip felt about the experience, if he told anyone about it, and what exactly happened when he reappeared in Azotus, but we at least see that it was the start of his public ministry.

The eunuch also was compelled to begin ministering and rejoicing.  It has been said that one of the 7 churches we read about in the beginning of Revelation existed because of the evangelism of this eunuch.  Even more important than the physical snatching of Philip is the spiritual snatching of both of these men.  What happens when God gets ahold of our hearts?  What happens when we respond to His calling?  Our lives are drastically changed.  In my own life I know that some things changed right away while others took some time for me to let go of and the change was gradual.

Like any new relationship, there are two speeds of change.  Immediate change is that you suddenly start spending more time with that person and integrating them into your schedule.  There are certain things you try to learn about them to grow closer and know them better.  But then there are those things that take time like trust.  You might be eager to learn about the other person but you may be hesitant to tell them all your deepest secrets.  You might meet them for coffee somewhere but are resistant to invite them to your house.  You will gladly have dinner with their parents but might be hesitant to introduce them to yours.  Isn’t this how we respond to God?

We read stories like this one today and dismiss it as a fairy tale or something that can’t happen anymore.  We look at today’s condition of relationships and think, “divorce is at an all time high, chivalry is dead, and nobody can be trusted.”  Yet these are all excuses not to commit to a relationship fully: romantic or otherwise.  Even worse, we avoid our relationship with God because we compare Him to untrustworthy and unfaithful humans.  Why don’t we allow ourselves to be whisked away by God?  Why don’t we give Him the opportunity to prove Himself in our lives?  What is there to lose?  We fantasize about the perfect person to marry or the perfect best friend yet we ignore the opportunity to have a relationship with an actual perfect being.