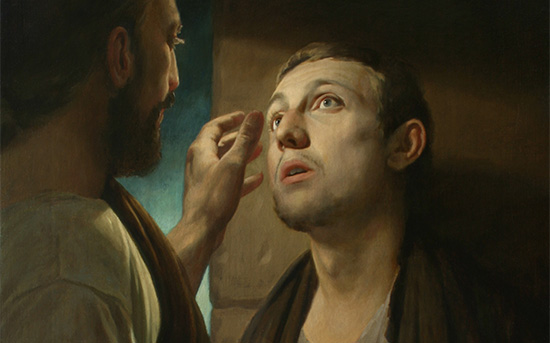 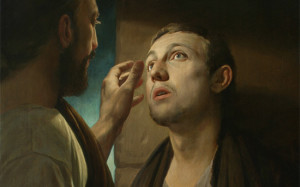 Mark 8:22-26
22 And they came to Bethsaida. And they brought a blind man to Jesus and implored Him to touch him. 23 Taking the blind man by the hand, He brought him out of the village; and after spitting on his eyes and laying His hands on him, He asked him, “Do you see anything?” 24 And he looked up and said, “I see men, for I see them like trees, walking around.” 25 Then again He laid His hands on his eyes; and he looked intently and was restored, and began to see everything clearly. 26 And He sent him to his home, saying, “Do not even enter the village.”

Put yourself in the blind man’s shoes.  Maybe you’ve heard of this Jesus fellow.  Word has it that He is in town and some of your friends are saying, “Come on, let’s see if He will heal your blindness!”  I don’t know what it is like to be blind, but I’m sure this man felt as though he had nothing to lose.  So they bring you to this Jesus fellow and explain that you are blind and want to be healed.  What happens when Jesus hocks a loogie into your face?  Ok, maybe that seems a bit drastic, but can you imagine yourself standing there in the darkness waiting for this man to heal your blindness and He spits in your eyes?  There is a similar story we can read in John 9 where Jesus heals a blind man by spitting in the dirt and covering the man’s eyes with the mud and telling him to go wash it off.  In Mark’s account, however, it seems we have a different story of Jesus spitting the blindness out of someone.

Did you notice that this miracle didn’t just instantly happen?  The miracle unfolded in parts.  The man saw a little bit at first and then again clearly.  Maybe the foggy vision was a result of the spit in his eyes, but let us ponder that sometimes miracles take time to fully develop.  We have created a mindset of instant gratification mixed with an expectation of everything to go the way we want it to go.  This spoils the wonder of the miracle that He does for us physically as well as spiritually.  The only expectation we should have from God is the healing.  It might take some time, but if we continue to rely on Him for what He promises us (complete restoration), it will come to pass.

In movies and TV shows we see people who don’t stay in the hospital as long as they should because they grow impatient or have to jump to action before they are completely recovered from their injuries.  What would have happened if this man did the same thing?  What if when Jesus asked if he could see the man replied, “Yeah, it’s blurry.  Now instead of having no vision, I have messed up vision.  Thanks a lot for the help!” and stormed away?  How many of you reading this can admit that this might have been your reaction?  Maybe it still is your attitude about what God is trying to do inside you right now, but you have grown impatient because He isn’t doing it the way you think He should.

Our study through the book of Mark has shown us some extreme cases and tests of faith by those who say they want healing from Jesus.  Some historical accounts reveal that in Roman times, they believed that saliva held some healing properties.  To us, spitting on or towards someone has actually become a sign of disrespect, which is why these stories of Jesus’ spitting to heal others strikes us as odd and possibly obscene.  But this action might have been expected by these men who were trying to be healed.  Some nonbelievers might explain this story as Jesus using a common cure for an ailment and getting spiritual recognition for it because we want to see Jesus as Holy and Mighty.  The interesting thing is, if those who were sick thought it would have worked before, why didn’t they spit in their own eyes, have their friends do it, or even see a doctor about it?  What does this reveal to us?

One speculation floating around on the Internet is that Jesus used common medical methods to increase the faith of those He was healing so that the healing worked.  Some people simply believe He could and would heal them, so the healing was “easy,” whereas others may have needed a little primer to get them in the mindset of believing they would be healed.  This seems to make a bit of sense given that the healing of others requires the faith of those being healed and those around them.  This is why Jesus couldn’t perform many miracles in His hometown, because of the peoples’ lack of faith.

The purpose for this story in the bible is to incite us to belief that Jesus can heal even the blind.  If we believe this is possible, then we too can receive this type of healing.  Let us not lose sight, however, of the spiritual parallel to this story.  God can and will, if we trust Him to, heal us of our spiritual blindness.  He can and will heal us of our blindness whether we were born with it (like the man in John 9) or if we weren’t born with it but developed it over time.  When God confronts us in our lives and reveals to us our sickness and how He can heal it, how do we respond?  Do we prefer He does it another way?  Do we walk away halfway through the process because it isn’t what we expected He would do?  Do we get frustrated because we wanted a different result?  Or do we stay and trust Him fully?