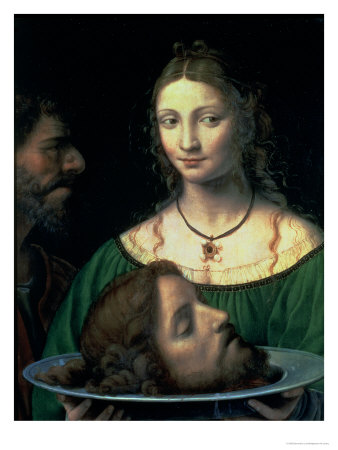 Matthew 14:1-13
1 At that time Herod the tetrarch heard the news about Jesus, 2 and said to his servants, “This is John the Baptist; he has risen from the dead, and that is why miraculous powers are at work in him.” 3 For when Herod had John arrested, he bound him and put him in prison because of Herodias, the wife of his brother Philip. 4 For John had been saying to him, “It is not lawful for you to have her.” 5 Although Herod wanted to put him to death, he feared the crowd, because they regarded John as a prophet. 6 But when Herod’s birthday came, the daughter of Herodias danced before them and pleased Herod, 7 so much that he promised with an oath to give her whatever she asked. 8 Having been prompted by her mother, she said, “Give me here on a platter the head of John the Baptist.” 9 Although he was grieved, the king commanded it to be given because of his oaths, and because of his dinner guests. 10 He sent and had John beheaded in the prison. 11 And his head was brought on a platter and given to the girl, and she brought it to her mother. 12 His disciples came and took away the body and buried it; and they went and reported to Jesus. 13 Now when Jesus heard about John, He withdrew from there in a boat to a secluded place by Himself; and when the people heard of this, they followed Him on foot from the cities.

When we read this story, we first probably think, “John the Baptist scared Herod,” but we see that the underlying issue isn’t John, but God. Herod is a perfect example of the most of us: we want to do the right thing but are too concerned about what other people think. He clearly knew the difference between right and wrong, but was too easily enticed into doing what was wrong. While we normally don’t identify with Herod in reading this as a bible story, the truth is that we are all Herod. We are all stuck in the spiritual war of doing what we know is right and doing what we think is best for us. Herod, knowing John was a prophet and a spiritually powerful man (in the long run, we would all think it best not to mess with him), Herod bowed to the public and his sexual desires. Not only was he having an affair with his brother’s wife, her daughter also was able to entice him to put himself in a compromising situation. When we are easily ensnared by the devil’s schemes, we compromise ourselves.

When Jesus was revealed to Herod, we see his fears return. We don’t even see evidence of Jesus confronting Herod the way John did, but we do see that Herod’s sins are once again brought into the light (even if only to Herod himself). Through this, we can see that Herod’s fear, even if he didn’t recognize it, was of God’s truth, not John the Baptist. God’s truth is the similarity between John and Jesus. When we get caught up in compromising situations that cause us to behave sinfully, we don’t like God’s truth shining into it. Yet when this moment arrives, we shouldn’t reject or ignore it. The bible tells us we should embrace it because it will lead us to righteousness. In Proverbs 9 we read:

10 The fear of the LORD is the beginning of wisdom, And the knowledge of the Holy One is understanding.

If we want to be wise in our thoughts and actions, we need to embrace our fear of the Lord. If we want to know God, we must accept our fears as revelations of things we must change in our lives. How do you feel when God’s light shines on your struggle? Do you view it as an opportunity to surrender it to Him or do you hide and bend to the status quo? Do you fear the crowd more than God?