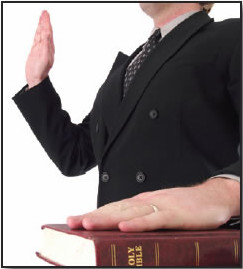 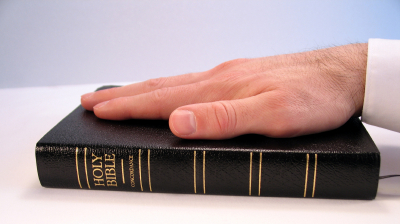 Matthew 5:33-37
33 “Again, you have heard that the ancients were told, ‘YOU SHALL NOT MAKE FALSE VOWS, BUT SHALL FULFILL YOUR VOWS TO THE LORD.’ 34 “But I say to you, make no oath at all, either by heaven, for it is the throne of God, 35 or by the earth, for it is the footstool of His feet, or by Jerusalem, for it is THE CITY OF THE GREAT KING. 36 “Nor shall you make an oath by your head, for you cannot make one hair white or black. 37 “But let your statement be, ‘Yes, yes ‘ or ‘No, no ‘; anything beyond these is of evil.

Have you ever told someone something and they didn’t believe it? Did you follow up their unbelieving response with, “I swear to you…” or “I promise this is the truth,” or even “I swear to God”? Jesus says this is evil. Jesus tells us these colloquialisms that have continued to survive since first century Judaism are sinful expressions, but why? It doesn’t hurt anybody, does it? How does it come between God and us? What does it matter if we “swear on our mother’s grave” to express the truth in something we say? The matter is why we say it and why we have to say it.

What Jesus is trying to explain here is that we shouldn’t need to add anything to our words because if we speak and live in the truth, it will justify itself. He starts with the commandment about lying, repeating a commandment that was well-known but not many really followed. If they did, then they wouldn’t have had to speak with extra securities guaranteeing their words were true. Jesus is revealing a societal downfall that had slowly crept its way into the heart of God’s people and they didn’t even realize it. When was the last time you had to “swear” something you said was true in order to convince the hearer. Were they truly convinced or did you just encourage them to believe you a little more than they originally did? Did they still doubt your words? Jesus’ point is this: we should be living lives that prove the truth of our words.

Jesus gives us the leeway of repeating ourselves once in order to solidify the truth in our words, but anything beyond that shouldn’t be necessary. If it is, we find ourselves in a situation where one of the two following statements is true: 1) we are talking with a fool, which no amount of encouragement and urging will satisfy or 2) we behave in a way with others that our words are not credible and thus should not be talking at all. I know that may seem harsh and cuts through any gray areas on this subject, but this was Jesus’ intent. Does our walk match our talk? Can people believe what we say based on how we live? Are we walking in the truth or do we cast doubt about our lives because we are walking contradictions? James, Jesus’ brother, re-emphasizes this point in chapter 5 of his letter to the church scattered abroad in regards to how they represent God’s Kingdom:

12 But above all, my brethren, do not swear, either by heaven or by earth or with any other oath; but your yes is to be yes, and your no, no, so that you may not fall under judgment.

The Jews used to swear to God, swear by this earth, swear by heaven, and swear on Jerusalem. Apparently, this tradition carried over as the Jews became Christians in the first century and it became a stumbling block not just for those who said it, but those who listened. If we live righteously and in the truth, then why must we qualify our statements with anything so they are believable? As John Gill expounds upon this principle in his commentary on the subject, he explains:

Whenever there is an occasion for affirming, or denying anything, let it be done nakedly, simply, and absolutely, without any form of oath annexed to it; for whatever addition of that kind is made comes from evil, and tends to it, and is evil: lest ye fall into condemnation; by the Lord; for either false, or rash, or profane swearing; for he will not suffer it to go unpunished. Some copies read, “lest ye fall into hypocrisy”; or dissimulation, and get into a habit and custom of lying and deceiving, as common swearers do.

Do you fall into this category? Have you noticed that the things you say are unbelievable and therefore you must qualify your statements before others will accept your words as truth? Do you walk in God’s absolute truth and therefore recognize you do not have to convince others of its truth? When we are living God’s will and walking in His truth, we do not have to convince others of it, they will see it. When we are living in God’s purpose for our lives, our actions will be a testament of our speech. When we swear to God, it should be by how we live our lives, not the words we speak.