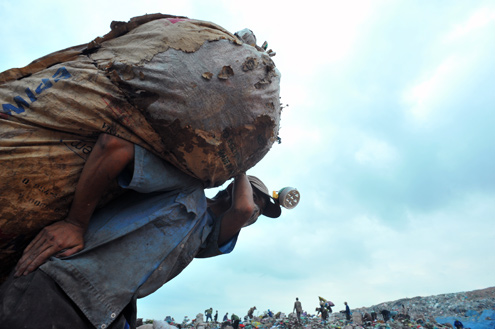 17 They took Jesus, therefore, and He went out, bearing His own cross, to the place called the Place of a Skull, which is called in Hebrew, Golgotha. 18 There they crucified Him, and with Him two other men, one on either side, and Jesus in between. 19 Pilate also wrote an inscription and put it on the cross. It was written, “JESUS THE NAZARENE, THE KING OF THE JEWS.” 20 Therefore many of the Jews read this inscription, for the place where Jesus was crucified was near the city; and it was written in Hebrew, Latin and in Greek. 21 So the chief priests of the Jews were saying to Pilate, “Do not write, ‘The King of the Jews’; but that He said, ‘I am King of the Jews.’” 22 Pilate answered, “What I have written I have written.”

I don’t think it was coincidence that after what I had written yesterday, we learned in class about Pax Romana, which was the term used in these days to explain the importance of keeping the peace in Rome.  This was the weight of Pilate’s predicament in yesterday’s post.  It wasn’t necessarily an order of peace, but rather a principle of doing specific things in order to keep Rome unified.  I found a decent article on it here: Pax Romana.

There are a few instances in the passion story that hold a unique significance which otherwise wouldn’t have been noted.  I think we often look at this little part of scripture as irony.  We tend to see it as Pilate making a mistake and the Jews getting upset about it.  But is that what really happened?  We saw the conflict in Pilate regarding his own stance in the matter and his duty as a Roman official.  Did Pilate eventually believe in Jesus as the Son of God?  He was certainly unnerved in the judgment seat in the court.  Is it possible that Pilate actually believed in Jesus as the King of the Jews?

In verse 17 we see the picture of Jesus carrying the cross to Golgotha, where He would be hung upon it.  I think we tend to warp this scene when we match it up with His other teachings.  In Matthew 6, Jesus explains to the disciples, “24 Then Jesus said to His disciples, “If anyone wishes to come after Me, he must deny himself, and take up his cross and follow Me.” We have allowed our own concepts through religion to make this a burden.  We think about the weight of a big wooden cross, we might even picture the scene in The Passion of the Christ and we look at this as a burden.  Even nonbelievers see this as a burdensome event.  There is even a time when the Romans order a passerby to help Him carry it because His body had become so weak.  Folks, I believe we have this whole picture twisted worse than the very crown of thorns Jesus was wearing!

I’d like to quote Bonhoeffer in his book The Cost of Discipleship.  He explains what Jesus really means about becoming one of His disciples, “When Jesus says, ‘Come, follow me,’ He bids the hearer, ‘Come and die.’”  Because we see the carrying of a cross a burdensome event, we tend to see “following Christ” as a burdensome lifestyle.  That could not be farther from the truth!  It is an act of freedom.  It is a time of joy and peace.  It is like taking out the trash.  Certainly, there is a weight associated with taking out the trash, however it is always a happy time. Even if we have attachment to what we are throwing away, in the end we are set free from it.

The trash itself has become a burden.  Maybe it stinks, maybe it crowds your life, maybe someone else told you how much it is affecting them.  Whatever the case, there is a certain motivation to take out the trash.  We might be hesitant because maybe you’re like me; sometimes I throw things away wondering if I will need it in the future.  I have never felt more free than when I have thrown something away I thought I might need.  This is what Jesus is calling us to in following Him.  Sometimes it might seem like a sacrifice.  Other times you can’t get to the dumpster fast enough.  Whatever the case may be, the fact remains that there is an excitement and anticipation on the way and a blanketing freedom once the deed is done.

Are you ready to take out the trash?  Are you willing to take up your cross and happily follow Him?  Maybe you haven’t even recognized you have trash.  It’s possible you have grown so accustomed to it that you can’t even admit you have trash.  Someone very well could have convinced you that you are supposed to wander in the desert for 40 years carrying your trash to earn your freedom from it.  Maybe you already dumped your trash but you returned and picked it back up!

You no longer have to live a life full of and burdened by your garbage!  Why should you keep it any longer?

3 thoughts on “Take Up Your Trash and Follow Me”