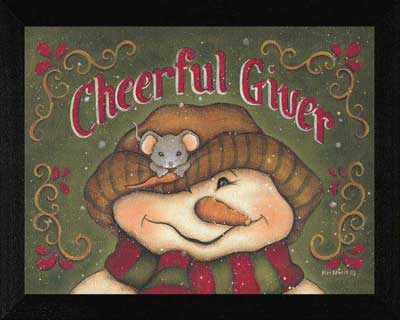 Malachi 3:8-12
8 “Will a man rob God? Yet you are robbing Me! But you say, ‘How have we robbed You?’ In tithes and offerings. 9 “You are cursed with a curse, for you are robbing Me, the whole nation of you! 10 “Bring the whole tithe into the storehouse, so that there may be food in My house, and test Me now in this,” says the LORD of hosts, “if I will not open for you the windows of heaven and pour out for you a blessing until it overflows. 11 “Then I will rebuke the devourer for you, so that it will not destroy the fruits of the ground; nor will your vine in the field cast its grapes,” says the LORD of hosts. 12 “All the nations will call you blessed, for you shall be a delightful land,” says the LORD of hosts.

This is a touchy subject for most of us. In our sinful nature, we don’t like giving away money unless it benefits us (tax write offs). However, God asks us to honor Him with 10% from our regular earnings and the offerings we want to give to honor Him. In the church at Corinth, there was an issue about this so the Apostle Paul wrote to them to clear things up. In 2 Corinthians 9 we read about the “cheerful giver” but let’s see it in context and how well it relates to what we are reading in Malachi:

6 Now this I say, he who sows sparingly will also reap sparingly, and he who sows bountifully will also reap bountifully. 7 Each one must do just as he has purposed in his heart, not grudgingly or under compulsion, for God loves a cheerful giver. 8 And God is able to make all grace abound to you, so that always having all sufficiency in everything, you may have an abundance for every good deed; 9 as it is written, “HE SCATTERED ABROAD, HE GAVE TO THE POOR, HIS RIGHTEOUSNESS ENDURES FOREVER.” 10 Now He who supplies seed to the sower and bread for food will supply and multiply your seed for sowing and increase the harvest of your righteousness; 11 you will be enriched in everything for all liberality, which through us is producing thanksgiving to God.

We always talk about being a cheerful giver and not giving because we feel we have to, but that we get to. However here we also see that the cheerful giver receives bountifully from God for his desire to give in honor of God. If we honor God, He honors us. It is simple. So why then is God saying that people are robbing from Him if they are not giving out of a cheerful heart? Notice in verse 10 where He says to bring the “whole” tithe into the storehouse? People were religiously giving (out of compulsion) and weren’t being honest about it. In other words, everyone at church on Sunday saw everyone else putting something into the basket and pretending like they were tithing, but God knew they were only dropping in a few dollars just to keep up appearances! He would rather we give nothing at all and be honest about it than just fake it to look good. In the Sermon on the Mount, Jesus mentions 2 things about our giving: when we give to the poor do it not to be noticed by men but in secret and do not store up for ourselves treasures in this world because it will fade away. When we rob God of our hearts, we worship the money we are “saving” instead of worshipping Him.

God doesn’t need our money. It isn’t about the money, it is about our hearts and if we are being honest with Him and ourselves. In Acts 5, we encounter an interesting story about a couple who tried to deceive men and God and wound up dropping dead in the midst of their lies:

1 But a man named Ananias, with his wife Sapphira, sold a piece of property, 2 and kept back some of the price for himself, with his wife’s full knowledge, and bringing a portion of it, he laid it at the apostles’ feet. 3 But Peter said, “Ananias, why has Satan filled your heart to lie to the Holy Spirit and to keep back some of the price of the land? 4 “While it remained unsold, did it not remain your own? And after it was sold, was it not under your control? Why is it that you have conceived this deed in your heart? You have not lied to men but to God.” 5 And as he heard these words, Ananias fell down and breathed his last; and great fear came over all who heard of it. 6 The young men got up and covered him up, and after carrying him out, they buried him. 7 Now there elapsed an interval of about three hours, and his wife came in, not knowing what had happened. 8 And Peter responded to her, “Tell me whether you sold the land for such and such a price?” And she said, “Yes, that was the price.” 9 Then Peter said to her, “Why is it that you have agreed together to put the Spirit of the Lord to the test? Behold, the feet of those who have buried your husband are at the door, and they will carry you out as well.” 10 And immediately she fell at his feet and breathed her last, and the young men came in and found her dead, and they carried her out and buried her beside her husband.

Question: is this not what we teach our kids when all they know about tithes and offerings is the dollar you give them every week do drop in the basket? I grew up doing the same thing, but I always noticed the envelope my dad had ready to put in as well. When I was old enough, I asked him what it was and that is when he explained to me tithing, that God asks us in honor of and love for Him, 10% of our wages. I’ll repeat what I said earlier: God doesn’t need our money, He wants our hearts! For honoring Him, He promises the floodgates of heaven to open up and pour out blessings upon us as well as protecting us from our enemy who seeks to destroy us and wear us out. To me, it sounds like 10% is a good investment, don’t you?

If God invested 100% in us, why then can we not honestly honor that in return with 10%? Our tithes and offerings not only say to God we will be obedient to what He asks, but also that He is worth it. We are trusting God with that 10% that we could have used elsewhere. Maybe we are saying, “well, I can’t even afford my rent, how am I going to give 10% to the church?” It’s not about the money; it’s about our heart. Now, this isn’t to say that we should use the excuse, “well, God knows my heart. I want to give, but I can’t.” You’re right, He knows your heart is more worried about paying others before Him! What I am getting at is that yes, at the moment we recognize the importance of honoring God with our money, we might not have but a few pennies to give…but if you truly want to give, then give Him those two pennies! You would be amazed how your life will be revolutionized by simply giving to God. Next you know, those 2 pennies you had will turn into 10% you can give, and then even more so you can give offerings as well. Don’t underestimate the promises of God. He always comes through as long as we are obedient.