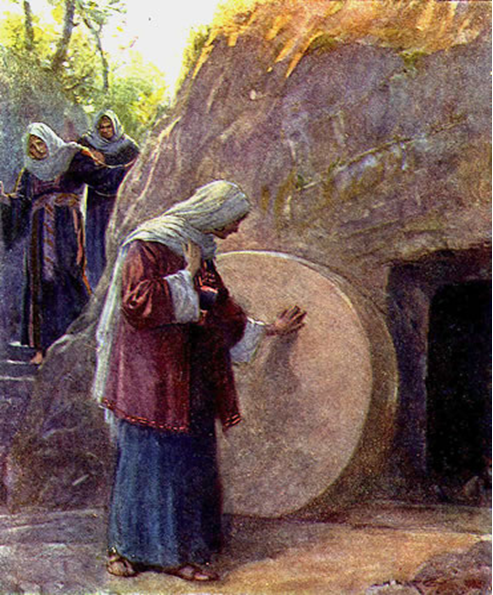 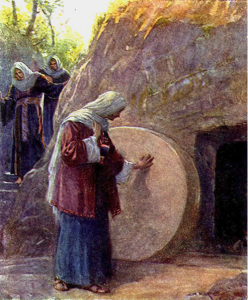 Mark 16:1-8
1 When the Sabbath was over, Mary Magdalene, and Mary the mother of James, and Salome, bought spices, so that they might come and anoint Him. 2 Very early on the first day of the week, they came to the tomb when the sun had risen. 3 They were saying to one another, “Who will roll away the stone for us from the entrance of the tomb?” 4 Looking up, they saw that the stone had been rolled away, although it was extremely large. 5 Entering the tomb, they saw a young man sitting at the right, wearing a white robe; and they were amazed. 6 And he said to them, “Do not be amazed; you are looking for Jesus the Nazarene, who has been crucified. He has risen; He is not here; behold, here is the place where they laid Him. 7 “But go, tell His disciples and Peter, ‘He is going ahead of you to Galilee; there you will see Him, just as He told you.’ ” 8 They went out and fled from the tomb, for trembling and astonishment had gripped them; and they said nothing to anyone, for they were afraid.

The three women who had watched Jesus die and then be buried from a distance were returning to embalm His body. It is a bit interesting that it wasn’t until they were almost to the tomb that they realized a group of guys would have to roll away the large stone so they could enter and anoint the body. We would think they would have planned ahead about this, since they saw how difficult it was and how many men it took to roll the stone into place two days before. We know from other accounts that in addition to the stone entrance, there were guards placed to watch the tomb so that nobody could steal the body. Would they have allowed the women to enter and anoint Jesus’ body? These little details are quickly forgotten when they arrived at the tomb to find the stone rolled away and the body missing. We might think that the lack of preplanning is silly in regards to the women, who obviously couldn’t roll the stone away themselves, but let’s try to understand why they didn’t think ahead of that detail. They were focused on Jesus, not the obstacles that lay ahead.

Too often, we rely more on our humanness than God’s superiority. Guilty of this myself, I try to plan as much as possible so that things go “smoothly,” instead of relying on God and keeping my vision focused on Christ. If we are doing what God wants us to do, then minute details such as a heavy stone, protection from a fierce army, and the provision of food for the multitudes won’t be much of a concern for us. It is logical, in a human sense, to be concerned about how they would have entered the tomb. In a spiritual sense, however, it should have been the least of their worries…and it was. These women were walking into a spiritual awakening that they could never have imagined.

27 And Jesus said to them, “You will all fall away, because it is written, ‘I WILL STRIKE DOWN THE SHEPHERD, AND THE SHEEP SHALL BE SCATTERED.’ 28 “But after I have been raised, I will go ahead of you to Galilee.”

Afterward, Peter insisted upon his allegiance to Christ (which we know he denied three times in the crucifixion process), which is why the angel specified to let Peter know that He was back. The women’s fear was not about Jesus coming back, but about how the world would respond if they know He had returned. They witnessed the anger and cruelty of the Romans and the Jewish zealots towards Jesus, how would they treat these women (who had less of a societal right than the men in this time) if they started announcing that Jesus has risen from the dead? Their astonishment was in Jesus’ resurrection; their fear was in mankind’s evil.