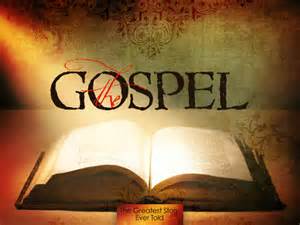 As Paul closes out his letter in the last 2 chapters of 1 Corinthians, he shifts focus a little bit.  It seems he has finished answering the questions and addressing the issues and is now teaching/reinforcing what they already know.

15 Now I make known to you, brethren, the gospel which I preached to you, which also you received, in which also you stand, 2 by which also you are saved, if you hold fast the word which I preached to you, unless you believed in vain. 3 For I delivered to you as of first importance what I also received, that Christ died for our sins according to the Scriptures, 4 and that He was buried, and that He was raised on the third day according to the Scriptures, 5 and that He appeared to Cephas, then to the twelve.  6 After that He appeared to more than five hundred brethren at one time, most of whom remain until now, but some have fallen asleep; 7 then He appeared to James, then to all the apostles; 8 and last of all, as to one untimely born, He appeared to me also.

“The Gospel” is a phrase that gets thrown around a lot in church, isn’t it?  It very well should since it is of first importance, but do we know what it is?  I love it when pastors preach and teach the fundamentals of the Gospel of Christ because the phrase tends to become the object of our worship, praise, and aspiration but we sometimes forget that the phrase itself only describes what Jesus did.  So, what is it exactly?

The original Greek word is euaggelion which is also where we get the word evangelize.  To evangelize is to be what I like to call “a gospelizer,” meaning one who tells others about the gospel.  The origins of the use of this word is from whenever a king would send out an announcement to its kingdom.  An evangelist, then, is one who is sent out by the king to tell others of this news about the Kingdom of God.  As Christians, we are all sent out to evangelize: tell everyone of the good news that we find here in verse 3 and 4.

One thing I find consistent in Paul’s writings is how he continues to preach to believers.  He continues to remind them of things that he has already taught them.  Remember, the letters of Paul that we find in the bible are written to churches he already founded (except Romans which was a church already founded and with which he was building a relationship).  If these folks already believe and “know” this information, why is he telling them again?  It is because we need to remember and be clear on the facts.  Do you remember all the details of things you learned in middle school and haven’t used or studied since?  This is the purpose behind ritual and habit, to develop a system of ways to remember important things and continue, as Paul said, holding fast to what we have been taught.  It is important to preach and teach the gospel to believers and nonbelievers alike because we tend to forget things we don’t use or review often.  This was my meaning earlier about throwing around the phrase “the gospel” and not really knowing what it means.

I see the occasional chatter online about “worshipping the gospel” instead of God.  It seems a little funny to me and to be honest, I’m not quite sure how one does that.  However, I understand the point: don’t confuse what Jesus did for us with Jesus Himself.  Don’t worship the actions of Christ instead of Christ.  While the things He did saved us, we must not forget that He is the one who did it for us.  His substitution for our sins and victory over death so we no longer have to be burdened by the slavery of sin was just an action.  We are to worship the creator, not the creation.  Again, I’m not quite sure how people do this, so if you have any examples, feel free to share!  But let us look at Paul’s first two verses and check our hearts if this is true in our lives.

Have you received the gospel?  Have you heard and understood that Christ died for your sins according to the scriptures?  This subtle phrase indicates what we learn all through the Old Testament: that we are in need of a substitution for the ramifications of our sinfulness.  Spiritual death is the result of our sinfulness and we have no hope of freedom from them except for God Himself to intervene in our lives.  Christ’s burial is the next important factor here.  As I was reading over this passage again I realized that His burial wasn’t just physical, it was also spiritual.  I mentioned not too long ago about the realization I had that Jesus, according to the accounts of His life on earth, had the closest relationship with God the Father in comparison to everyone else recorded in the bible.  Yet, while hanging on the cross and bearing the burden of our sinfulness, He felt abandoned by God.  He felt separated and alone.  So, although we focus on the story of the tomb with the big stone, the Roman guards, the angels, and the empty tomb on Easter Sunday, let us not forget to look past the physical and recognize His spiritual burial too.  The final portion of this good news is His resurrection and appearance to all.  As Daniel Harris discusses in his summer series, this is the part of the story that is unique to others and is important to recognize His victory over death, sin, and that He did it for us.  What would be the point of appearing to others if it wasn’t?

I suppose the biggest question that is asked about the gospel is, “how do we know this is true?”  The battle between faith and science has turned up more and more questions and countless arguments about it.  However, the intriguing part about it is that for those of us who believe, is it possible to unbelieve the work of the gospel?  I have tried.  I can’t deny its truth.  I can pretend but deep down I know that this is true.  I’m quite certain this is exactly how the apostles felt when they were murdered for their belief as well.  This is what Paul is talking about when he says in which also you stand.  The Corinthians hold fast to the message of the gospel, the work of Christ in their lives and their personal relationships with God as a result, because they have seen and experienced it firsthand.  I’m convinced this is what Paul is “calling out” when he says unless you have believed in vain.

Since the age of 10, I always had a notion of the existence of God.  I understood what the gospel meant but merely from a knowledge perspective.  It wasn’t until a few years ago when I started taking the gospel seriously that I started to experience what it meant for me personally.  Until then, I went through the motions…I believed in vain.  With my head knowledge, I could recite bible verses, I could tell you all the Sunday school lessons, and even give you the order of the books of the New Testament from memory.  But I couldn’t tell you how Jesus changed my life, the depth of my relationship with God, or why someone else should take the time to develop a relationship with God.  I had the information but I didn’t do anything with it.  Paul’s explanation of belief in vain is just this: you know the story but you’ve done nothing with it.

Have you read the story?  Have you acted on what we are told in order to experience the pure love and grace of Christ?  I hear all the time that God might exist and this whole Jesus story is a fairy tale adapted over centuries of societal philosophy and hopeful wishing.  I encourage you to test it; don’t believe in vain. My faith in God and the validity of the gospel didn’t really start growing until I started asking the tough questions: is this true? Why do I believe this?  Is there really a God?  The bible is our equation book.  If you read and understand it for what it says and act on it, you will find the proof you need to stand firm in the faith.  Don’t take my word for it.  Don’t take anyone’s word for it.  Take God at His Word and see what happens.