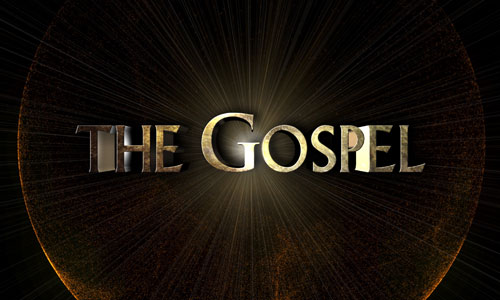 Matthew 4:23-25
23 Jesus was going throughout all Galilee, teaching in their synagogues and proclaiming the gospel of the kingdom, and healing every kind of disease and every kind of sickness among the people. 24 The news about Him spread throughout all Syria; and they brought to Him all who were ill, those suffering with various diseases and pains, demoniacs, epileptics, paralytics; and He healed them. 25 Large crowds followed Him from Galilee and the Decapolis and Jerusalem and Judea and from beyond the Jordan.

Until recently, I never realized that “the gospel” was about the Kingdom of God, not just specifically Jesus. I also didn’t realize until stumbling upon this verse a couple years ago that Jesus too preached the gospel. Maybe I didn’t pay enough attention in Sunday school or maybe it just wasn’t stressed enough, but the Gospel isn’t just about Jesus’ death, burial, and resurrection; it is about the arrival of God’s Kingdom here on earth. John the Baptist preached it, Jesus preached it, the disciples preached it, and now we are to preach it. But what exactly does the Kingdom of God look like?

Jesus didn’t just tell people about the Kingdom, He embodied it and demonstrated it. He didn’t just do it with witty sayings or by making the Pharisees look like fools, He did it by healing every kind of disease and every kind of sickness among the people. I got my first face-to-face experience with this when my wife and I translated for a spiritual healing team back in November (click here to read all about it). It was unbelievable (pun intended) but in seeing and experiencing, we believed. When spreading the news about something as amazing as the presence of the Kingdom of God, you can’t just talk about it. You have to literally put yourself on the line and demonstrate it. This is what Jesus did; this is what He calls us to do.

The gospel isn’t just a feel good message that makes us sleep better at night. It doesn’t give us hope against the boogeyman and isn’t our ticket into paradise when we die. It is the very presence of God in our lives. It is the physical proof of His love, mercy, and restoration to His wholeness. It is the revelation that there is a God and He loves His children. The word “gospel” comes from the original Greek euaggelion where we also get the word evangelism. It’s meaning is more than just “good news,” although that is how it is roughly translated. The gospel in the Christian context is the announcement of the arrival of the Kingdom of God. For so long I thought that just meant that we get to go to heaven when we die. In reality, it means we get to live in the Kingdom HERE and NOW. Let that sink in for a moment.

Jesus didn’t come to earth to put on a magic show and then leave for another 2,000+ years to leave us wondering when He would come back. He came to show us and then give us the keys to God’s Kingdom so we could live in it today. In John, Jesus goes into great detail explaining the importance of the Holy Spirit and that His death, resurrection, and ascension made it possible for us to receive the Spirit and live in the Spirit. He told us that we would do even greater things than He did as a result of the arrival of the Kingdom and the impartation of it upon us through the Spirit.

So why then aren’t we exemplifying, living, and proclaiming the arrival of the Kingdom?