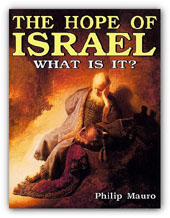 Acts 28:17-22
17 After three days Paul called together those who were the leading men of the Jews, and when they came together, he began saying to them, “Brethren, though I had done nothing against our people or the customs of our fathers, yet I was delivered as a prisoner from Jerusalem into the hands of the Romans. 18 “And when they had examined me, they were willing to release me because there was no ground for putting me to death. 19 “But when the Jews objected, I was forced to appeal to Caesar, not that I had any accusation against my nation. 20 “For this reason, therefore, I requested to see you and to speak with you, for I am wearing this chain for the sake of the hope of Israel.” 21 They said to him, “We have neither received letters from Judea concerning you, nor have any of the brethren come here and reported or spoken anything bad about you. 22 “But we desire to hear from you what your views are; for concerning this sect, it is known to us that it is spoken against everywhere.”

Paul’s mission in Rome was to preach to the Jews there and relate the gospel message to Caesar.  Here, he has begun his discourse to explain to the Jews of Rome why he is in chains.  But what exactly does he mean by “the hope of Israel”?  The short answer is the Gospel of Jesus as the Christ.  The long answer…we will read in the next post.  Although it was written and sent to the growing Christian church in Rome, Paul’s letter to the Romans is an exegesis (technical word for the examination of scripture) that explains the entire process of God’s plan of salvation since the creation of Earth.  This is why it is the first book of the bible I studied and you can get a free copy of this study in devotional format here.  Perhaps the reason why Paul wrote such a long exegesis, aside from making sure they had the whole story (since it isn’t a church he started, he wanted to set the record straight), it was to inform the church so they had a complete knowledge in order to share it with the Jews of Rome.

The Letter to the Romans, although simplified for a Gentile to understand, is certainly qualified material for the Jews (whom grew up being inundated with what we now call the Old Testament).  The phrase “the hope of Israel” isn’t just a feel good idea; it is the very hope of the coming of the Messiah they have been impatiently awaiting for thousands of years.  The hope of Israel is actually explained throughout Paul’s letter to the Romans as he explains mankind’s hopelessness on its own and the hope that is offered and secured through Jesus Christ.  The Greek word that Luke used for “hope,” elpis, represents literally the expectation of salvation.  It is an eternal longing for rescue and that the one who performs this action (hopes) does so with great pleasure.  We can almost liken it to a child anxiously awaiting opening their Christmas gifts; the wait seems almost unbearable but they know what is coming so their anxiety is offset by realizing the prize is worth the wait.  It isn’t a groaning “oh my God I hope this suffering ends soon,” it is a delightful hope that supersedes all suffering and gives the one who is hoping a supernatural sense of security and peace.  This is the hope that Jews learned about and sought for (and those who haven’t come to believe that Jesus is the Christ still hope for).  This is the same hope and peace Paul was referring to when he wrote to the Philippians about hope:

[quote]Rejoice in the Lord always; again I will say, rejoice! 5 Let your gentle spirit be known to all men. The Lord is near. 6 Be anxious for nothing, but in everything by prayer and supplication with thanksgiving let your requests be made known to God. 7 And the peace of God, which surpasses all comprehension, will guard your hearts and your minds in Christ Jesus.[/quote]

This is why the true Christian can rejoice in times of trial, difficulty and despair.  Our hope, the hope of Israel, is supernatural.  Jesus is not of this world and therefore our hope supersedes anything that passes here!  Is this not good news?  Whatever affliction, crisis, problem, or disappointment we have, Christ is our hope above it all knowing that we need not worry or despair.  This is the hope the Jews have been professing for millennia.  So why then is Paul in chains for the sake of this hope?

In Trusting God, we saw God’s promise and purpose for Paul in going to Rome.  God informed Paul:

[quote]”Take courage; for as you have solemnly witnessed to My cause at Jerusalem, so you must witness at Rome also.”[/quote]

What is His cause? The cause of Christ!  God’s cause is telling others about Jesus as the Christ and His salvation offered through His death, burial, and resurrection.  The gospel message, as some would call it, is to be pronounced to the world and then lived out by its hearers to result in the unleashing of the Kingdom of God upon this land.  The hope of Israel, my friends, is the return of order and peace throughout the land that was once seen in the Garden of Eden.  This is the majestic hope that Paul was sent to Rome in chains to preach to the Jews that were wondering, “what is this message he is preaching that is ticking off all the Jews?”

It may seem odd to us that Paul had to endure all the shipwreck and hatred over a course of years in unjust imprisonment just so this crowd of Jews in Rome could hear the message.  After all, there was a growing Christian influence in Rome that now had Paul’s doctrinal explanation in written form, couldn’t they have just gone there to get this information?  As humans, sometimes we need to hear a message from “someone else” before we actually “get it”.  I was told once that someone’s spiritual path is likened to a chain of many links.  Each link is an interaction that influences this spiritual walk and sometimes we as Christians get to be the first link that starts them on the path or the final link that gets to witness their faith in Christ and salvation.  Usually, however, we are just a link somewhere in the middle, adding to the progress of their journey.  These Jews could very well have heard the message from the Roman Church, but they also knew that Paul was a controversial witness to this cause and they wanted to hear it directly from him.

This hope is controversial because it goes against all we know on this earth.  It goes against our nature, our knowledge, our culture, and our experience.  The hope of Israel is the hope of the world.  Yet, when we look around, there really is no other such hope.  This is Why We Need God.  We certainly hope in things and we hope that this or that will help us out of our situation, but we cannot hope in these things in the eternal all-satisfying forever-peaceful way. God’s peace surpasses all comprehension because it is unnatural and incomprehensible; you can only really fully appreciate if you have it.  You cannot really explain it and you cannot wholly convince someone it is real.  You can only point them in the direction of experiencing it themselves.

For those of us who believe, we have the wonderful hope of awaiting Christ’s return.  We know that despite the turmoil and suffering in this world, one day it will be over.  Even though we might long for that day to be here, we know it is worth the wait and it is in that hope of Christ that we are able to function and smile despite the chaos around us.  This is what it means to live in the Kingdom of God now.  This is what Paul was trying to explain in Philippians 1 when he wrote:

[quote]21 For to me, to live is Christ and to die is gain. 22 But if I am to live on in the flesh, this will mean fruitful labor for me; and I do not know which to choose. 23 But I am hard-pressed from both directions, having the desire to depart and be with Christ, for that is very much better; 24 yet to remain on in the flesh is more necessary for your sake.[/quote]

So as God said to Paul, “take courage” for our hope is not in the empty promises of this world, but in the creator of the universe.