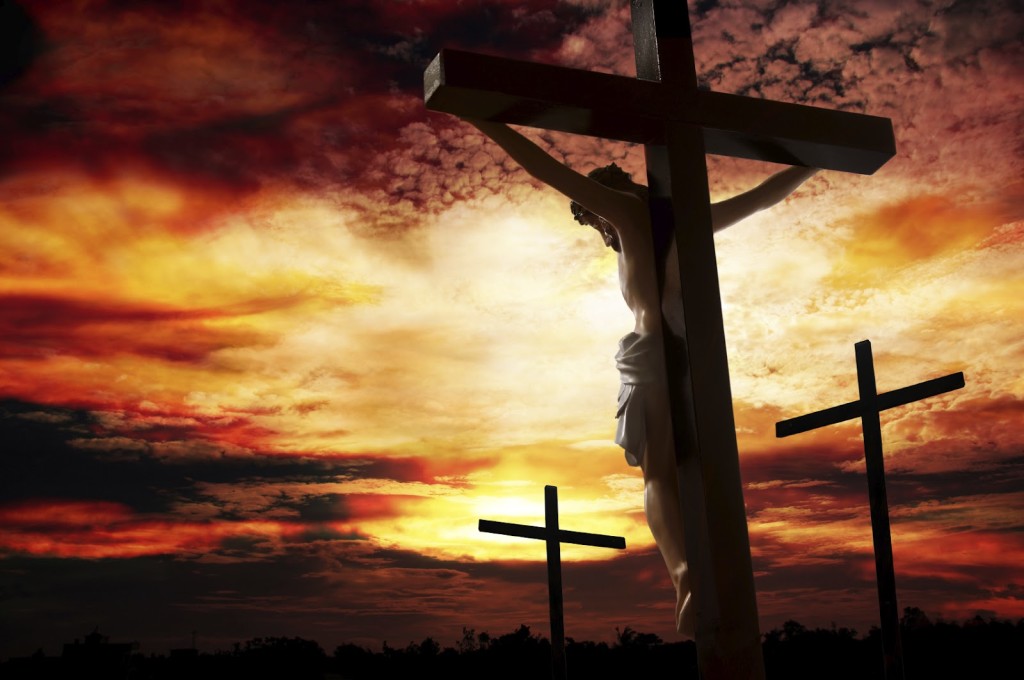 Matthew 27:38-44
38 At that time two robbers were crucified with Him, one on the right and one on the left. 39 And those passing by were hurling abuse at Him, wagging their heads 40 and saying, “You who are going to destroy the temple and rebuild it in three days, save Yourself! If You are the Son of God, come down from the cross.” 41 In the same way the chief priests also, along with the scribes and elders, were mocking Him and saying, 42 “He saved others; He cannot save Himself. He is the King of Israel; let Him now come down from the cross, and we will believe in Him. 43 “HE TRUSTS IN GOD; LET GOD RESCUE Him now, IF HE DELIGHTS IN HIM; for He said, ‘I am the Son of God.’ ” 44 The robbers who had been crucified with Him were also insulting Him with the same words.

There is a movie from 1988 called The Last Temptation of Christ that is about this very part of Jesus’ story and it details what might have happened if Jesus actually climbed down off the cross that day.  We generally think of Jesus’ temptations being once and done when He was fasting in the wilderness for 40 days, but His temptations lasted throughout His lifetime.  Do we think He wasn’t tempted as a child to lie to His parents about something?  Do we believe that while ministering to women He didn’t battle unhealthy thoughts about them?

Thankfully, Jesus was focused on His mission, which was to endure the hardship of death on a cross.  The thieves that were hanging with Him had this to say to Him as recorded in Luke 23:

39 One of the criminals who were hanged there was hurling abuse at Him, saying, “Are You not the Christ? Save Yourself and us!” 40 But the other answered, and rebuking him said, “Do you not even fear God, since you are under the same sentence of condemnation? 41 “And we indeed are suffering justly, for we are receiving what we deserve for our deeds; but this man has done nothing wrong.” 42 And he was saying, “Jesus, remember me when You come in Your kingdom!” 43 And He said to him, “Truly I say to you, today you shall be with Me in Paradise.”

Now, just before that is when Jesus’s famous quote of forgiveness is recorded:

34 But Jesus was saying, “Father, forgive them; for they do not know what they are doing.” And they cast lots, dividing up His garments among themselves

In the wilderness when Jesus was tempted, the scriptures say He was tempted by Satan himself.  But after that, we can see that Jesus was tempted by people who were influenced by Satan’s messengers.  These insults, attacks of pride, and downright mocking came from people who were hardened of heart.  We see the one criminal, even though a criminal, had enough heart to see Jesus’ innocence and was able to repent of his wrongdoing.  When we compare the men to Jesus’ left and right, we see the comparison of the two kinds of people on this earth: those who think Jesus as a joke and those who recognize Him as He is.

Of course, we look at this scene and immediately identify ourselves with the sorry and repentant criminal but as soon as Jesus tells us we are forgiven, how quickly do we become the other criminal or one of the Roman soldiers?  Maybe we don’t hurl insults at Jesus directly, but our actions and the way we live our lives are insulting to the death that Christ endured.  In all of Jesus’ wisdom of how the world operates, knowing that not only was He betrayed to this point but that others would continue to mock Him throughout history until the end of time, if you were in His place would you stay on the cross?  Would you think that even just the repentant criminal hanging with you was worth the sacrifice or would your own will overcome you and just jump off the cross?