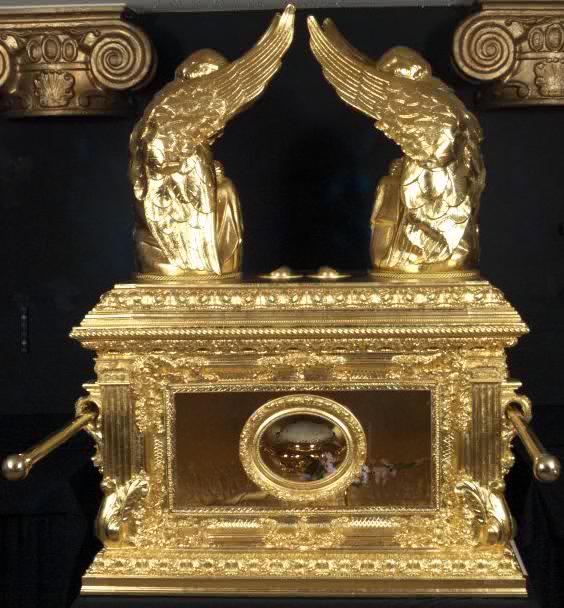 Now even the first covenant had regulations of divine worship and the earthly sanctuary. 2 For there was a tabernacle prepared, the outer one, in which were the lampstand and the table and the sacred bread; this is called the holy place. 3 Behind the second veil there was a tabernacle which is called the Holy of Holies, 4 having a golden altar of incense and the ark of the covenant covered on all sides with gold, in which was a golden jar holding the manna, and Aaron’s rod which budded, and the tables of the covenant; 5 and above it were the cherubim of glory overshadowing the mercy seat; but of these things we cannot now speak in detail. 6 Now when these things have been so prepared, the priests are continually entering the outer tabernacle performing the divine worship, 7 but into the second, only the high priest enters once a year, not without taking blood, which he offers for himself and for the sins of the people committed in ignorance. 8 The Holy Spirit is signifying this, that the way into the holy place has not yet been disclosed while the outer tabernacle is still standing, 9 which is a symbol for the present time. Accordingly both gifts and sacrifices are offered which cannot make the worshiper perfect in conscience, 10 since they relate only to food and drink and various washings, regulations for the body imposed until a time of reformation.

Some of you might have rolled their eyes and just quickly skimmed through what is in today’s passage.  I get it and I had to fight the urge myself.  Being a child who loved watching the movie The Ten Commandments, I know the scene well.  Mix that with a grandfather who absolutely loved studying Jewish custom and history and add the few times I’ve pushed through and read the entirety of the Pentateuch (the first 5 books of the bible).  I already have this preloaded picture of what the tabernacle looked like, the daily goings on, and what happened on the one day a year the high priest entered the Holy of Holies.  But we would be wise to pay attention to what the author is recapping here.  He goes into a lot of detail about what was inside that room, doesn’t he?  I’ve never really paused to think why the Ark of the Covenant was designed the way it was.

The gold covering should be an easy one.  It was (and still is) a precious metal at the time and signifies royalty and wealth.  Let us not think in terms of worldly wealth, however, but wealth as in wealth of life.  Next we have the Cherubim.  The Cherubim are the order of angels assigned specifically to the service of God.  Much like the Marines are always seen around the president of the United States, the Cherubim accompany God wherever He is and goes. They were also charged with protecting the Garden of Eden when man was kicked out.  Let’s take a look at what was inside the ark.

Manna represents God’s provision.  During the 40 years of roaming in the desert, God provided manna as sustenance for Israel.  If you recall, unless the next day was a Sabbath, they weren’t to save any up for the next day because they were to rely on God; for 40 years God provided this every day.  Next is Aaron’s rod which budded; this represents God’s leading.  A leadership decision had to be made and so God had Moses put the rod of the head of each tribe in the tent of meeting with their names on it and the one that budded was the one that God chose.  Israel thought that Moses and Aaron were leading them astray and God had to remind them that it was He who was leading the nation, not men.  Finally we have the tables of the covenant, which is also called the tablets of God’s testimony.  These are the stone tablets which God wrote upon with His finger while Moses was up on Mount Sinai.  They represent the steadfastness of God’s Word: written in stone and preserved over time.

It is upon these things that God rests and which is referred to as the mercy seat.  Until now, it just always seemed like a cool name to me, but unlike American culture, words and terms and names actually have meaning, especially in Jewish culture.  God rests on the solid foundation of His provision, guidance, and word.  If you compare this to the rest of scripture you can see that this is directly related to God the Father, God the Spirit, and God the Son (respectively).  The Father provides, the Spirit Guides, and the Son is the Word.  The mercy seat of God is where He sits when He communicates with us out of love, compassion and mercy.  The judgment seat belongs to Jesus, which is where He will sit upon His return, but until then, we are shown mercy and grace as an opportunity to be reconciled with God.

The point of calling it the mercy seat is revealed at the end of this passage.  What we do now is only temporary.  We are cleansed of our sinfulness but still remember our sinfulness and constantly being pulled back into it as we are deceived by the enemy.  When we are completely restored by the coming of Christ, it is then we will realize the fullness of God’s transformation.  Our current status is in recovery from a life of sin, but we will then be made new.  This is the mercy we are shown because we don’t deserve entrance into God’s presence.  We have access to it even though we repeatedly fall on our faces and fall short of the glory of God.  In the days when God’s Tabernacle existed, access to God was very limited.  The author is detailing this to set up his explanation of what Jesus’ intervention has done for us.