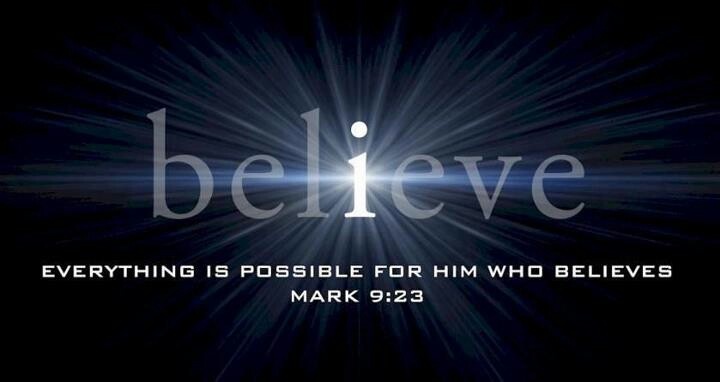 Matthew 9:18-26
18 While He was saying these things to them, a synagogue official came and bowed down before Him, and said, “My daughter has just died; but come and lay Your hand on her, and she will live.” 19 Jesus got up and began to follow him, and so did His disciples. 20 And a woman who had been suffering from a hemorrhage for twelve years, came up behind Him and touched the fringe of His cloak; 21 for she was saying to herself, “If I only touch His garment, I will get well.” 22 But Jesus turning and seeing her said, “Daughter, take courage; your faith has made you well.” At once the woman was made well. 23 When Jesus came into the official’s house, and saw the flute-players and the crowd in noisy disorder, 24 He said, “Leave; for the girl has not died, but is asleep.” And they began laughing at Him. 25 But when the crowd had been sent out, He entered and took her by the hand, and the girl got up. 26 This news spread throughout all that land.

There are two different examples of faith healing in this passage. One is stuck in the middle of another and we can see that while they are related in terms of healing and faith, there is a unique distinction. The official came to Jesus having faith in Him to heal someone else and the woman with the twelve-year hemorrhage had the faith herself. What is the key? Faith. Faith is what heals us. Faith releases God’s power into our lives. Every time someone is “healed by Jesus,” He says, “Your faith ahs made you well.” On the surface level, everyone thought Jesus was doing the healing, but the reality is the power of the Holy Spirit accessed by the faith of the people is what caused the healing. Jesus was just a conduit of this healing.

Part of our issue today in this is that we think it was Jesus doing the healing and since He is no longer roaming the earth, we don’t believe this can happen anymore. Yet, we forget that Jesus’ disciples did the same exact thing, for many years after He ascended into heaven! The thought that this doesn’t happen anymore is a lie by our spiritual enemy. We have come to believe this lie and therefore are lacking the faith to believe that God can and will heal us today. Have you ever thought of going to someone and asking them to revive a family member from the dead? Have you ever imagined fighting through a crowd just to touch someone’s coat so you could be healed of a seemingly untreatable illness? Have you ever asked God to heal you with the expectancy of Him actually doing it?

Unbelief obstructs miracles. When Jesus arrived at the official’s house to revive the daughter, He first tested those in the room. They didn’t believe what He said so He kicked them out to remove the doubt from the room. In Matthew 13 we read about Jesus going through His hometown where He was raised and people didn’t believe who He was, so He wasn’t able to perform many miracles as a result. If the power to heal and perform miracles (even raise people from the dead) was solely reliant upon Him, then it wouldn’t matter if others believed or not, would it? Our faith and trust in God’s goodness and power puts us in a position to receive it. Our faith and trust in God can even help position others to receive it if they cannot do it on their own. There are many cases throughout the gospels where others have petitioned God on their behalf for healing and restoration.

Are you in a position to receive God’s goodness and power? If not, ask God to help you with your unbelief.