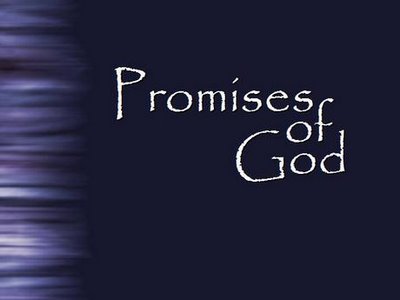 The last verse we read was about being patient for the promises of God.

13 For when God made the promise to Abraham, since He could swear by no one greater, He swore by Himself, 14 saying, “I will surely bless you and I will surely multiply you.” 15 And so, having patiently waited, he obtained the promise. 16 For men swear by one greater than themselves, and with them an oath given as confirmation is an end of every dispute. 17 In the same way God, desiring even more to show to the heirs of the promise the unchangeableness of His purpose, interposed with an oath, 18 so that by two unchangeable things in which it is impossible for God to lie, we who have taken refuge would have strong encouragement to take hold of the hope set before us. 19 This hope we have as an anchor of the soul, a hope both sure and steadfast and one which enters within the veil, 20 where Jesus has entered as a forerunner for us, having become a high priest forever according to the order of Melchizedek.

This passage has a few elements from the Jewish culture and religion we need to make sure we understand before we can grasp the importance of what is being said here.  The practice of making an oath and “swearing to God” was a way of making it more official.  By using God as a witness in covenants, it seemed to make the promise more truthful.  This is why Jesus taught “let your yes be yes and no be no” because the culture had gravitated towards saying, “I swear to God” in a way of solidifying the truth of what someone was saying instead of cultivating a culture of always telling the truth.

The veil in verse 19 refers to the veil that separated the Holy of Holies from the rest of the Jewish temple.  It is what kept the inner sanctum of the temple, which housed the presence of God, separate from the people.  It was forbidden to pass through the veil unless you were properly cleansed and appointed to do so or else you would die, being tarnished and in the presence of God.  The hope and assurance that the author is talking about is that through Christ, we are able to enter into the presence of God without fear of death.  Jesus went before us and paved the way and invited us in.

Next comes the interesting topic of Melchizedek.  He was the king of Salem back in the days of Abram (before he was called Abraham) and was also a high priest of God.  He appears here in the bible and once again in a Psalm and doesn’t get talked about again until this book of Hebrews we are reading.  However, he is very important in Jewish tradition because he is the one who communicated the blessing of Abraham being the father of many nations (read Genesis 14).  Afterwards, God and Abram had a little chat about the extent of Abram’s blessing and future.  The importance of Melchizedek is that he was the first priest of God that the Jews know of; he is known as the original order of priesthood.  Jesus, being the Alpha and Omega (first and last) would need to be of this line of priesthood in order for the Jews to recognize His authority and power and relationship with God.  For those who haven’t studied much of Jewish tradition, it would be difficult to put much importance into Melchizedek being a priest. This will be explained more in the coming chapter.

The point in all this, however, isn’t really about Melchizedek at all; it’s about the promises of God.  God tells us all the time throughout His Word about His promises.  However, we tend to ignore or forget them and then get angry when He doesn’t do what we think He should even though He already told us what is going to happen.  Abraham didn’t even really get to see the fulfillment of God’s promises during his lifetime.  Yes, we all know that he had a son with his barren wife.  We also know that him and his wife had an illegitimate child (through Sarai’s maid) because they grew impatient (something God knew would happen).  But His promise to multiply the blood of Abraham and Sarah remained steadfast.  Throughout the bible as we read God’s promises, we see that they were fulfilled.  Some have not yet been fulfilled and this is what is so important about remaining steadfast in the hope He has given us.

We have not only been given hope by God’s demonstration of fulfilling His promises over the millennia, we have also been given the hope in Christ.  The biggest promise God has given us is that we once again can live in communion with Him, the communion that was broken in the Garden of Eden.  It is this hope that helps us be patient.  Living in God’s Kingdom gives us reason and motivation to wait and look ahead with eagerness of what is to come.  Yet, some of us have grown weary of waiting and have either rejected the hope He has given us or have tried to manipulate God into coming before it is time.

Let us not grow weary.  I had a man tell me not too long ago that we spend a lot of time looking toward and talking about heaven but we forget what God has placed in front of us to do in the meantime.  The Apostle Paul said to the Thessalonians, “But as for you, brethren, do not grow weary of doing good.”  The reason why Jesus hasn’t returned yet is because there is still work to do here.  This is something the Thessalonians suffered from; some members of their community accepted the attitude that, “well, I’m saved and Jesus is coming soon so I’m just going to sit around and wait.”  Or even worse, some think they will be able to wait until the last minute to repent of their actions and finally turn towards God, but this will not be.  Jesus uses a parable to explain the danger of this thinking in Matthew 24:

44 For this reason you also must be ready; for the Son of Man is coming at an hour when you do not think He will. 45 “Who then is the faithful and sensible slave whom his master put in charge of his household to give them their food at the proper time? 46 Blessed is that slave whom his master finds so doing when he comes. 47 Truly I say to you that he will put him in charge of all his possessions. 48 But if that evil slave says in his heart, ‘My master is not coming for a long time,’ 49 and begins to beat his fellow slaves and eat and drink with drunkards; 50 the master of that slave will come on a day when he does not expect him and at an hour which he does not know, 51 and will cut him in pieces and assign him a place with the hypocrites; in that place there will be weeping and gnashing of teeth.

The sad part is that many people don’t understand that by living in communion with God now, we get to experience His glory now.  The cultures of men have twisted the idea that living in communion with God is living by a set of rules like the Pharisees did to prove their own righteousness and as a result we have lost our desire to be righteous.  Yet God clothes us with His righteousness because we cannot earn it on our own!  Living in the Kingdom of God is living in the freedom He created for us.  This hope we have in Christ is that very freedom.  We can trust in God’s promises (which we learn as we read the bible) because He has fulfilled every one thus far.  “But how do we know for sure?”  We don’t, that’s the point of faith.  History has shown us the faithfulness of God and He continues to give us opportunities to trust Him at His word.  Will you trust God for His promises today?