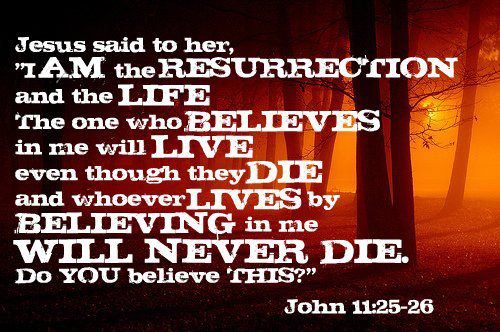 Acts 13:32-42
32 “And we preach to you the good news of the promise made to the fathers, 33 that God has fulfilled this promise to our children in that He raised up Jesus, as it is also written in the second Psalm, ‘YOU ARE MY SON; TODAY I HAVE BEGOTTEN YOU.’ 34 “As for the fact that He raised Him up from the dead, no longer to return to decay, He has spoken in this way: ‘I WILL GIVE YOU THE HOLY and SURE blessings OF DAVID.’ 35 “Therefore He also says in another Psalm, ‘YOU WILL NOT ALLOW YOUR HOLY ONE TO UNDERGO DECAY.’ 36 “For David, after he had served the purpose of God in his own generation, fell asleep, and was laid among his fathers and underwent decay; 37 but He whom God raised did not undergo decay. 38 “Therefore let it be known to you, brethren, that through Him forgiveness of sins is proclaimed to you, 39 and through Him everyone who believes is freed from all things, from which you could not be freed through the Law of Moses. 40 “Therefore take heed, so that the thing spoken of in the Prophets may not come upon you: 41 ‘BEHOLD, YOU SCOFFERS, AND MARVEL, AND PERISH; FOR I AM ACCOMPLISHING A WORK IN YOUR DAYS, A WORK WHICH YOU WILL NEVER BELIEVE, THOUGH SOMEONE SHOULD DESCRIBE IT TO YOU.’ ” 42 As Paul and Barnabas were going out, the people kept begging that these things might be spoken to them the next Sabbath.

The Resurrection is the most important part of the Gospel.  This isn’t to say Jesus’ death on the cross wasn’t important or His burial in the tomb wasn’t important…but without the resurrection, Jesus was just another dead guy.  The complete victory over death and sin was accomplished when Jesus walked out of the tomb on Resurrection Sunday.  In His ministry, Jesus raised others from the dead and gave the disciples the power to do the same.  But when we think about it, how can someone raise themself from the dead?

This is the promise that Paul is referring to in verse 32.  He wasn’t referring to Jesus being raised up as a human to go to the cross, rather that God the Father raised Him from the dead.  The Sadducees had a problem with this as they didn’t believe in resurrection (for anybody).  Other than His doctrine of resurrection, they actually kinda liked Jesus for His message of love and repentance.  Are you a Sadducee?  Do you have problems believing in Jesus’ resurrection?  Daniel Harris wrote an interesting article on the resurrection this past summer and you can read it here if you are interested.

We can very easily look at Jesus’ life and death and appreciate only certain things about it.  He ate with sinners, He introduced what I like to call the “heart” of the law, He rebuked the religious elite who used their piety to put others down and He even died an innocent death.  We can even go as far to believe that He died for our own sins, but without the resurrection, none of it matters.  Even though we see His resurrection as victory over physical death, we must also recognize the spiritual implications of it.  He claimed victory over the spiritual death that we find ourselves in.  Without Jesus’ resurrection, everything else was for naught.  It is interesting how in Ecclesiastes, Solomon in his great wisdom discovers the futility of living to leave a legacy.  Yet, Jesus has left a lasting legacy not because He died, but because He sealed the promise by His resurrection.  Paul notes the prophecies of the promise of God to send an eternal savior to rescue us from our iniquity.  Jesus was the fulfillment of that promise!  He has left an outstanding legacy that for 2,000 years strong is radically changing the lives of men and women around the world.  Yet even King David, the most revered king in Jewish history, is laying in a tomb somewhere decaying.  His legacy is long gone and while people might look back upon his reign in awe and wonder, it no longer continues.  However, the reign of Jesus Christ lives on!  Not only does it live on, but we have been invited to be a part of it.

Are you alive in Jesus’ resurrection?  Have you identified with His death, burial, and resurrection or do you simply pay lip service to the king and go on living your boring dull lives in slavery?  In Romans 6, Paul gives an excellent explanation of why Jesus’ resurrection is so important to our lives today:

3 Or do you not know that all of us who have been baptized into Christ Jesus have been baptized into His death? 4 Therefore we have been buried with Him through baptism into death, so that as Christ was raised from the dead through the glory of the Father, so we too might walk in newness of life. 5 For if we have become united with Him in the likeness of His death, certainly we shall also be in the likeness of His resurrection, 6 knowing this, that our old self was crucified with Him, in order that our body of sin might be done away with, so that we would no longer be slaves to sin; 7 for he who has died is freed from sin. 8 Now if we have died with Christ, we believe that we shall also live with Him, 9 knowing that Christ, having been raised from the dead, is never to die again; death no longer is master over Him. 10 For the death that He died, He died to sin once for all; but the life that He lives, He lives to God. 11 Even so consider yourselves to be dead to sin, but alive to God in Christ Jesus. 12 Therefore do not let sin reign in your mortal body so that you obey its lusts, 13 and do not go on presenting the members of your body to sin as instruments of unrighteousness; but present yourselves to God as those alive from the dead, and your members as instruments of righteousness to God. 14 For sin shall not be master over you, for you are not under law but under grace. 15 What then? Shall we sin because we are not under law but under grace? May it never be!

This is why our baptism (the changing of our heart, not getting dunked in water) is so crucial to the beginning of our spiritual growth.  Jesus said we must die to ourselves in order to be alive in Him.  Will you die to yourself in order to live in the freedom He offers?