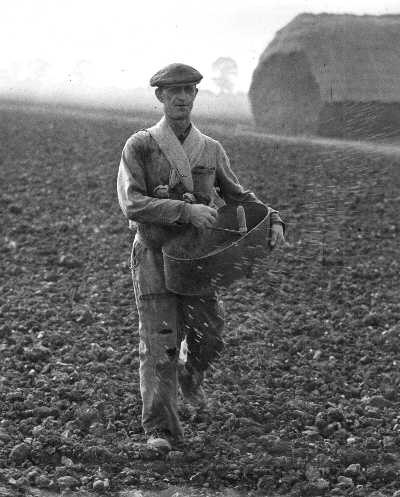 Mark 4:1-20
1 He began to teach again by the sea. And such a very large crowd gathered to Him that He got into a boat in the sea and sat down; and the whole crowd was by the sea on the land. 2 And He was teaching them many things in parables, and was saying to them in His teaching, 3 “Listen to this! Behold, the sower went out to sow; 4 as he was sowing, some seed fell beside the road, and the birds came and ate it up. 5 “Other seed fell on the rocky ground where it did not have much soil; and immediately it sprang up because it had no depth of soil. 6 “And after the sun had risen, it was scorched; and because it had no root, it withered away. 7 “Other seed fell among the thorns, and the thorns came up and choked it, and it yielded no crop. 8 “Other seeds fell into the good soil, and as they grew up and increased, they yielded a crop and produced thirty, sixty, and a hundredfold.” 9 And He was saying, “He who has ears to hear, let him hear.” 10 As soon as He was alone, His followers, along with the twelve, began asking Him about the parables. 11 And He was saying to them, “To you has been given the mystery of the kingdom of God, but those who are outside get everything in parables, 12 so that WHILE SEEING, THEY MAY SEE AND NOT PERCEIVE, AND WHILE HEARING, THEY MAY HEAR AND NOT UNDERSTAND, OTHERWISE THEY MIGHT RETURN AND BE FORGIVEN.” 13 And He said to them, “Do you not understand this parable? How will you understand all the parables? 14 “The sower sows the word. 15 “These are the ones who are beside the road where the word is sown; and when they hear, immediately Satan comes and takes away the word which has been sown in them. 16 “In a similar way these are the ones on whom seed was sown on the rocky places, who, when they hear the word, immediately receive it with joy; 17 and they have no firm root in themselves, but are only temporary; then, when affliction or persecution arises because of the word, immediately they fall away. 18 “And others are the ones on whom seed was sown among the thorns; these are the ones who have heard the word, 19 but the worries of the world, and the deceitfulness of riches, and the desires for other things enter in and choke the word, and it becomes unfruitful. 20 “And those are the ones on whom seed was sown on the good soil; and they hear the word and accept it and bear fruit, thirty, sixty, and a hundredfold.”

Jesus used parables or analogies to explain different aspects of the Kingdom of God.  It seems a bit peculiar that He would speak in parables instead of telling the people straight.  It might be frustrating that it seemed as though Jesus was trying to trick the people or hide the principles of the Kingdom from them just to fulfill prophecy.  There is something more profound at work here, however.  The issue isn’t hiding principles from His hearers, but to see how willing they were to seek first the Kingdom of God.  His followers (not just his 12, but others as well) wanted to understand because they hungered and thirsted for God’s righteousness in their lives.  It was like a test to see if these people showed up just to be told what they wanted to hear or if they truly wanted to learn more about God’s Kingdom.

In this parable, Jesus tells us that while faith comes from hearing, not all who hear will become disciples of His.  There are 4 types of people that will hear God’s message: one who doesn’t respond at all, one who responds quickly but then burns out like a brief candle, one who gives more attention to the turbulence of the world instead of God’s Word, and one who receives it and matures fully bearing fruit.  There are two lessons we can get from this parable.

We get to identify with which kind of seed we are.  Maybe we are quick to assume that we are the fourth seed, but we must make sure that we aren’t deceived into thinking we aren’t one of the other three.  This is how we are subtly enticed away from God and His Kingdom because we think we have it all together.  We think that because we have the desire to be that way, that we are and therefore the other three types of people we pity, shame, or ignore.

The other lesson is that we are called to make disciples and teach others to do what Jesus has commanded us.  There will be only a 25% success rate of you telling people about Christ and them growing to be full blown disciples.  Some won’t care at all what you have to say.  Others will burn with passion for Christ but you will see it was only an outward show, not a reflection of a change in their heart.  Some will grow in Christ but they will not be able to let go of their troubles and instead will let the world dictate their life and path instead of Him.  Then there are the “success stories” that we always want to hear more about and hope that everyone we talk to about Christ will mature into.  We need to recognize, however, that Jesus’ point here is that it won’t always happen.  If we have a correct assessment of what the results will be, we won’t take it as personally when someone doesn’t come to Christ or does but fades away.  As much as we hope all will come to Christ, He is telling us here that it won’t happen that way.

So which seed are you?  Don’t be quick to answer #4 and be misled by what you want to be because you will have a grave disappointment if that is not who you are.  It isn’t to say that if you are one of the other three you are less of a person, but that you realize where you are and how much harder you have to work to be a follower of Christ and seek first His Kingdom.