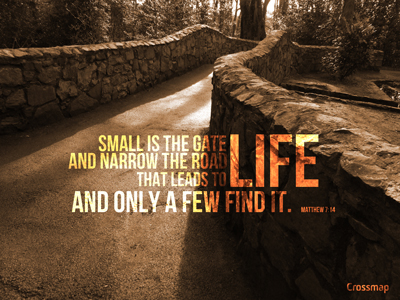 We have heard and maybe used the term, “walking the straight and narrow,” referring to “being good.” But what specifically does it represent? We get this term from the above passage in Jesus’ sermon. Unfortunately, the saying infers that we get to heaven by being good and we know we cannot earn God’s grace: it is a gift. Before being called Christians, followers of Christ (i.e. disciples) were called “those of The Way.” It signified that they behaved differently than the rest. Considered merely a sect of Judaism, the general population didn’t know what to call it because it was nothing like they had ever seen before. These men and women were peculiar in regards to human ways but were still fully human (like Jesus). Eventually someone figured out that they were emulating Christ and thus called Christians. The Way, then, is the path to righteousness or following Jesus in life. When He was on earth, many people followed Jesus around on foot and by boat, but their true followership was evident after He ascended and they continued following His ways. They continued being disciples of His after He was gone, possible only by the Holy Spirit. In John 10, Jesus explains that He is the only way to salvation or into heaven:

7 So Jesus said to them again, “Truly, truly, I say to you, I am the door of the sheep. 8 “All who came before Me are thieves and robbers, but the sheep did not hear them. 9 “I am the door; if anyone enters through Me, he will be saved, and will go in and out and find pasture. 10 “The thief comes only to steal and kill and destroy; I came that they may have life, and have it abundantly. 11 “I am the good shepherd; the good shepherd lays down His life for the sheep.

Jesus laid His life down for us and thus became the door into heaven. Jesus is the Way and the Door. He is the way of life and the door into heaven. He has blessed us with both so that we may be saved and live the life we have been created to live. He restores our souls to its original intent. We cannot find the door without knowing the Way. The apostle Paul explains this well in Ephesians 2:

1 And you were dead in your trespasses and sins, 2 in which you formerly walked according to the course of this world, according to the prince of the power of the air, of the spirit that is now working in the sons of disobedience. 3 Among them we too all formerly lived in the lusts of our flesh, indulging the desires of the flesh and of the mind, and were by nature children of wrath, even as the rest. 4 But God, being rich in mercy, because of His great love with which He loved us, 5 even when we were dead in our transgressions, made us alive together with Christ (by grace you have been saved), 6 and raised us up with Him, and seated us with Him in the heavenly places in Christ Jesus, 7 so that in the ages to come He might show the surpassing riches of His grace in kindness toward us in Christ Jesus. 8 For by grace you have been saved through faith; and that not of yourselves, it is the gift of God; 9 not as a result of works, so that no one may boast.

Our steps of faith following Jesus in His Way are what bring us to the Door of Grace to walk through and into salvation. Our biggest problem, however, is that we don’t want to let go of everything that has been weighing us down and holding us back. The gate is narrow, so we cannot walk through it carrying all of our junk. When Jesus says, “follow me,” He doesn’t say, “and bring all your junk with you.” He tells us to abandon all and follow Him completely. Don’t even bring supplies; all your needs will be taken care of. We have already read about worry and serving wealth and material possessions. If we seek first His Kingdom, we won’t have to worry about anything. Yes it is scary and no, we have no idea what will happen. But we will know we are walking in God’s will and that is all that matters