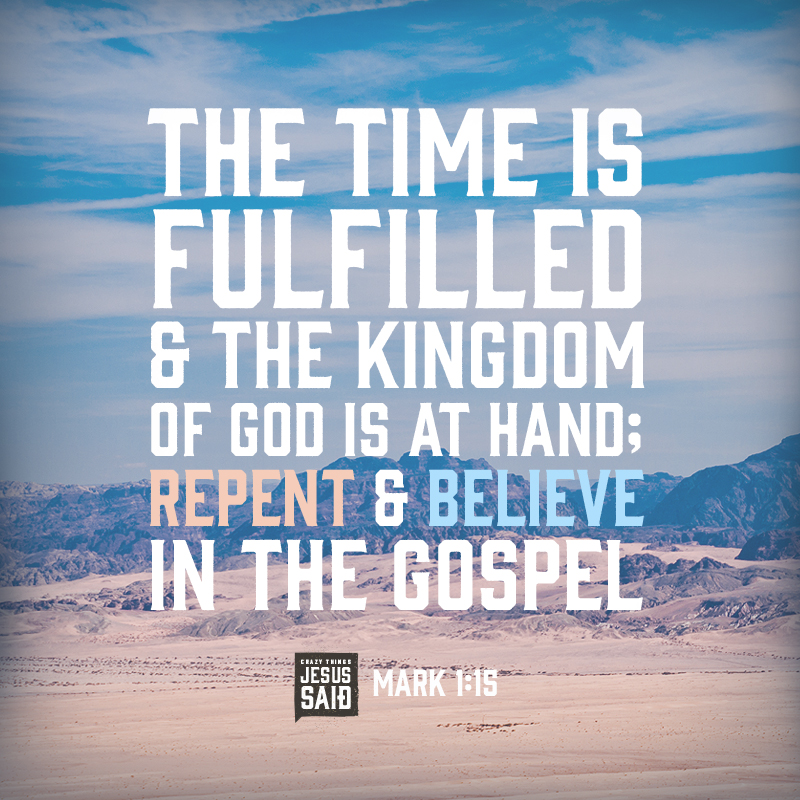 Mark 1:14-20
14 Now after John had been taken into custody, Jesus came into Galilee, preaching the gospel of God, 15 and saying, “The time is fulfilled, and the kingdom of God is at hand; repent and believe in the gospel.” 16 As He was going along by the Sea of Galilee, He saw Simon and Andrew, the brother of Simon, casting a net in the sea; for they were fishermen. 17 And Jesus said to them, “Follow Me, and I will make you become fishers of men.” 18 Immediately they left their nets and followed Him. 19 Going on a little farther, He saw James the son of Zebedee, and John his brother, who were also in the boat mending the nets. 20 Immediately He called them; and they left their father Zebedee in the boat with the hired servants, and went away to follow Him.

Today’s passage marks the beginning of Jesus’ ministry on earth.  John the Baptist fulfilled his duty of paving the way for Jesus’ entrance onto the scene and now has been “pulled away”.  While we read this passage of Jesus’ collection of his close 12 disciples, the real key to understand is what is said in verse 15.

The Time is Fulfilled
This phrase is specific.  It doesn’t just mean, “it’s time to pull the bread out of the oven.”  It is more of a statement declaring the fulfillment of prophecy.  Jesus’ proclamation that the time is fulfilled signifies that something grand has happened and we should open our eyes to see what it is.  Too often we gloss over the importance of this.  If we believe that what is stated in the bible is important, then Jesus’ recorded words in the bible are even more important.  Let us not demean the importance of this little phrase that has big importance.  This is what Jesus and all the apostles proclaimed.  As we read the other books in the New Testament, we see this message repeated to Jews and Gentiles alike.  Jesus’ arrival in time is something that was professed to happen for thousands of years.  When He began His ministry, He proclaimed, “The wait is over.”

The Kingdom of God is at Hand
One of the problems I have had for a long time is fully understanding what the Kingdom of God represents.  It is a very succinct and specific terminology that we have turned into a “churchy” word instead of trying to fully recognize its implications.  We might think of the medieval ages with knights, drawbridges, and a princess trapped in a tower by an angry dragon.  This is actually the closest representation we have in the physical world to understanding the Kingdom of God but we must be careful to not let it dictate the full understanding of God’s Kingdom.  The original word used to depict “kingdom” is basileia, which represents not necessarily a physical realm of land but an area of influence.  If we can break out of our limited thinking for a moment, we might be able to understand that God’s reign on earth isn’t about land but hearts.  His reign in our hearts is where we witness God’s Kingdom, not in a marked piece of real estate.

Repent and Believe in the Gospel
This is the Gospel call.  Throughout the bible, this is the message given whenever one realizes their sinfulness, God’s existence, and their separation from Him.  But what exactly does it mean to repent and believe?  Again, we are confused with what has become church lingo instead of understanding the significance of such a call.  We can see that repentance and belief are crucial to being able to follow Jesus as he begins assembling his team.  “Repent” means to turn away or change your mind from your current way of doing things.  In the case of sinfulness and our relationship with God, we see that we must not just turn away from our sin, but towards God.  In fact, we will find that it is easier to focus on turning towards God than away from sin because sin is so inviting and tempting.  To believe is to trust God for what He says.  In this case, Jesus is calling others to follow, believe, and emulate Him in order to experience the Reign of God in their hearts and subsequently their lives.  This is the opportunity we are afforded.  We are not saved from hell; we are saved for God’s Kingdom.  We get to be heirs of the creator of the universe once more!  The gospel is the Good News of Christ.  It is the knowledge that God’s reign has returned to earth and we get to be a part of it.

These principles are the base of Christianity.  Fortunately the majority of us have been taught these basic principles.  Unfortunately we have turned them into catch phrases instead of a way of life.  The Gospel isn’t a fancy way of talking about Jesus, it is a reality of freedom that supersedes anything on this earth.  How can we better recognize this in our own lives?  How can we live more in God’s Kingdom and share it with others?  How can we better repent and believe in a way that our belief is evident in our daily lives?