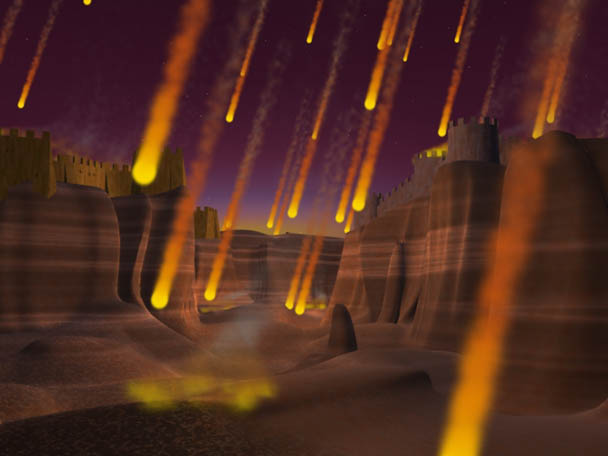 2 But false prophets also arose among the people, just as there will also be false teachers among you, who will secretly introduce destructive heresies, even denying the Master who bought them, bringing swift destruction upon themselves. 2 Many will follow their sensuality, and because of them the way of the truth will be maligned; 3 and in their greed they will exploit you with false words; their judgment from long ago is not idle, and their destruction is not asleep. 4 For if God did not spare angels when they sinned, but cast them into hell and committed them to pits of darkness, reserved for judgment; 5 and did not spare the ancient world, but preserved Noah, a preacher of righteousness, with seven others, when He brought a flood upon the world of the ungodly; 6 and if He condemned the cities of Sodom and Gomorrah to destruction by reducing them to ashes, having made them an example to those who would live ungodly lives thereafter; 7 and if He rescued righteous Lot, oppressed by the sensual conduct of unprincipled men 8 (for by what he saw and heard that righteous man, while living among them, felt his righteous soul tormented day after day by their lawless deeds), 9 then the Lord knows how to rescue the godly from temptation, and to keep the unrighteous under punishment for the day of judgment, 10 and especially those who indulge the flesh in its corrupt desires and despise authority.

I know today’s passage is a bit lengthy, but I feel like we have to get the whole idea and cutting this one apart would miss Peter’s point.  He actually continues on after this to discuss more of what he terms “the ungodly,” but I think this is good for today.

Peter starts this part of his letter by warning against false prophets.  This tends to be a reoccurring theme from the Apostles in their writings; it is important to not forget the existence of false prophets.  False prophets are those who have fallen to the twisted lies of the enemy, those who have believed the distortions of scripture (even though the truth is clearly written and even though many false prophets profess that the bible is the infallible word of God, they ignore it because of pride), and continue on their path of destruction despite the exhortation of others.

Verse 2 in this translation uses a bit of a peculiar term, many will follow their sensuality, and it is important we understand what the author means here.  The original Greek, apoleia, refers to a destructive path, indicating the road to or the state of being in eternal misery (ie hell).  Notice how it all starts though, in secret, meaning we may not necessarily recognize right away what is happening, but it will be destructive nonetheless.  This is why we must always be on the alert.  I cannot stress enough how important it is for us to get our heads in the bible and learn it.  Some think this means they have to study it for 3 hours a day from the start and by the end of the week they get sick at the thought of reading more.  I was talking with some friends last week about getting in the habit of studying and learning from the bible every day.  There are thousands of reading and study programs out there.  Subscribing to this blog is one of them.  It’s not just about reading the words on paper, but understanding and internalizing what we read.  We must not forget that we are all unique, we all have our limits, and that we will all absorb and understand the material from different methods.  It’s just like in school: some people have to write every single word down to absorb it, others simply need to listen to the instructor, while others need to repetitively study and restudy the material before it starts to sink it.  Each way is perfect for the person who needs to do it that way.  Regardless of how we do it, we must create the spiritual discipline of studying and knowing the truth in God’s word.

Verse 3 mentions a word that we underestimate: exploit.  A lot of people limit this concept to just money.  They think that they aren’t being exploited just because they aren’t throwing a dollar in the basket as it gets passed around.  But exploitation can occur in many other ways.  They can exploit you just by getting you to keep coming back.  We discussed this from a different perspective in Tickled Pink, where Paul warned us against falling prey to false teachers and prophets telling us what we want to hear instead of what we need to hear.  Just think about it (and this is by no means a criticism against churches with huge congregations), but sometimes someone just wants an inordinate amount of attendees whether it is for egotistical reasons or to make more money by selling books based on popularity; neither of these methods exploit you by taking your money or getting you to pay.  The biggest exploitation, however, is leading your heart away from God’s will and out of relationship with Him.  This is what your spiritual enemy wants and he will stop at nothing to make it happen.

Let’s remember that in the first chapter of this letter, Peter talked about knowing for sure the truth of God not just by knowledge, but also by experience.  So then, we must act upon what we read and learn in our bible study. Peter actually uses here some recorded experiences to describe to us what God’s deliverance from evil societies looks like.  He mentions Lot, Noah, and the sinful generations that God saved them from.  Peter urges us to not lose hope and keep steadfast in the faith that those around us who are acting outside the will of God, even though it seems as though they are “getting away with it,” that their time is coming.  Peter is reminding us of these things so that we don’t fall away and out of relationship with God because we have fallen prey to what Peter calls the lusts of deceit while simultaneously reminding us of the dangers of doing so.  This isn’t a warning to scare us, but rather some worthwhile advice from a guy who knows what is going to happen.  Here, Peter is acting as a prophet to warn us against following those who preach and teach outside of the truth of God.  He will preserve us despite our deteriorating society.