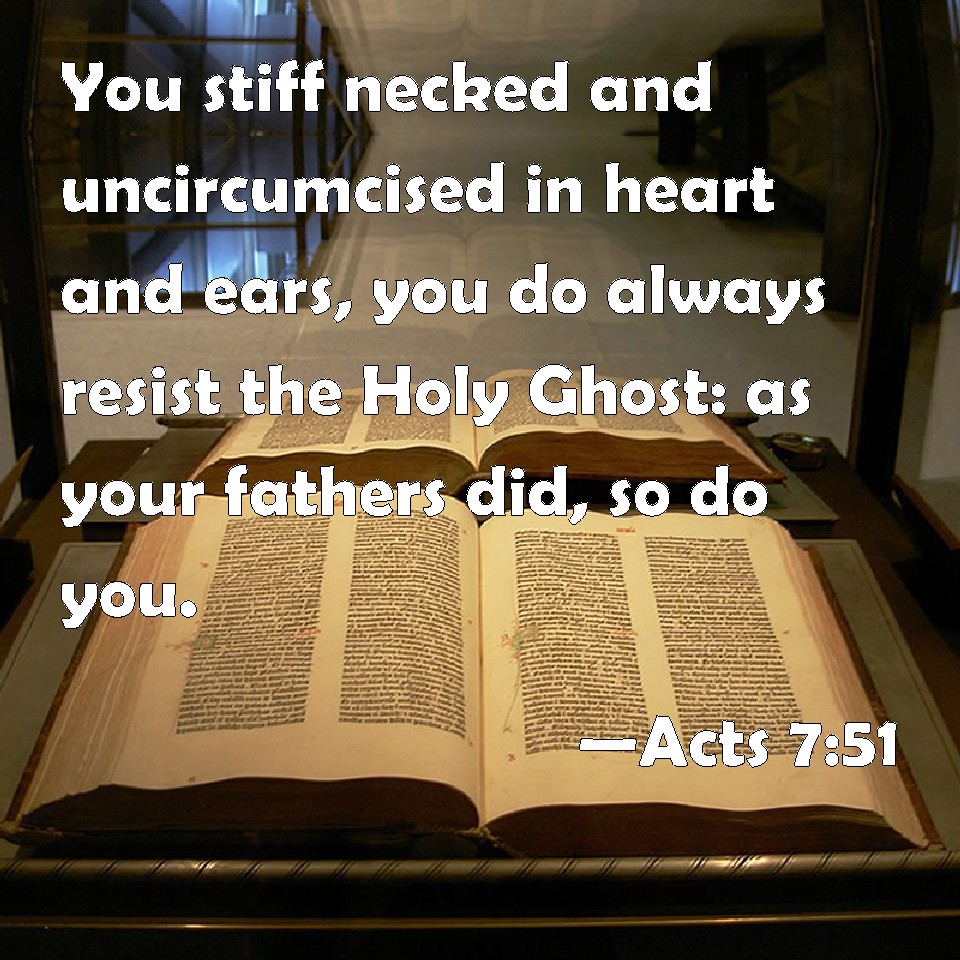 Acts 7:46-53
46 “David found favor in God’s sight, and asked that he might find a dwelling place for the God of Jacob. 47 “But it was Solomon who built a house for Him. 48 “However, the Most High does not dwell in houses made by human hands; as the prophet says: 49 ‘HEAVEN IS MY THRONE, AND EARTH IS THE FOOTSTOOL OF MY FEET; WHAT KIND OF HOUSE WILL YOU BUILD FOR ME?’ says the Lord, ‘OR WHAT PLACE IS THERE FOR MY REPOSE? 50 ‘WAS IT NOT MY HAND WHICH MADE ALL THESE THINGS?’ 51 “You men who are stiff-necked and uncircumcised in heart and ears are always resisting the Holy Spirit; you are doing just as your fathers did. 52 “Which one of the prophets did your fathers not persecute? They killed those who had previously announced the coming of the Righteous One, whose betrayers and murderers you have now become; 53 you who received the law as ordained by angels, and yet did not keep it.”

Stephen ends his sermon on a pretty tough note!  I like how he uses David and Solomon to point out the iniquities of the Pharisees he is addressing.  David and Solomon were two great spiritual giants from the Old Testament.  Solomon was the richest king and David was a man after God’s own heart.  Yet Stephen points out their own shortsightedness in their relationship with God.  His point rests in the center of this passage.

In Ephesians 4, the apostle Paul is instructing them about what it looks like to be a Christian.  One of his talking points is:

We keep missing the point!  Stephen is calling out these religious elite who act as though they are the say all, end all to scripture and God but all they do is talk!  As James would say, “show me your faith without deeds and I’ll show you my faith through deeds.”  It’s a waste, really, that those who are well versed in scripture do not practice what they preach.  To clarify, I don’t say this to scoff at the Pharisees, but those of us who do this very thing today!  Even David and Solomon didn’t get the bigger picture as they wanted to build a temple to house God (as the original tabernacle) but even still this never actually contained God.  It was just a place where man could live in His presence and meet with Him.  Now, however, WE are the meeting place between man and God, yet we continue to ignore it.

We constantly are trying to fit God in our own personal secrets box.  Whether physically or ideally, we want God to conform to our own way of doing things instead of us recognizing His sovereignty.  Every theological debate or discussion I have been in that has gone downhill and hasn’t amounted to anything was a result of at least one of us trying to define and constrain God instead of understanding that He isn’t as easily defined as we would like Him to be.  I think this scares us, which is what actually makes us distance ourselves from His glory instead of drawing nearer to Him.

Stephen’s assertion that these men were stiff-necked (a term used to describe the ignorance of Israel in the Old Testament) and uncircumcised of heart (a newer term that Jesus used to describe the religious who knew nothing of God) was a slap in the face.  Sometimes, however, we need a slap in the face!  We need to wake up and recognize our own religiosity is getting in the way of our relationship with God!  We have become mummies moaning and groaning back and forth to church or small group just because it’s what we should do instead of being what we want to do.  Circumcision represented the old covenant between God and man that man would serve God and God would declare them His people.

Yet, the point behind it all is not to be branded as part of the club just because of circumcision (does that mean women can’t be a part of God’s family?).  Rather, it is our heart condition that God is looking at.  Why do we do what we do?  Do we continually seek out God’s righteousness and His face or are we going after things for our own pleasure and gain?  How have you grown to be uncircumcised of heart and how can you repent of it?