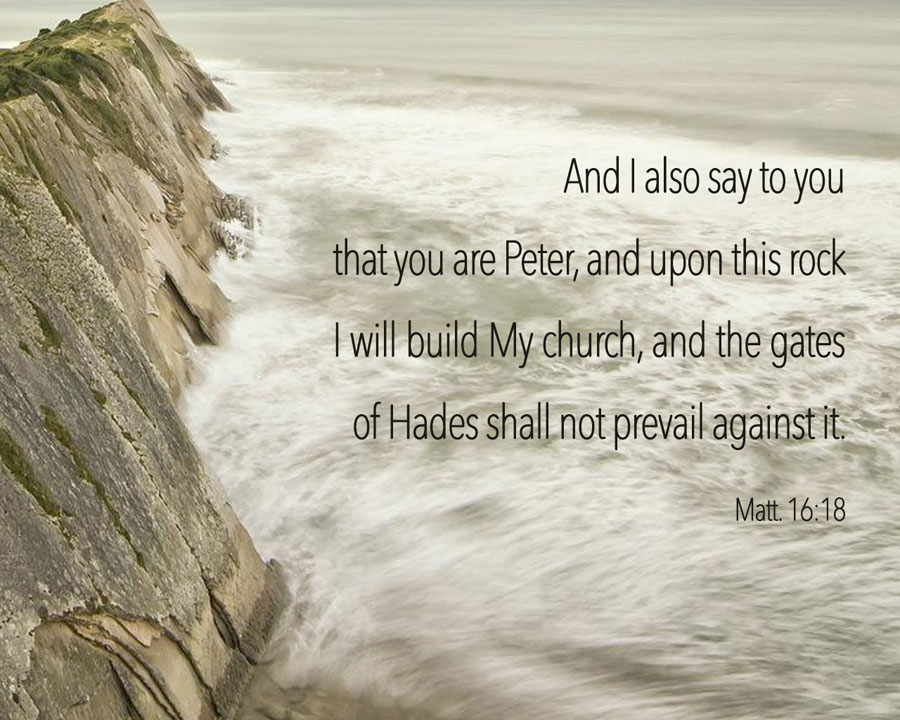 Matthew 16:13-19
13 Now when Jesus came into the district of Caesarea Philippi, He was asking His disciples, “Who do people say that the Son of Man is?” 14 And they said, “Some say John the Baptist; and others, Elijah; but still others, Jeremiah, or one of the prophets.” 15 He said to them, “But who do you say that I am?” 16 Simon Peter answered, “You are the Christ, the Son of the living God.” 17 And Jesus said to him, “Blessed are you, Simon Barjona, because flesh and blood did not reveal this to you, but My Father who is in heaven. 18 “I also say to you that you are Peter, and upon this rock I will build My church; and the gates of Hades will not overpower it. 19 “I will give you the keys of the kingdom of heaven; and whatever you bind on earth shall have been bound in heaven, and whatever you loose on earth shall have been loosed in heaven.”

Years ago in mission’s school one of our teachers took a sidebar to tell us about his idea behind this story. He said it started when he was studying the bible one day and wondered why Jesus would go to Caesarea Philippi to teach this lesson to the disciples. After doing some research (a brief overview can be found here) he came to discover that in this area was a pagan worship area where people worshipped the god Pan, a half goat/half man creature. There is a deep cave there, which became known to the Jews as the gates of Hades because during a yearly ritual, demons would come out and manipulate Pan’s followers. They would throw offerings and sacrifices into the cave. It was a forbidden place to Jews, known for its abundance of evil. Jesus walked right up to it and said that even this place would not prevail against His church! Centuries later a church was built in this town.

Yet when we read this passage, we focus on Peter. Jesus was not referring to Peter, even though he grew up to become the “leader” of the apostolic movement and guide of the group of disciples. If you pay attention to Jesus’ wording, He is simply referring to the meaning of Peter’s name (rock) to make His point. When He says, “Upon this rock…” He isn’t talking about Peter, rather the revelation from God. In verse 16 Peter answers Jesus by calling Him “the Christ, Son of the living God.” God’s Kingdom is never about individual people, but Himself. He is the King and it is His Kingdom. It has never been about Peter nor should we make it as such.

When we can handle it, God will reveal to us His truth. This truth that God the Father revealed to Peter is foundational for the expansion of God’s Kingdom here on earth. Can all accept it? Too many are caught up in their worldliness. This is why Jesus states that He will give His disciples the keys to the Kingdom of Heaven because then we will be able to unleash heaven on earth. The gates of Hades might not like that very much, but they have no control over it. It is God’s revelation of Jesus as the Christ that is the rock of the church. Peter has come and gone but Jesus’ lordship remains. If we continue to stand upon this rock, then we as the church will never falter.

I couldn’t decide between these two hymns so here is the classic you probably thought about while reading today’s post: