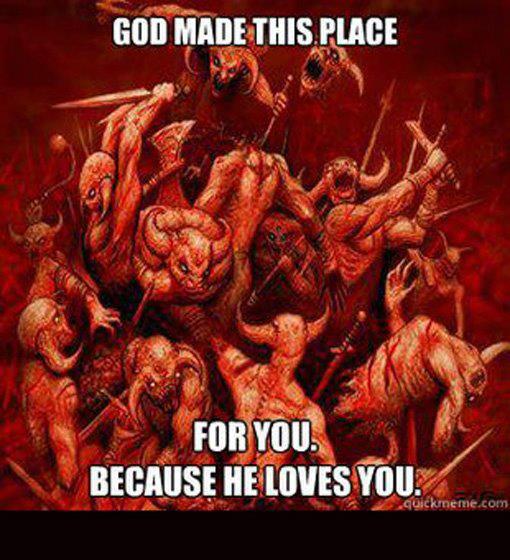 14 For we have become partakers of Christ, if we hold fast the beginning of our assurance firm until the end, 15 while it is said,

“Today if you hear His voice,

Do not harden your hearts, as when they provoked Me.”

16 For who provoked Him when they had heard? Indeed, did not all those who came out of Egypt led by Moses? 17 And with whom was He angry for forty years? Was it not with those who sinned, whose bodies fell in the wilderness? 18 And to whom did He swear that they would not enter His rest, but to those who were disobedient? 19 So we see that they were not able to enter because of unbelief.

When I first read this passage, I was thinking with custom: Israel ticked of God so He smote them.  This is what culture and tradition dictates who God in the Old Testament was (and sometimes who He is today).  This isn’t necessarily the case.  I’m not denying that God says, “vengeance is mine,” but we must remember that it isn’t always about Him taking vengeance.  He will certainly have his turn at those who actively oppose Him, but that is something different altogether.  I’ve heard some people ask, “if God is so loving, why does He send people to hell?”  This is such an uneducated question.  The truth is that people choose go to hell because they refuse to listen to what He is saying.  The warnings and testimonies and scriptures all point to this.  Our disobedience has a consequence.  Think about children today who are disobedient; do they not provoke anger of their parents and result in a consequence of negative reinforcement?  His frustration and anger with us is that we will not listen and as a result He knows what is going to happen.  Just like a parent warning their child not to rob banks; it isn’t because they don’t love them, rather because they love them and don’t want them to have to suffer the consequences.

We talked about falling out of faith and it’s implications.  The author is now touching upon the consequences of unbelief and unfaithfulness.  As I read ahead a little, I see that the author is going to go into more detail and this is just the preamble.  Too often we take it that God hates us because we refuse to revere Him as God so He smites us.  However, the truth is that it is simply the way the system is set up.  We cannot be in communion with God if we are enveloped in sinfulness.  It isn’t because He doesn’t love us as much, it’s because in order to survive being in His presence, we must be without blemish.  God’s anger isn’t about us thumbing our nose at Him, it’s about Him wanting to be close with us and putting in the work so that it is possible and still we reject Him.  That’s frustrating! God, being omniscient and the creator of all things, knows how it works and has been trying to tell us since the beginning of time.  Yet, we ignore what He has to say and try doing it on our own.  He’s given us an instruction manual for life and we toss it in the junk drawer “just in case” and try to put things together our own way.

Instead of us shaking our fist at God for being unjust and ignoring what He is telling us, maybe we should shut up and listen.   Our pride and self-righteousness causes us to ignore sound advice and direction from The One who already knows it all!  It would be one thing if He kept it all a secret from us and we had to just figure it out or be damned.  But we have the information, we just refuse to act on it.  I was in a meeting with our local pastor this past week and a bunch of men going through struggles in their lives.  “You all know the bible, some of you by heart, but you refuse to put it to use,” he exhorted them.  What good is having the information and even memorizing it if we aren’t going to act upon it?

This topic of faith, vengeance, damnation, hell, and going to heaven is this revolving circle of warped perspectives that detracts us from the truth of God.  We ask the wrong questions and accept the false answers.  The enemy has caused us to see things from a worldly perspective instead of a spiritual perspective.  Instead of asking why God does this and that (which we don’t agree with), why don’t we ask why we do what we do that gets us in trouble?  You can see it in our society today when school officials are harassed because someone’s child got in trouble instead of asking the perpetrator what they did wrong.  I read an article just the other day about two armed robbers shot and killed by a citizen who was legally carrying a concealed weapon, tried to subdue the criminals without injury, and shot them when they pulled their guns on him.  The families are now trying to sue the shooter for wrongful death.  How warped has our perspective of injustice become?

No wonder we provoke the Lord to anger, we’ve become morally idiotic!  We don’t even care what is right or wrong anymore, we just care about ourselves.  We cannot accept the truth when is smacks us in the face.  It’s amazing that the author of Hebrews wrote this over 1,000 years ago and it still applies today.  It’s dumbfounding how much truth I continue to find in the scriptures and how we continuously miss it.  The author is saying, “Look, you’re headed down the wrong path which is leading to destruction.  It’s not that hard to turn around (repent) and put your faith in God.”  Atheists claim they have no faith, but in reality they have faith that nothing exists.  Faith is trust; belief is being open to the fact that something may be true that you cannot 100% prove.  Refusing to believe in the existence of God will only lead to suffering and anguish.

Why are you suffering today?