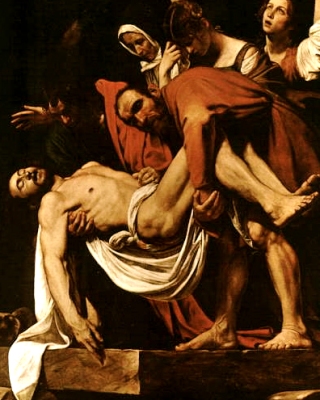 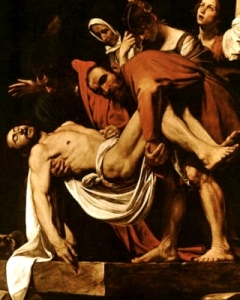 Mark 15:40-47
40 There were also some women looking on from a distance, among whom were Mary Magdalene, and Mary the mother of James the Less and Joses, and Salome. 41 When He was in Galilee, they used to follow Him and minister to Him; and there were many other women who came up with Him to Jerusalem. 42 When evening had already come, because it was the preparation day, that is, the day before the Sabbath, 43 Joseph of Arimathea came, a prominent member of the Council, who himself was waiting for the kingdom of God; and he gathered up courage and went in before Pilate, and asked for the body of Jesus. 44 Pilate wondered if He was dead by this time, and summoning the centurion, he questioned him as to whether He was already dead. 45 And ascertaining this from the centurion, he granted the body to Joseph. 46 Joseph bought a linen cloth, took Him down, wrapped Him in the linen cloth and laid Him in a tomb which had been hewn out in the rock; and he rolled a stone against the entrance of the tomb. 47 Mary Magdalene and Mary the mother of Joses were looking on to see where He was laid.

This is a solemn and often neglected scene in the story of Jesus’ death. It isn’t very exciting and generally doesn’t sell many books or movies. But, it is important nonetheless. We see in the distance three women: Mary, Mary Magdalene, and Salome looking on. Even Jesus’ family had gone home, probably under John’s care (read John 19). Yet these women stayed by Jesus even after He died. We can speculate that they had trouble letting go or that they were standing by just waiting for Jesus to wake up. Regardless of the specific reason, they stayed loyal to Him even in death. This is something we do not even see happen with the disciples, whom after a day or two just returned to their regular lives from before they had met Jesus.

Joseph of Arimathea is an interesting fellow. He was a member of the high priestly order who most likely observed all that happened this day that Jesus was crucified. He knew of the commotion that Jesus stirred up during His ministry. He recognized that when Jesus went quietly to the cross as an innocent man, it was time to sacrifice his life as well for what he believed. This was the gathering up of courage we read about in verse 43. How many times have we had to gather up courage to act in faith? Joseph simply wanted to do the right thing so that Jesus’ body wasn’t desecrated by the Jews or eaten by the vultures the next day (since it was the Sabbath, nobody would have been allowed to touch the body until the following day). Joseph was activating his faith by putting into action what he believed was right. Even though he belonged to the high order religious council, he moved forward to help bury Jesus’ body even though the religious elite were happy He was dead.

The women on the hill observing Jesus from a distance and Joseph of Arimathea had something in common: hope. Even through Jesus’ death they maintained their hope in Him as the Messiah even when nobody else did. The women remained attached to Jesus and Joseph was inspired to care for the body of Jesus. This is tremendous. It is actually easier for us knowing the whole story to hope in Jesus than it would have been for them, not knowing if He was coming back from the dead in a couple days. Can you imagine the amount of faith this would take? Maybe this doesn’t seem too outlandish for the women since they supported His ministry and followed Him wherever He went but Joseph, who had everything to lose and only knew Jesus from a distance, acted on what he had believed this whole time.

Do you trust in Jesus this much?