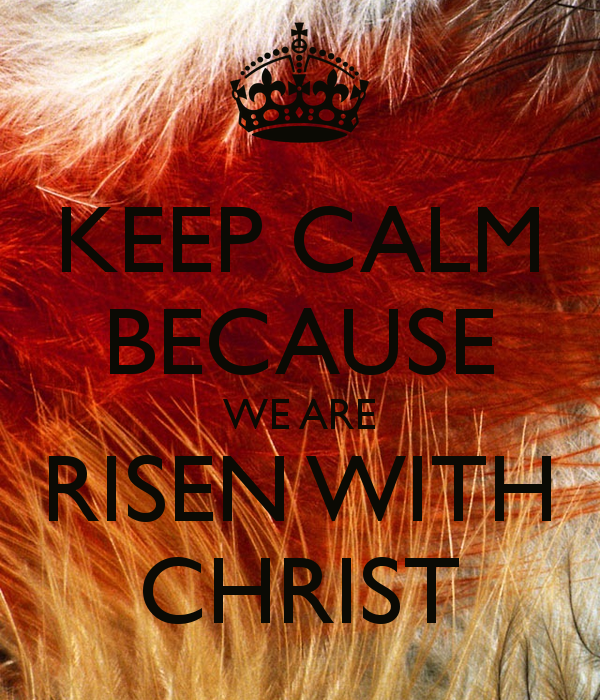 Matthew 28:1-10
1 Now after the Sabbath, as it began to dawn toward the first day of the week, Mary Magdalene and the other Mary came to look at the grave. 2 And behold, a severe earthquake had occurred, for an angel of the Lord descended from heaven and came and rolled away the stone and sat upon it. 3 And his appearance was like lightning, and his clothing as white as snow. 4 The guards shook for fear of him and became like dead men. 5 The angel said to the women, “Do not be afraid; for I know that you are looking for Jesus who has been crucified. 6 “He is not here, for He has risen, just as He said. Come, see the place where He was lying. 7 “Go quickly and tell His disciples that He has risen from the dead; and behold, He is going ahead of you into Galilee, there you will see Him; behold, I have told you.” 8 And they left the tomb quickly with fear and great joy and ran to report it to His disciples. 9 And behold, Jesus met them and greeted them. And they came up and took hold of His feet and worshiped Him. 10 Then Jesus said to them, “Do not be afraid; go and take word to My brethren to leave for Galilee, and there they will see Me.”

I had mentioned that last week the boys from the church camped out in my yard and we talked about Holy Week around the campfire, sharing what we could all remember about the story and putting the pieces together.  When we got to talking about Resurrection Sunday, something occurred to me.  We celebrate Good Friday more than we celebrate Resurrection Sunday!  The boys recounted the events of the Marys finding the tomb, talking with the angels, and then running to tell the disciples.  “But what is so important about all of it?” I asked the boys.  The response was a majority of blank stares.  We were able to easily discuss the importance, going all the way back to original sin and Adam and Eve, of Jesus’ death on the cross but how often do we reflect upon the significance of the resurrection?  “Without Jesus being resurrected, He’s just another dead prophet,” someone said.  We all nodded our heads in agreement, but we still didn’t capture the fullness of what Jesus’ resurrection means for us!  This, my friends, is the great depression of our time.

Over the past two days we talked about the significance of Jesus’ death on the cross and His trip to speak with the dead while His body lay in the tomb.  To recap, His death broke the power of sin over our lives and gives us the ability to reunite with God the Father as we were originally created to live.  Between His final breath on Friday afternoon and this morning when He walked out of the tomb a new man, He visited what we have come to learn as the holding place for souls until the final judgment and claimed victory over spiritual death by preaching the Gospel to those who hadn’t heard it before and reclaimed the authority that we had surrendered to Satan so that we could once again obtain it. 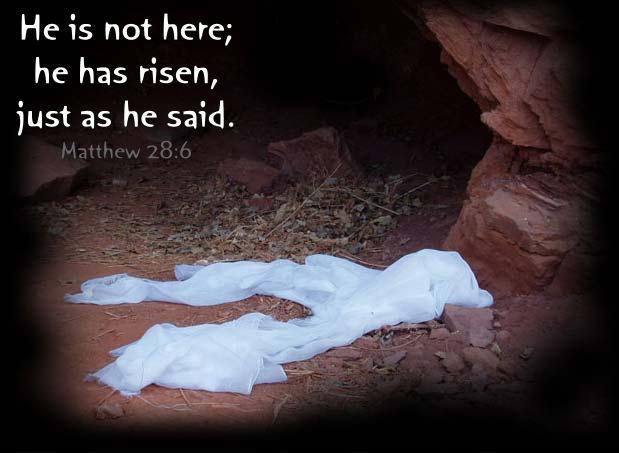 When we are baptized as an obedient act proclaiming to Christ and the rest of the world that we are committing to following Him, we recognize the symbolism of identifying ourselves with Jesus in the tomb.  The Apostle Paul explains this clearly in Romans 6:

1 What shall we say then? Are we to continue in sin so that grace may increase? 2 May it never be! How shall we who died to sin still live in it? 3 Or do you not know that all of us who have been baptized into Christ Jesus have been baptized into His death? 4 Therefore we have been buried with Him through baptism into death, so that as Christ was raised from the dead through the glory of the Father, so we too might walk in newness of life. 5 For if we have become united with Him in the likeness of His death, certainly we shall also be in the likeness of His resurrection, 6 knowing this, that our old self was crucified with Him, in order that our body of sin might be done away with, so that we would no longer be slaves to sin; 7 for he who has died is freed from sin. 8 Now if we have died with Christ, we believe that we shall also live with Him, 9 knowing that Christ, having been raised from the dead, is never to die again; death no longer is master over Him. 10 For the death that He died, He died to sin once for all; but the life that He lives, He lives to God. 11 Even so consider yourselves to be dead to sin, but alive to God in Christ Jesus. 12 Therefore do not let sin reign in your mortal body so that you obey its lusts, 13 and do not go on presenting the members of your body to sin as instruments of unrighteousness; but present yourselves to God as those alive from the dead, and your members as instruments of righteousness to God. 14 For sin shall not be master over you, for you are not under law but under grace.

So then, in Jesus’ resurrection we too have been resurrected.  In John 20, we see the details of an exchange between the resurrected Jesus and Mary Magdelene that reveals that He too was a new creation:

17 Jesus said to her, “Stop clinging to Me, for I have not yet ascended to the Father; but go to My brethren and say to them, ‘I ascend to My Father and your Father, and My God and your God.’ “

Jesus, while still a man, was a resurrected man living more in the fullness of God as a result of His death, burial and resurrection.  We too, when we identify with Christ through baptism, are new men and women.  This isn’t to say that nobody can hug us (as what Jesus said to Mary), but that we are no longer the old self.  Jesus spoke of this many times to His disciples that a new person cannot behave the old ways (remember the comparison of putting new wine in an old wineskin?).  When Jesus told His disciples (and subsequently us) to follow Him, it didn’t stop at His death.  This is why Jesus spoke to His disciples as recorded in John 16 (which is right before the Last Supper):

Jesus was telling them before His death that they were still to follow Him.  Although they did not understand everything He was saying, since we know some had still yet to accept that He would be killed, they would understand as the events came to pass.  We know that going forward from the resurrection Jesus spent more time with them and they were more intentional in listening to what He had to say.  They then remained obedient and waited in Jerusalem until Jesus sent this Helper, which they didn’t really know what would happen until it did on the day of Pentecost.  But we no longer have to wait!  We have a new mission and a new purpose in life.  Consider what Paul wrote in 1 Corinthians 5:

14 For the love of Christ controls us, having concluded this, that one died for all, therefore all died; 15 and He died for all, so that they who live might no longer live for themselves, but for Him who died and rose again on their behalf. 16 Therefore from now on we recognize no one according to the flesh; even though we have known Christ according to the flesh, yet now we know Him in this way no longer. 17 Therefore if anyone is in Christ, he is a new creature; the old things passed away; behold, new things have come. 18 Now all these things are from God, who reconciled us to Himself through Christ and gave us the ministry of reconciliation, 19 namely, that God was in Christ reconciling the world to Himself, not counting their trespasses against them, and He has committed to us the word of reconciliation. 20 Therefore, we are ambassadors for Christ, as though God were making an appeal through us; we beg you on behalf of Christ, be reconciled to God. 21 He made Him who knew no sin to be sin on our behalf, so that we might become the righteousness of God in Him.

We spend too much time focusing on Jesus’ death and not enough time on His new life.  It’s definitely not to say that His death isn’t important, but it is not the end of the story, it’s the beginning!  It’s the beginning of all things new!  It’s the beginning of recognizing who we are in Him!  It’s the beginning of this new life He has granted us!  Jesus spent His life on earth preaching about the good news of our potential to walk and live in the Kingdom of God.  He then spent 40 days after His resurrection revealing to His closest followers that through His resurrection we too can be made new.  We now possess power over sin.  We now have the authority over this world.  We now are new creatures walking in the presence of God.  But we don’t live that way, do we?  We still live as though we are sitting at the foot of the cross mourning His death and asking Him to forgive us of our sins instead of walking in that forgiveness and wielding the power and authority He originally created us to live with.

This new way of living is a daily process of sacrifice, surrender, and humility, but if we are not learning how to live more in the Kingdom every day, then we are simply wasting the opportunity Jesus gave us to live closer to Him!  We are taking for granted all that He did on the cross because we are not living as new creations.  Today the Christian world dresses in their Sunday best, walks around saying “He is risen,” and has a big family event full of Easter egg hunts, ham dinners, and the morning message.  Today is the day where churches see the highest attendance count of the whole year.  But when we walk out of those church doors, we go back to focusing on Jesus’ death instead of His new life.  Let us celebrate this new life together and live the life He fought to win back for us.  The death is over.  The victory is won.  Do you believe it? Live your new life in the Kingdom.

If you want to learn more about how to live this new life He has given us, download a copy of my latest book At The Feet of Jesus today!  Today it is free! Click the image below for more info. 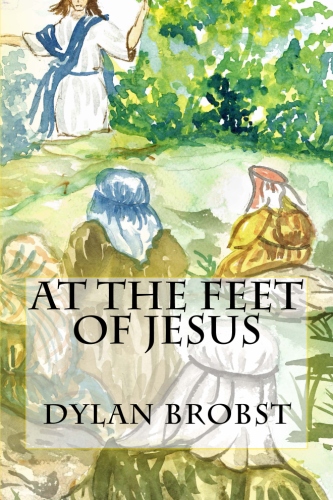