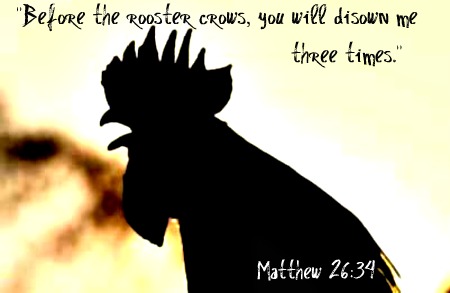 Matthew 26:69-75
69 Now Peter was sitting outside in the courtyard, and a servant-girl came to him and said, “You too were with Jesus the Galilean.” 70 But he denied it before them all, saying, “I do not know what you are talking about.” 71 When he had gone out to the gateway, another servant-girl saw him and said to those who were there, “This man was with Jesus of Nazareth.” 72 And again he denied it with an oath, “I do not know the man.” 73 A little later the bystanders came up and said to Peter, “Surely you too are one of them; for even the way you talk gives you away.” 74 Then he began to curse and swear, “I do not know the man!” And immediately a rooster crowed. 75 And Peter remembered the word which Jesus had said, “Before a rooster crows, you will deny Me three times.” And he went out and wept bitterly.

Here is a video depiction of this part of the story.  I apologize in advance for the King James version of the script.

Peter is terribly humbled in this.  He realizes his own frailty as a human despite his zeal for Jesus.  Everything Jesus had been warning him about now is coming to pass and Peter’s pride has come crumbling down.  This is exactly what he needed.  If he wasn’t listening to Jesus before, he is sure listening to him now.  We can see a similarity between Peter and Judas in this point.  Both have betrayed Jesus even though they both said they wouldn’t.  Just as we read the Satan had taken hold of Judas’ heart, in these moments of fear and dishonesty Satan had a grip on Peter’s heart as well.  The difference in the two is that we see Peter’s repentance as the story unfolds and in Judas there is just guilt and remorse.

The question isn’t so much “do we deny Jesus” but “what do we do about it?”  Do we recognize that without an increasing relationship with God we cannot withstand the societal pressures around us?  As we can see in the video, we are so easily caught up in our self preservation that we don’t recognize our own sinfulness until the act is already committed.  Our lack of faith in God’s provision and protection is a result of fear.  Maybe from persecution, maybe from failure, or many other fears we have that we let control us.  Regardless of the fear we must recognize it reveals our lack of faith about something.  Peter struggled with trusting Jesus’ words because of his pride and when the time came to trust in them, he responded in fear.

In our daily interactions with the world around us, we respond out of faith or fear.  The magnitude of that faith or fear is directly proportional to our connection with God.  The closer we are to God the less we will fear.  The more we think we can do it on our own the more we will struggle in fear to keep from losing our own control on things.  This is why the Kingdom of God operates by giving power through submission.  If we surrender that which we think we have control over to God’s authority and power, we do not have to be concerned with losing it!  As we saw in the garden, Peter thought his could fight off a whole army with a sword.  This was a result of not trusting God’s providence and not believing Jesus’ words.

Instead of being afraid of losing it and denying Jesus, let us recognize Him and surrender to His will so we no longer have to fear and will not run the risk of denying Him any more.