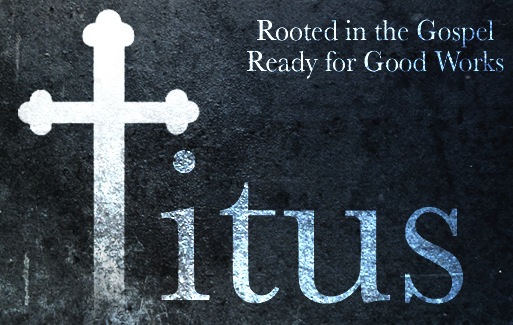 1 Paul, a bond-servant of God and an apostle of Jesus Christ, for the faith of those chosen of God and the knowledge of the truth which is according to godliness, 2 in the hope of eternal life, which God, who cannot lie, promised long ages ago, 3 but at the proper time manifested, even His word, in the proclamation with which I was entrusted according to the commandment of God our Savior, 4 To Titus, my true child in a common faith: Grace and peace from God the Father and Christ Jesus our Savior.

Paul’s opening here is quite heavy with theology, don’t you think?  Before we get into that, though, let’s look at who Titus is and why Paul wrote this letter.  Titus was a convert to Christianity under the work of Paul.  He became one of Paul’s disciples and was used in various things such as carrying letters to other churches (Corinth) until he was finally ready to lead.  Paul had him stay in Crete and work there as his “home base” to help the churches grow there.  This letter was written to Titus in between his letters to Timothy.  It was meant to encourage and instruct (as Paul’s letters usually do) Titus so that he remains steadfast in his work and position.  We might see some repeats of what Paul said in his letters to Timothy since Titus is also working with a church and dealing with similar problems.

The first verse opens a whole can of worms about predestination, pre-election, fate, and God’s chosen people.  I believe I’ve spoken much in the past about the theories of predestination, so I’m not going to expound upon that much.  I only intend to say that my belief in it is that any who choose Christ are predestined to know more of the truth, experience godliness, and trust in the hope of eternal life.  That means everyone has an opportunity to experience it.  Our feeble minds too often translate this into God only choosing some, yet it isn’t in accordance with the verse that reminds us that God sacrificed Himself for everyone, not just some.

This is something that God promised throughout the ages.  It is recorded in the Old Testament, how God would save His people (not just Israel) from themselves and into relationship with Him.  This is the promise to which Paul is referring.  His assertion that God cannot lie seems a bit bold, but let’s think about it.  God cannot lie.  If He did, it would mean He would have made a mistake or wouldn’t be all knowing.  If that’s the case, then He really isn’t God, He is like us: fallible.  The assertion that God cannot lie is not as ridiculous as one might think, but rather is indicative of not only who God is, but what God should be.

I like how Paul names God as our Savior, not Jesus.  Granted, if you believe in the Triune God, you surely believe in this.  However, we must recognize that this is but one example of the many within scripture that reveals Jesus as God.  He did the work to save us: Jesus, God, and the Holy Spirit.  They/ He saved us.  This is why Paul calls God our Savior here, because they are three in the same.  He then calls God the Father and Jesus the Savior in verse 4.

Next we see Paul reveal his purpose, as he usually does to make clear that his work is of God, not of himself.  Actually, what Paul is revealing here is everyone’s purpose who accepts the salvation of Christ.  We are not just saved from something, but to something: the work of proclaiming the Word of God which has been written upon our hearts.

How do we handle our purpose?  Do we accept it and carry it out as Paul and Titus did?  Maybe we get stifled by the whole predestination topic and don’t even get to realize our purpose because we decide to argue about something that distracts us from the point.  Have you asked God recently what you have been predestined for?  Why does He continue to let you breathe?