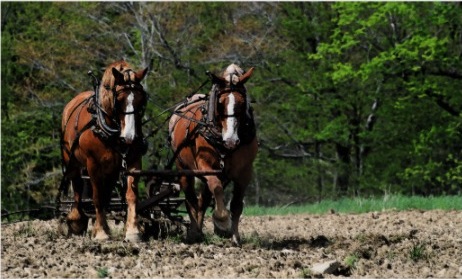 Amos 6:10-14
10 Then one’s uncle, or his undertaker, will lift him up to carry out his bones from the house, and he will say to the one who is in the innermost part of the house, “Is anyone else with you?” And that one will say, “No one.” Then he will answer, “Keep quiet. For the name of the LORD is not to be mentioned.” 11 For behold, the LORD is going to command that the great house be smashed to pieces and the small house to fragments. 12 Do horses run on rocks? Or does one plow them with oxen? Yet you have turned justice into poison And the fruit of righteousness into wormwood, 13 You who rejoice in Lodebar, And say, “Have we not by our own strength taken Karnaim for ourselves?” 14 “For behold, I am going to raise up a nation against you, O house of Israel,” declares the LORD God of hosts, “And they will afflict you from the entrance of Hamath To the brook of the Arabah.”

Today’s passage is a continuation of yesterday’s that I could very well have kept together, but there is an important part of this passage that needs to be highlighted.  If you’ve been following my blog for very long, what I’m about to say isn’t new to you, but here it is in the bible plainly to understand.  God has designed us for a purpose.  Once we finally humble ourselves and receive His sanctification (being set apart), He has specific plans for our lives.  God is speaking through Amos to Israel that they have been misusing themselves.

On a grand level, we were created to worship God.  One manner of doing this is to have a close relationship with Him and be in harmony with Him and His will.  When we don’t live this way, we are like a horse running up a cliff of rocks or even worse, a farmer trying to plow it.  Our justice becomes poison and what used to be righteousness is now wormwood (a plant that while it now is used for medicinal purposes, at the time was a poisonous plant that causes seizures).  God’s judgment and discipline is going to be a time that Israel will never forget, like the whipping of a child’s lifetime.

In verse 10, there is this weird little analogy about someone coming to collect the dead.  The point is that the remnant of Israel will be so ashamed and afraid of their actions and God’s reaction that they will even fear to say the name of the Lord.  Out of respect for acknowledging whom He is and fear for invoking more judgment from Him.  The word Jehovah, which the Jews use to name God, is a word that they rarely said out loud because of their reverence for God.  It seems that at this point in time, they had lost respect and reverence for Him and God’s punishment will come down and restore that.  He will realign them back to their attitude of reverence, respect, and honor of God.  They have become prideful of their own strength, forgetting that it was God Himself who makes them victorious and has set them apart from the world and He is about to remind them of the difference between His strength and their own.

The warning at the end of this passage reveals how God will strike Israel: with a warring nation.  The judgment will come as a revelation to them that they cannot do it on their own as they think.  Their prideful stature has put them in a place to think they are invincible but they have forgotten how they got there.  God will send an army against them that will destroy them from the north to the south (the border areas that Amos named).