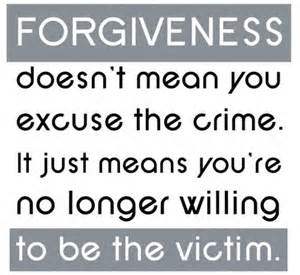 As Paul continues explaining the purpose of the Body of Christ, the truth of God, and how we are called to behave as believers in Christ in one Spirit, he explains to the Corinthians the importance of forgiveness.

2 But I determined this for my own sake, that I would not come to you in sorrow again. 2 For if I cause you sorrow, who then makes me glad but the one whom I made sorrowful? 3 This is the very thing I wrote you, so that when I came, I would not have sorrow from those who ought to make me rejoice; having confidence in you all that my joy would be the joy of you all. 4 For out of much affliction and anguish of heart I wrote to you with many tears; not so that you would be made sorrowful, but that you might know the love which I have especially for you. 5 But if any has caused sorrow, he has caused sorrow not to me, but in some degree—in order not to say too much—to all of you. 6 Sufficient for such a one is this punishment which was inflicted by the majority, 7 so that on the contrary you should rather forgive and comfort him, otherwise such a one might be overwhelmed by excessive sorrow. 8 Wherefore I urge you to reaffirm your love for him. 9 For to this end also I wrote, so that I might put you to the test, whether you are obedient in all things. 10 But one whom you forgive anything, I forgive also; for indeed what I have forgiven, if I have forgiven anything, I did it for your sakes in the presence of Christ, 11 so that no advantage would be taken of us by Satan, for we are not ignorant of his schemes.

This is where we learn about the “lost letter” of Paul to the Corinthians.  On a historical note, we draw information about his hurried trip to Corinth to help them get straightened out since they were not heeding his words to correct their ways of worldliness.  His sorrow, as we read, is not necessarily that they weren’t being obedient to him, but rather that they weren’t being obedient to God.  Obedience to God’s Word is crucial, however it is just as much important to understand why it is crucial.  In today’s society of people trying to gain and maintain power, it is easy for us to think that God is trying to gain control over us.  Seriously?  This couldn’t be further from the truth.  God is God.  If He can speak the world into existence, breath life into our bodies, and destroy everything with the blink of an eye, why would He have trouble “controlling” us?  The point of obedience is that He knows what is best for us and when we are obedient, we get to experience the fullness of life.  The Corinthians were missing this (and so are the majority of us) and it was this that caused Paul sorrow.  But, what did he do about it?

Aside from the emergency trip to help them, he made sure that his sorrow did not dictate or control his own heart.  Is anybody out there today overwhelmed with sorrow, despair, and hopelessness?  It’s easy to let our emotions control us, isn’t it?  This is one battle I believe I will continually have until the return of Christ.  For one, Paul highlighted that since we are all united in the one Spirit of God, if one suffers, all suffer.  This is because if God is sorrowful about the actions of even one person and since we share the same spirit, we do too; if we don’t we are missing something.  But this sorrow is not to cause angst or separation against one another.  Rather, the Holy Sorrow of God moves us with compassion to help one another in our times of need.  Sometimes the thing people need the most is forgiveness.  After all, isn’t forgiveness the saving grace of God?  It’s what was accomplished when Christ was nailed to the cross.

Forgiveness is a difficult topic because it challenges the general concept of vengeance.  We want our pound of flesh and to exact justice upon those who have wronged us, don’t we?  Forgiveness is the exact opposite.  Unfortunately, one of the biggest stumbling blocks is that we have been trained to believe that giving forgiveness to others is a way of saying that what was done to us is ok and acceptable.  On the contrary, forgiveness is saying that we refuse to let what others have done to us affect us anymore.  Maybe the initial infliction (physical, emotional, or even spiritual) hurt us in some way; but unforgiveness ferments the initial damage and makes it worse like a cancer that keeps growing.  Forgiving another for what they have done to you is like removing a tumor before it can grow and spread.  If anything, we should be certain to forgive others so that no advantage would be taken of us by Satan, for we are not ignorant of his schemes.  Sometimes it is impossible for us to forgive under our own power.  Yet, when we recognize the bitterness of unforgiveness in our hearts, we can call on the One who forgives everything and all for His strength to change our hearts into one of forgiveness.

Will you be obedient to rise above unforgiveness so as not to give a foothold to our spiritual enemy?