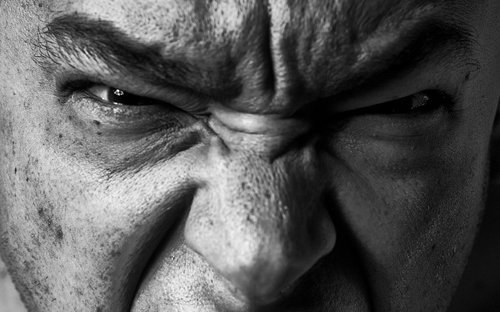 As Jesus begins His journey through the Law explaining how we are to be more righteous than the scribes and Pharisees, He begins with murder and anger. I think He starts with this for two reasons. 1) Whenever we try to defend our own righteousness, we tend to say stuff like, “well, I never killed anybody.” 2) We all get angry and frustrated at others. Some would say anger and frustration is just part of being a human interacting with other humans. People get on our nerves and whether we express it or not, we get frustrated.

That being said, doesn’t it seem a bit ridiculous that Jesus would condemn us to hellfire for getting frustrated with someone? I mean, come on man, even You flipped tables in the market! (This is how our pride and humanity respond to this passage.) The truth is that our unrighteous anger condemns us. It isn’t Jesus that sends us to hell; it is our emotional anger that carries us there. Our problem in these situations is that our emotions get away from us; we say, do, and think things that aren’t true and we shouldn’t, and it gives birth to sinfulness. Interestingly, the very courts that Jesus was talking about were the religious courts. He was referring to the Sanhedrim who by Jewish Law would condemn Jews that violated it. Jesus is telling His listeners that they are guilty according to the Law and would be condemned by the very people that they were angry with! That’s gotta be frustrating to someone. The Greek word used here to annotate anger is orgizo which is an emotional anger. This is the same word we read about in James 1:

19 This you know, my beloved brethren. But everyone must be quick to hear, slow to speak and slow to anger; 20 for the anger of man does not achieve the righteousness of God. 21 Therefore, putting aside all filthiness and all that remains of wickedness, in humility receive the word implanted, which is able to save your souls. 22 But prove yourselves doers of the word, and not merely hearers who delude themselves.

We also read the Apostle Paul’s words in Ephesians 4 discussing what it means to be born again and how we should handle our anger:

25 Therefore, laying aside falsehood, SPEAK TRUTH EACH ONE of you WITH HIS NEIGHBOR, for we are members of one another. 26 BE ANGRY, AND yet DO NOT SIN; do not let the sun go down on your anger, 27 and do not give the devil an opportunity.

Both of these passages reveal to us that we will be provoked to anger, but that it is a dangerous trap the devil uses to control us and cause us to sin. I personally struggle with this issue and can say it is amazing how quickly anger can drive us to do things we know we shouldn’t just as much as alcohol or drugs can. Anger is a powerful drug in itself, so we must guard ourselves against it. When we embrace anger, we give control to our spiritual enemy.

I mentioned righteous anger before and it has become my way of gauging my own feelings about something. When we begin to feel the heat rising within us and our frustration begins to burn, we need to think, “why do I feel this way and what is it motivating me to do?” An example would be finding out about someone getting raped. It’s a sensitive and serious subject, but what do you feel when you think about it? Do you want to go on a rampage and hunt down all rapists and castrate and kill them? Or, are you motivated to work on a community program to help victims and protect future victims in a nonviolent way? Remember that God said we are to leave the revenge part for Him and we are to love and protect those who cannot do so for themselves. The former is humanistic/emotional anger and the latter is righteous anger. Righteous anger motivates us to create a solution in love whereas emotional anger causes damage and pain. Righteous anger allows us to be angry and not sin while emotional anger condemns us to burn in a fiery pit. Righteous anger provides a solution that hurts nobody; emotional anger always hurts somebody.

We might not like this. We might raise a few “buts” against this, but if we put aside all filthiness and wickedness as James suggests, what we are left with is a true solution. If we put all these things aside and nothing remains, then we know our anger was purely emotional based on our character and feelings and nothing based upon the will of God. The Holy Spirit can and will guide us through this process as long as we turn to Him whenever you start to feel that anger rising inside you.