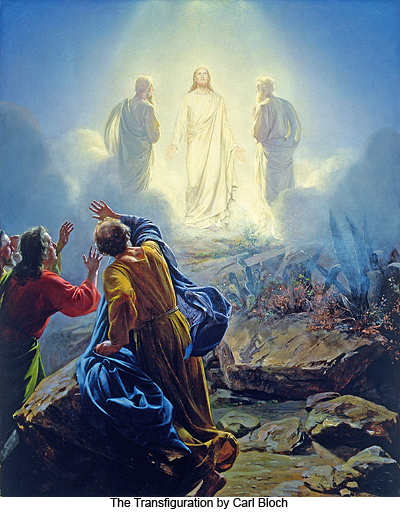 Matthew 17:1-13
1 Six days later Jesus took with Him Peter and James and John his brother, and led them up on a high mountain by themselves. 2 And He was transfigured before them; and His face shone like the sun, and His garments became as white as light. 3 And behold, Moses and Elijah appeared to them, talking with Him. 4 Peter said to Jesus, “Lord, it is good for us to be here; if You wish, I will make three tabernacles here, one for You, and one for Moses, and one for Elijah.” 5 While he was still speaking, a bright cloud overshadowed them, and behold, a voice out of the cloud said, “This is My beloved Son, with whom I am well-pleased; listen to Him!” 6 When the disciples heard this, they fell face down to the ground and were terrified. 7 And Jesus came to them and touched them and said, “Get up, and do not be afraid.” 8 And lifting up their eyes, they saw no one except Jesus Himself alone. 9 As they were coming down from the mountain, Jesus commanded them, saying, “Tell the vision to no one until the Son of Man has risen from the dead.” 10 And His disciples asked Him, “Why then do the scribes say that Elijah must come first?” 11 And He answered and said, “Elijah is coming and will restore all things; 12 but I say to you that Elijah already came, and they did not recognize him, but did to him whatever they wished. So also the Son of Man is going to suffer at their hands.” 13 Then the disciples understood that He had spoken to them about John the Baptist.

I’ve always wondered what the point of this transfiguration was.  It seems a bit out of place and unimportant, really.  Today in reading it however, I see there are two main things to draw from this event.

Jesus is God’s trump card.  Throughout the entire bible until now, God placed various prophets, fathers of the faith, and founders of the nation in Israel’s past to look up to and respect.  Abraham, Isaac, Moses, Isaiah, Elijah, and even John the Baptist are all prominent figures in the history of the Jews.  They looked up to them.  They respected their words.  They turned what they said into law.  They worshipped these men.  Yes they did and said very important things that led to the formation of God’s chosen nation but they do not deserve worship, they are just men.  God used this time to reveal to Jesus’ closest friends that Jesus must be revered above all.

Jesus was seen in His full glory.  When Peter, James, and John saw Jesus “transformed” into a face of fire and robes of white, He wasn’t really transformed.  It was a glimpse of Jesus without His shroud of humanity.  Not only did God the Father tell them that Jesus is the only one who should be worshipped, but He also showed them why.  God revealed Jesus in full form.  This is why Jesus said not to reveal this until after He resurrected because then they would begin worshipping Him as a man, not as the Savior.

We have already discussed John’s fulfillment of the Elijah prophecy and just like Jesus, even though they were looking for it they did not see it because their expectations were skewed.  Jesus again mentions to His disciples that He is going to be killed by them.  I think we all struggle to see Jesus for who He truly is.  We don’t all have the opportunity to go up on a mountain to see Him transfigured.  We do, however, have the opportunity to look back at His impact upon the world and worship Him for it.  The Jews were used to doing that with their prophets and leaders and finally someone came along that we should worship and revere like that but we don’t.  Why not?  What gets in our way of recognizing Jesus fully for who He is?