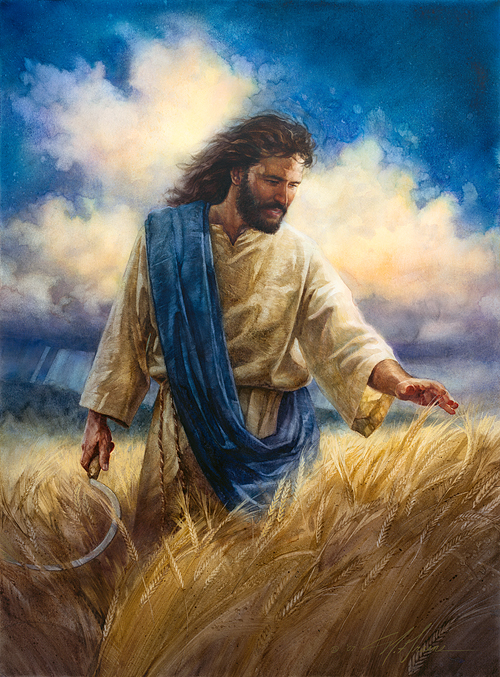 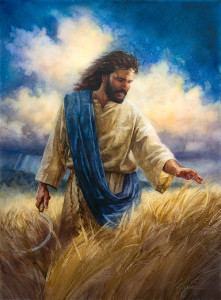 Mark 4:26-34
26 And He was saying, “The kingdom of God is like a man who casts seed upon the soil; 27 and he goes to bed at night and gets up by day, and the seed sprouts and grows -how, he himself does not know. 28 “The soil produces crops by itself; first the blade, then the head, then the mature grain in the head. 29 “But when the crop permits, he immediately puts in the sickle, because the harvest has come.” 30 And He said, “How shall we picture the kingdom of God, or by what parable shall we present it? 31 “It is like a mustard seed, which, when sown upon the soil, though it is smaller than all the seeds that are upon the soil, 32 yet when it is sown, it grows up and becomes larger than all the garden plants and forms large branches; so that THE BIRDS OF THE AIR can NEST UNDER ITS SHADE.” 33 With many such parables He was speaking the word to them, so far as they were able to hear it; 34 and He did not speak to them without a parable; but He was explaining everything privately to His own disciples.

Throughout the Old Testament, there are a few visions given of a tree growing big and revealing the majesty and wonder of God and how He cares for His creation.  We have two parables here related to sowing seeds and the resulting harvest as a result.  Generally, we separate these into two different lessons but Jesus ran these back to back because they are related in how the Kingdom of God works.

The first parable reveals God’s work.  The seed planted is God’s Word, The Gospel.  The seed is planted by man, which is the conclusion that the Apostle Paul reaches in Romans 10.  Yet God is the one who grows the seed within the soil.  So often we get caught up in our own skills of trying to strategize the best way to relay the Gospel to people that we forget that the belief and growth of faith isn’t up to us, that’s God job.  He calls us to do our part and plant the seeds and He will water and nourish the seed to grow to its full potential.  Yes, a farmer can tend to the crops and make sure it is getting enough water, sun, etc. but ultimately the growth happens as a result of God’s intervention, not our own.

At the end of this parable in verse 29 we encounter an interesting addition that we are not only called to plant the seeds, but harvest the crops!  What exactly does this mean?  In Matthew 9, we see Jesus using this metaphor in caring for the people:

[quote]35 Jesus was going through all the cities and villages, teaching in their synagogues and proclaiming the gospel of the kingdom, and healing every kind of disease and every kind of sickness. 36 Seeing the people, He felt compassion for them, because they were distressed and dispirited like sheep without a shepherd. 37 Then He said to His disciples, “The harvest is plentiful, but the workers are few. 38 “Therefore beseech the Lord of the harvest to send out workers into His harvest.”[/quote]

Generally, we look at harvesting as a dying process (certainly, so is our conversion, but this is a different lesson altogether).  We view the harvest as a bad thing; maybe that is because of too many sci-fi films.  The Kingdom of God, however, is opposite this world and the harvest in this sense is the new beginning.  In regards to faith and belief in God, the seed is the beginning of the process; the harvest is the end that begins one’s relationship with God through Jesus Christ.  Some crops take longer to be ready for harvest while others do not.  There always needs to be someone ready, however, to harvest the crop when the crop permits.  When the crop is ready, it must be harvested or else it will whither and die.  This should put some urgency on our evangelism and discipleship of others.  Jesus told us in Matthew 28:

[quote]18 And Jesus came up and spoke to them, saying, “All authority has been given to Me in heaven and on earth. 19 “Go therefore and make disciples of all the nations, baptizing them in the name of the Father and the Son and the Holy Spirit, 20 teaching them to observe all that I commanded you; and lo, I am with you always, even to the end of the age.”[/quote]

Discipleship happens after the harvest.  The harvest, even in the same motion as swinging a sickle, is when we swing our arm and wrap it around someone, bringing them close to us and guiding them through the Kingdom principles of their new life they have been given to live!  The second parable of the mustard seed growing into a tree that provides for the birds of the air relates to this discipleship.

The most popular metaphor of the mustard seed is when Jesus talks about having a mustard seed of faith and being able to move mountains.  I don’t think there is a change of meaning here, just a different image.  When we are “harvested” and come to full faith in Christ as our Savior from the bondage of sin and into a relationship with God, we are babies.  We are drinking the proverbial milk that Paul talked about with his disciples.  Our faith is tiny because we are just beginning to take those steps forward of trusting God for what He says and trying to see what happens.

1 thought on “The Kingdom Harvest”