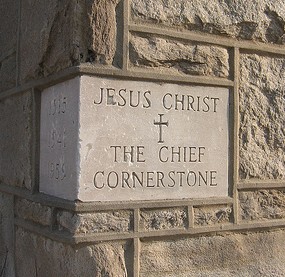 4 And coming to Him as to a living stone which has been rejected by men, but is choice and precious in the sight of God, 5 you also, as living stones, are being built up as a spiritual house for a holy priesthood, to offer up spiritual sacrifices acceptable to God through Jesus Christ. 6 For this is contained in Scripture:

“Behold, I lay in Zion a choice stone, a precious corner stone,
And he who believes in Him will not be disappointed.”

7 This precious value, then, is for you who believe; but for those who disbelieve,

“The stone which the builders rejected,
This became the very corner stone,”

“A stone of stumbling and a rock of offense”;

for they stumble because they are disobedient to the word, and to this doom they were also appointed.

Peter just finished encouraging us to feed on God’s Word like babies, so that we may grow spiritually.  Here, he is laying out the importance of it.  Our spiritual growth isn’t jus a suggestion or a “good idea” if it suits us, rather it is a necessity because of what God has planned for us.  The part the Peter quotes here is from two passages in Isaiah and one in Psalms.  They refer to Jesus as the Rock or the corner stone by which the house of God is supported and relies.  As believers in this corner stone, we then become similar in that we too become rocks or stones that are used to build God’s church or God’s family (ie. The body of Christ) but we are only a solid building 1) if we hold together and 2) if we continually rely upon the corner stone.  A brick or stone in a house that does not lean upon the corner stone not only defies the rest of the building but also causes it to fall apart.

I find it interesting that Peter uses here the analogy of a stone, that Jesus is the living stone and because of His being a living stone, we too get to be.  What does that say about us without Jesus?  That we are like stones or rocks: without real life.  Did you notice verse 7, where it says that the value of Christ is for those who believe?  This relates to what I have said in the past about predestination.  It’s not about God choosing who believes and who doesn’t, rather that those who believe are predestined to receive the gifts of God.  In other words, whoever believes in Him are so chosen to receive, not that we are predestined to believe.  This is the message of the infamous John 3:16: that whoever believe in Him will receive the gifts of God.  Part of this gift is being built up as part of a spiritual house designed for a holy priesthood.

Have you rejected the cornerstone or are you leaning on it?