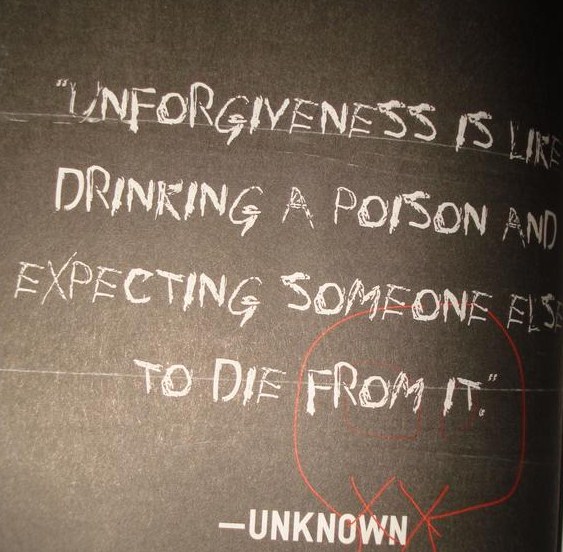 Philemon 18-21
18 But if he has wronged you in any way or owes you anything, charge that to my account; 19 I, Paul, am writing this with my own hand, I will repay it (not to mention to you that you owe to me even your own self as well). 20 Yes, brother, let me benefit from you in the Lord; refresh my heart in Christ. 21 Having confidence in your obedience, I write to you, since I know that you will do even more than what I say.

I know Paul is the one writing this letter, but if you reread this passage, doesn’t it seem like something Jesus would write?  My next question is: would we ever do this for someone else?  We can understand the petition for forgiveness and even Paul’s attempt at making everything right by sending Onesimus back to Philemon, but to repay the debt?  That’s just crazy, isn’t it?  This of course is with the notion that Paul being able to pay Philemon back would refresh him.  Would it refresh you to pay off someone else’s debt?

This letter of forgiveness has been taken to a whole new level.  In Matthew 18, Jesus has a conversation with Peter about forgiveness that seems directly linked to Paul’s letter to Philemon:

The refreshing of Paul’s heart would come from knowing that Philemon has fully forgiven Onesimus.  By taking him back and accepting the payment for his debt, Philemon would be acting with obedience to the principle Jesus taught about forgiveness.  It isn’t really about doing what Paul thinks he should do, it is about being obedient to Christ and living in the freedom of forgiveness that He offers us.  Paul is merely giving Philemon an opportunity to forgive with the expectation he will do so.

In verse 19, Paul reminds Philemon of a similar situation between the two of them.  Paul had forgiven Philemon of something that otherwise he did not have to.  Paul is hoping that Philemon does not act like the unmerciful slave Jesus talked about.  If anything, we should forgive others because God has forgiven us.  As a caveat to the Lord’s prayer, Jesus clarified the forgiveness part by saying,

This might seem a bit cruel, but the truth is that both receiving and giving forgiveness work hand-in-hand.  If we ignore this point, we might miss it.  At first thought, we might believe that everyone wants to receive forgiveness.  Yet if we look deeper, we can see that pride, self-hatred, and even the condemnation by the world around us can harden our hearts enough to refuse the forgiveness offered to us from others!  Our main thought would be, “I don’t deserve to be forgiven.”  No, receiving forgiveness isn’t about if you deserve it or not.  It’s about recognizing the love, grace, and mercy of others towards you.  We have been cultured in a world where nothing is for free and we would rather live with guilt, shame, and regret than receive free forgiveness (because if the forgiveness isn’t free, it really isn’t forgiveness).

We have been poisoned with the notion that everything and everyone must “pay”.  We have been conditioned by society to keep to our own, hate everyone else, expect nothing good from anyone, and trust nobody.  When we are presented with Jesus’ message of eternal forgiveness, mercy, and love, we don’t know what to do with it because we think somehow it’s a trick.  We’d rather sell our soul to the devil now and enjoy it while we can instead of try to understand what it means to live in the Kingdom of God.

How can you better embrace and give forgiveness today?