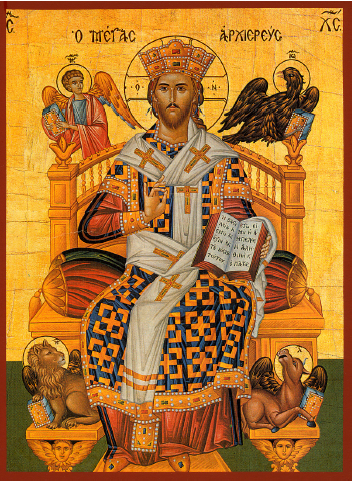 As a transition from the topic of grace, the author begins describing Jesus’ authority in a way his Jewish audience would understand.  The relationship is that Jesus becoming the ultimate priest was a sign of God’s grace for us all.

For every high priest taken from among men is appointed on behalf of men in things pertaining to God, in order to offer both gifts and sacrifices for sins; 2 he can deal gently with the ignorant and misguided, since he himself also is beset with weakness; 3 and because of it he is obligated to offer sacrifices for sins, as for the people, so also for himself. 4 And no one takes the honor to himself, but receives it when he is called by God, even as Aaron was.

5 So also Christ did not glorify Himself so as to become a high priest, but He who said to Him,

Today I have begotten You”;

6 just as He says also in another passage,

“You are a priest forever

According to the order of Melchizedek.”

7 In the days of His flesh, He offered up both prayers and supplications with loud crying and tears to the One able to save Him from death, and He was heard because of His piety. 8 Although He was a Son, He learned obedience from the things which He suffered. 9 And having been made perfect, He became to all those who obey Him the source of eternal salvation, 10 being designated by God as a high priest according to the order of Melchizedek.

Melchizedek has always been a bit of a mystery to me.  There isn’t a whole lot told about him in the bible except that he was a priest of God Most High who appears in Genesis to bless Abram and secure God’s covenant with him.  He is the first evidence of priests in the bible (before Israel was formed and priests were appointed through the Levitical order).  The reason why the author brings up Melchizedek is to prove his point that even high priests are appointed by God and for God’s purposes.  Jesus too was appointed by God as the Ultimate Priest to be the ultimate pathway to God.  Priests are put in place to be a way of communication between God and humans; appointed by God for God’s uses.  Jesus, the Ultimate Priest, became that for us.  Now we can go directly to God as Jesus has become the intermediary instead of having to rely on humans to do it for us.

Jesus said to His disciples when He was on earth as recorded in John 14, “I am the way, and the truth, and the life; no one comes to the Father but through Me.” This is extremely important for understanding what is now available to us because of Christ.  So often we are led to believe that God is far away and even if He does exist, “what would He want with little old me?”  Everything!  God did all that He did just so you would be able to live in His presence and have a relationship with Him.  Our sin prevents us from doing that but Jesus made it possible for us to constantly be in His presence.  In the Old Testament we see the constant sacrifice and slaughter of animals as a temporary fix and cleansing for sin.  Jesus was the ultimate sacrifice.  As Paul says in Romans, “the wages of sin is death,” and Jesus died that death so we don’t have to as payment for what we have done and will do.

Why do we live in a way contrary to this gift?  We have a direct line of communication to God.  We are no longer subject to the burden and curse of sinfulness.  We have been given the keys to the kingdom and have regained authority over this land.  Yet the enemy continues to feed us with lies, doubts, insecurities, and anything else that is holding you back.  God is listening and wants you to live life abundantly with joy and in communion with Him.  Why aren’t we?