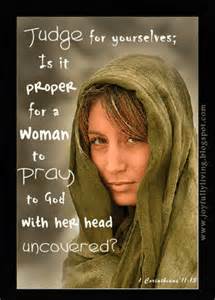 Today’s passage is one of the more controversial in the bible:

2 Now I praise you because you remember me in everything and hold firmly to the traditions, just as I delivered them to you. 3 But I want you to understand that Christ is the head of every man, and the man is the head of a woman, and God is the head of Christ. 4 Every man who has something on his head while praying or prophesying disgraces his head. 5 But every woman who has her head uncovered while praying or prophesying disgraces her head, for she is one and the same as the woman whose head is shaved. 6 For if a woman does not cover her head, let her also have her hair cut off; but if it is disgraceful for a woman to have her hair cut off or her head shaved, let her cover her head. 7 For a man ought not to have his head covered, since he is the image and glory of God; but the woman is the glory of man. 8 For man does not originate from woman, but woman from man; 9 for indeed man was not created for the woman’s sake, but woman for the man’s sake. 10 Therefore the woman ought to have a symbol of authority on her head, because of the angels.

This passage, on its own, is very dangerous.  It is dangerous because it can give (and does give) a sort of moral backing to the dominance of men over women.  The point Paul is making here is that the covering of one’s head is a symbol of submission to another.  In some religions, head coverings are worn and in others the entire body is covered.  I’m not going to say that I know all the intimate details of these practices, but I imagine in one way or another, it is meant to be a sign of submission.

What question did the Church at Corinth ask to evoke this response in Paul’s letter?  It is possible that they noticed other Christians from different areas who did not cover their heads the way those at Corinth did.  They could have attended service as transients through the city.  Maybe this was a tradition that the church started, through the instruction of Paul, in order to remain relevant to the local culture and to signify God’s order of nature.  To qualify what I am saying, my meaning is not that women are subservient to men, rather that God created men to be the leader (the head of Christ) and the covering of the head in that time was a symbol of this.  Let’s continue reading:

11 However, in the Lord, neither is woman independent of man, nor is man independent of woman. 12 For as the woman originates from the man, so also the man has his birth through the woman; and all things originate from God. 13 Judge for yourselves: is it proper for a woman to pray to God with her head uncovered? 14 Does not even nature itself teach you that if a man has long hair, it is a dishonor to him, 15 but if a woman has long hair, it is a glory to her? For her hair is given to her for a covering. 16 But if one is inclined to be contentious, we have no other practice, nor have the churches of God.

Paul clears up that even though man is created as the head of household and spiritual leader, woman is in fact not subservient to man.  Whenever there is a passage that suggests such a thing in the bible, my favorite phrase is, “what does it say next?”  We cannot fall victim to cut and paste theology!  It is these verses that lead me to believe that the head covering was not about being righteous or holy, rather a way to relate to the local populace; just as the restriction of pork products for the Jews was more about sickness than sin.

In missions school, we discussed cultural relevance to understand that in church planting, some groups of people will have certain traditions or symbology they start (and stop) simply because of their culture.  Head covering, in this case, seems to be one of those things that started in Corinth and because of the mixture of cultures and more specifically the exposure to other churches from different backgrounds, some traditions became questionable.  I find it great to always question tradition.  There are many traditions that I don’t quite understand since I am not a part of that culture and there are others that I have witnessed that make sense as a way to maintain the legacy of the importance of something.  Unfortunately, sometimes traditions lose their flavor and importance and just become something you do because you have always done it instead of doing it because of what it means.  Interestingly enough, Paul will next be talking about the Lord’s Supper.

Why do you do what you do?  Have your traditions become meaningless and empty or do your traditions remind you of the importance of God and His presence in your life?  Question your traditions and rituals.  Test them for validity and relevance.  You could be simply wasting time!  This is what the Corinthians were doing about head covering, “do we really need to do this?”  I have a personal problem with tradition and ritual.  My problem is that when I do something over and over again for a length of time, I become almost robot like and do it just for the sake of doing it, not because of what it means.  This isn’t to say ritual and tradition is bad, just that I know I have to be careful not to slip into autopilot when repeating these things.  Let us be wary of not falling into the enemy’s trap of thinking that by performing ritual and clinging to tradition that we are earning our way into salvation.  These things are to remind us of God and enhance our relationship with Him, not save us.

Have you fallen into this trap?