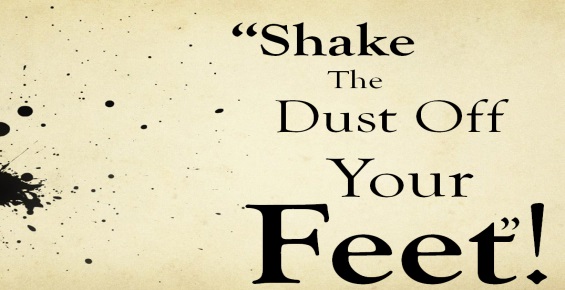 Matthew 10:11-15
11 “And whatever city or village you enter, inquire who is worthy in it, and stay at his house until you leave that city. 12 “As you enter the house, give it your greeting. 13 “If the house is worthy, give it your blessing of peace. But if it is not worthy, take back your blessing of peace. 14 “Whoever does not receive you, nor heed your words, as you go out of that house or that city, shake the dust off your feet. 15 “Truly I say to you, it will be more tolerable for the land of Sodom and Gomorrah in the day of judgment than for that city.

Quite honestly, I’ve never really liked this passage. It certainly goes against the idea of the cuddly, cushy, kind, and loving Jesus we heard about growing up in Sunday School. Jesus is telling His disciples before they go out to ask around for a place to stay while they are in a town (quite presumptuous, don’t you think?) If someone refuses to let them stay, then they must withdraw their blessing of peace, shake the dust off their feet (which is a testimony against them) and walk away. They have condemned themselves and Jesus says that Sodom and Gomorrah (which were decimated by fire and brimstone, by the way) would be more blessed than that city! Is this the loving, graceful, and merciful Jesus of the bible? Absolutely. Let’s try to understand why it seems like He was being such a big jerk in this case.

Seeking out a “worthy man” was old school talk for asking around about residents of the town who are usually given to provide housing for the poor or strangers. This was generally an act of piety that some in those days were more inclined to do for others and thus became known for their hospitality. Maybe it was a couple whose kids had grown up and moved out or an innkeeper that enjoyed blessing others with room and board when they needed it. Whatever the case, “one who is worthy” is someone who was known to extend hospitality to anyone who needed it. This should not be confused with someone who is “worthy” of the Gospel, because none of us are worthy of God’s love. Furthermore, verse 11 mentions staying there until they leave the town. This means the disciples weren’t to be bouncing around from house to house which is a sign of malcontent with that which is provided for them. It is a sign of disrespect, which would indeed diminish their testimony in whatever town they would find themselves.

As we approach the end of verse 13, we see Jesus turning to how they should respond if they are not well received. Until now, He had been talking about seeking people known for their hospitality and would take in poor people and strangers travelling and passing through. They are to arrive at said house in peace and with blessing and well wishes for those who take them in. But if for some reason they are denied, then the peace and blessing will be withdrawn from them. Why? Shouldn’t we love unconditionally? Absolutely, but Jesus is teaching them a Kingdom principle here. You cannot receive peace and blessing in your home, life, nor heart if you are not willing to receive it. If your heart is set against whatever blessing one is trying to give you, you simply will not receive it. Someone can give you a birthday gift but if your disdain for the giver prompts you to return it or not unwrap it, then you do not receive the gift. This applies not only to peace and blessing from others, but also salvation. It has been offered and given to all of us, but not all receive it well, do they? Thus, with them the disciples carried the blessing and peace of Christ wherever they went, but Jesus was warning them that they would not always be well received.

The shaking off of dust from their feet was a Jewish custom that was similar to the washing of hands, ridding you of all traces of that house or city from yourself. As John Gill mentions in his exposition of this verse:

So Paul and Barnabas did at Antioch in Pisidia, when the Jews contradicted and blasphemed the Gospel preached by them, raised a persecution against them, and expelled them out of their coasts, (Acts 13:51) which ceremony was ordered by Christ to be observed even to the cities of Judea, that should despise and reject the ministry of his apostles; and that either to show that they did not come to them with worldly views, with any design to amass riches and wealth to themselves, for they would not so much as carry away with them the dust on their feet, but it was purely with a view to their welfare, both spiritual and temporal; or to testify that they had been among them, and that that very dust they shook off their feet would rise up in judgment against them, and declare that the Gospel had been preached among them, and they had rejected it, which will be an aggravation of their condemnation; or rather to observe to them, that such was their wickedness, that even the dust of their country was infected thereby, and therefore they shook it off, as though it defiled them, as the dust of an Heathen country was thought by the Jews to do; so that by this action they signified that they would have nothing more to do with them, or say to them, and that they looked upon them as impure and unholy, as any Heathen city or country. There seems to be an allusion to some maxims and customs of the Jews, with respect to the dust of Heathen countries.

This is why Jesus says that Sodom and Gomorrah will be better off that that house or city. It is devoid of blessing. At least Sodom and Gomorrah was destroyed, which actually was an act of mercy (that they would no longer be sinning and destroying themselves and others) but this reference would allow the house or city to continue living in bitterness and hatred in enmity with God. Since that seems to be the unfavorable part of this passage, we tend to compare ourselves to the disciples kindly going from town to town to bless others. But how often have we been the one to turn away others? How often have we refused to bless others, even when we normally do (and thus reject God)? In Hebrews 2, we read about the importance of showing hospitality to strangers:

1 Let love of the brethren continue. 2 Do not neglect to show hospitality to strangers, for by this some have entertained angels without knowing it.

Instead of putting ourselves in the shoes of the disciples, we should first recognize with those in the town. How easily do we offer ourselves to serve others? How difficult is it for you to bless others with food, shelter, and clothing? James made it very clear in the opening chapter of his letter how important it is to serve others:

25 But one who looks intently at the perfect law, the law of liberty, and abides by it, not having become a forgetful hearer but an effectual doer, this man will be blessed in what he does. 26 If anyone thinks himself to be religious, and yet does not bridle his tongue but deceives his own heart, this man’s religion is worthless. 27 Pure and undefiled religion in the sight of our God and Father is this: to visit orphans and widows in their distress, and to keep oneself unstained by the world.

By focusing on the service of others, we therefore keep ourselves unstained by the world. This is the testimony against people which Jesus talked about when the disciples were to shake the dust off their feet from a house or city if they did not receive them well. It wasn’t so much a direct curse upon them, but to indicate that they are already cursed because they refuse to help and serve. Would someone indicate the same in testimony against you?