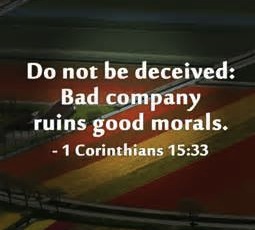 Paul calls us out on the silliness of our worldliness and worry.

29 Otherwise, what will those do who are baptized for the dead? If the dead are not raised at all, why then are they baptized for them? 30 Why are we also in danger every hour? 31 I affirm, brethren, by the boasting in you which I have in Christ Jesus our Lord, I die daily. 32 If from human motives I fought with wild beasts at Ephesus, what does it profit me? If the dead are not raised, let us eat and drink, for tomorrow we die. 33 Do not be deceived: “Bad company corrupts good morals.” 34 Become sober-minded as you ought, and stop sinning; for some have no knowledge of God. I speak this to your shame.

Whoa!  Did he just say something about being baptized for the dead?  I had to consult some commentaries on this.  It appears this verse is a controversial one.  In those times, there was not a custom of being baptized for someone who has already died (a theory that some offer), nor is this verse placed here to promote such a practice as it is contrary to any other reference to the practice of baptism in the bible.  Rather, it seems Paul was referring to the ritual of being ceremonially clean after touching a dead body, a Jewish practice.  If you go back to the rules and regulations of Israel, you will find that a person was deemed “unclean” after touching a dead body, a generally undesirable state to be in.  Paul was saying, “why go through all that trouble for a body that won’t be resurrected?”  He continues in verse 30 to say, “if this is all pointless, why then do we risk our lives for preaching this message?”

Paul’s message in this passage is almost cynical and sarcastic, “come on guys!  Are you really being convinced to think there is nothing to this message?”  The argument against resurrection is similar to arguments we hear today against the existence of God and the salvation of Christ.  Paul seems to be asking us what the point is of believing in what we believe in (in the grander scheme of things) if the little things are questionable.  If we believe in the one true God, all powerful, all knowing, all present but then we question the little things like miracles, resurrection, the Holy Spirit, then we might as well not believe anything.  Yet, we know that we do believe in the bigger things, so why are the little things such an issue?  Paul tells us in 33.

Bad company corrupts good morals.  The older King James version says this a little differently: evil communications corrupt good manners.  I know it seems a little odd and archaic, but I think it gives us a better understanding of what Paul is saying.  Let me first say that Paul isn’t telling us not to test or question what we hear and believe; we know he tells us to do so in other letters.  Rather, he is pointing out that the people we hang out with and let influence our thought process can distort and poison the truth.  It doesn’t make sense to believe in the resurrection of Christ but not the resurrection of other people.  It also doesn’t make sense to believe in the saving grace of God but not believe that Christ was crucified and resurrected for us.  I’ve heard people say that they believe in God but don’t believe in the bible or that they only believe parts of what the bible says.  In Revelation, Jesus says the lukewarm will be spit out of His mouth.  My question to anyone who is like this (and even to myself when I get this way) is “do you truly believe?”  Now, I understand how dangerous of a question that is, but to be honest, I grow spiritually in huge ways when I begin to ask the tough questions.

Verse 34 is a call to snap out of it and see the truth of God as it has been presented to us and engrained in our souls.  Paul says to stop sinning, but do we understand what he means?  He means to stop wandering away from God and believing the things of this world and refocus on Him.  In other words, he is saying, “come on guys, you know better than this.  Get your head back in the game because this stuff is important!”  Have you strayed away from God’s truth?  Have you begun to believe the lies of the world that are causing you to think things contrary to your belief? I have said it recently; belief in God is all or nothing.  You can’t have half belief or be half saved.  You can’t truly believe in the saving power of God if you don’t believe in things like miracles, resurrections, the Holy Spirit, the spiritual realm, or any of the other unnatural things that the world refuses to believe occur outside of the explainable.