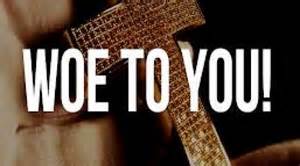 Matthew 23:13
13 “But woe to you, scribes and Pharisees, hypocrites, because you shut off the kingdom of heaven from people; for you do not enter in yourselves, nor do you allow those who are entering to go in.

There are eight woes that Jesus proclaims in Matthew 23 and we are going to look at them all individually.  The Pharisees and scribes we renowned for their knowledge of the Law and how they used it to spiritually oppress the rest of the Jewish nation.  In Luke 11, we see this same message worded a little differently:

52 “Woe to you lawyers! For you have taken away the key of knowledge; you yourselves did not enter, and you hindered those who were entering.”

Notice how Luke records Jesus as calling them “lawyers”?  This is because they were legalistic.  They were more worried about the letter of the law than the Kingdom of God.  What is worse, they weren’t even of the Kingdom but were preventing others to enter it by their oppression.  It’s like these guys were standing at the front gate turning people away from a place they didn’t even have authority to do so in.

Jesus’ word “hypocrite” that is written in Matthew originally comes from the word to describe actors in the theater.  They would wear masks to play different characters and Jesus is telling them that they are merely pretending and playing a role but aren’t actually the people they portray to be.  How much should we be careful not to be like this!  In Matthew 18 we read Jesus’ warning against being someone who causes others to stumble or not enter the Kingdom:

4 “Whoever then humbles himself as this child, he is the greatest in the kingdom of heaven. 5 “And whoever receives one such child in My name receives Me; 6 but whoever causes one of these little ones who believe in Me to stumble, it would be better for him to have a heavy millstone hung around his neck, and to be drowned in the depth of the sea. 7 “Woe to the world because of its stumbling blocks! For it is inevitable that stumbling blocks come; but woe to that man through whom the stumbling block comes!

That’s some pretty tough language, isn’t it?  Whenever I read about the Pharisees in the bible and Jesus is using them as an example, I try to be careful not to stand behind Jesus and point the finger at those in my life I think need to hear it.  I point the finger at myself and wonder, “am I doing this thing that Jesus warned against doing?”  How are we turning people away from God’s Kingdom?