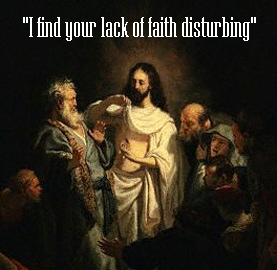 Mark 16:9-14
9 [Now after He had risen early on the first day of the week, He first appeared to Mary Magdalene, from whom He had cast out seven demons. 10 She went and reported to those who had been with Him, while they were mourning and weeping. 11 When they heard that He was alive and had been seen by her, they refused to believe it. 12 After that, He appeared in a different form to two of them while they were walking along on their way to the country. 13 They went away and reported it to the others, but they did not believe them either. 14 Afterward He appeared to the eleven themselves as they were reclining at the table; and He reproached them for their unbelief and hardness of heart, because they had not believed those who had seen Him after He had risen.

Verses 9-19 of Mark 16 are contested as original pieces of the text; some maintain that the original closing was lost. It is contested because some versions of the translated bible are thought of as side notes added after the original author finished the piece. This is all included because at least parts of it are corroborated with other pieces of text within the bible (the bible, after all, consists of all works that fit together perfectly). So, as we read about Jesus admonishing His disciples for not believing He had risen, do we believe what we read here?

Matthew 28 and Luke 8 corroborate that Jesus first appeared to Mary Magdalene and that at one time she had 7 demons possessing her. It seems a bit peculiar, in a human sense, that a woman who was possessed by demons at one point (and ostensibly quite the hell raiser) would be the first person that Jesus chose to greet after His resurrection. What does this say about God’s grace and forgiveness? What does this say about redemption and reconciliation? What does this say about the difference between how God sees us and how we see us? Some might argue that Mary Magdalene was Jesus’ girlfriend or even wife (read Challenging Your Theology), which would actually feed into the redemption story even more. The issue here, however, is not Mary’s demons or even her relationship with Jesus, rather the lack of belief found in all that He had returned from death.

How many times throughout His teachings that are recorded did Jesus say He would come back? He used metaphors and sometimes He said it bluntly to His followers. The religious leaders who had Him crucified even mocked Him for saying it. How then, could they doubt His return? Were they so blinded by their emotions and sadness that they simply could not believe? What does this say about our own emotions and how they block our faith and belief? Must we be reproached as well for our unbelief and hardness of heart? Jesus’ followers were first hand witnesses of the Holy Spirit raising others from the dead, why would Jesus be exempt from this power? In a logical sense, Jesus would be the most likely candidate to be raised from the dead, don’t you think?

Jesus was constantly reproaching His followers for their lack of faith. Our trust in God for what He says is our measure of faith. The more we trust Him, the more faith we have. The less we trust Him, the less faith we have. Jesus reproached His disciples because they did not hold onto the words He gave them before He was crucified that He would return. In John 16, Jesus spoke plainly to them in His final words with them before His persecution:

Why do we have so much trouble in learning, keeping, and trusting what Jesus tells us is true? If we would only remember His words as truth, then we would be able to see the truth in His words.