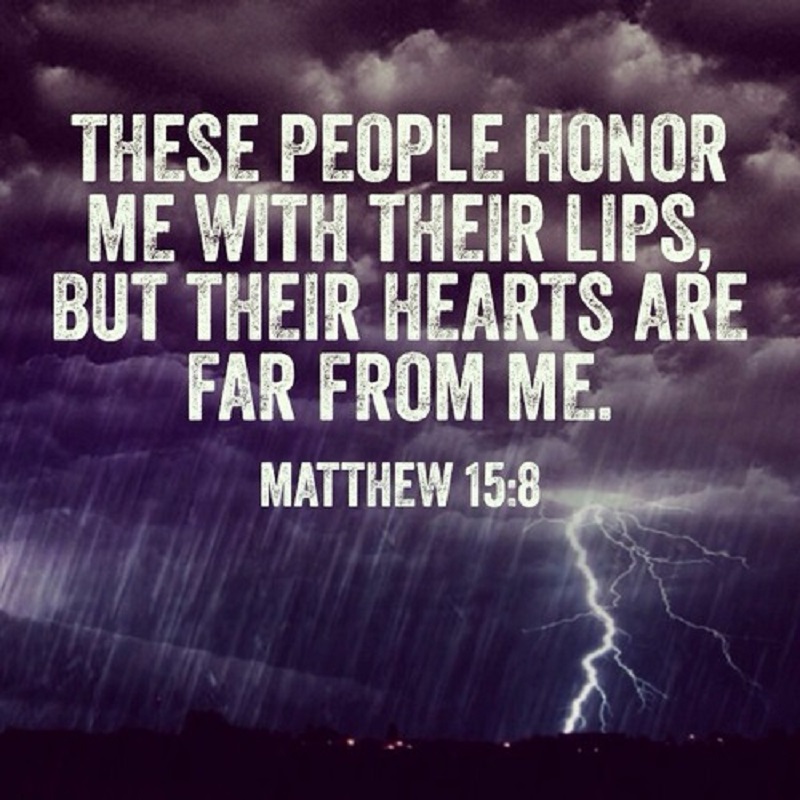 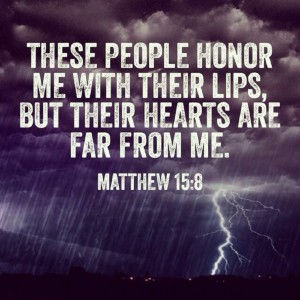 Mark 7:1-13
1 The Pharisees and some of the scribes gathered around Him when they had come from Jerusalem, 2 and had seen that some of His disciples were eating their bread with impure hands, that is, unwashed. 3 (For the Pharisees and all the Jews do not eat unless they carefully wash their hands, thus observing the traditions of the elders; 4 and when they come from the market place, they do not eat unless they cleanse themselves; and there are many other things which they have received in order to observe, such as the washing of cups and pitchers and copper pots.) 5 The Pharisees and the scribes asked Him, “Why do Your disciples not walk according to the tradition of the elders, but eat their bread with impure hands?” 6 And He said to them, “Rightly did Isaiah prophesy of you hypocrites, as it is written: ‘THIS PEOPLE HONORS ME WITH THEIR LIPS, BUT THEIR HEART IS FAR AWAY FROM ME. 7 ‘BUT IN VAIN DO THEY WORSHIP ME, TEACHING AS DOCTRINES THE PRECEPTS OF MEN.’ 8 “Neglecting the commandment of God, you hold to the tradition of men.” 9 He was also saying to them, “You are experts at setting aside the commandment of God in order to keep your tradition. 10 “For Moses said, ‘HONOR YOUR FATHER AND YOUR MOTHER ‘; and, ‘HE WHO SPEAKS EVIL OF FATHER OR MOTHER, IS TO BE PUT TO DEATH ‘; 11 but you say, ‘If a man says to his father or his mother, whatever I have that would help you is Corban (that is to say, given to God),’ 12 you no longer permit him to do anything for his father or his mother; 13 thus invalidating the word of God by your tradition which you have handed down; and you do many things such as that.”

Here is a classic example of Jesus exposing the hypocrisy of the Pharisees and scribes, the religious elite of His day.  Before we get too far ahead of ourselves, let us not think that we are holy enough to consider ourselves on Jesus’ side of this story.  Even if it confronts our pride, let’s put ourselves in the shoes of the Pharisees as we study this passage.  The Pharisees have worked hard to create a system of rules to “help” them and others better conform to God’s precepts and commandments in order to create and maintain a Holy Nation: Israel.  Most normal thinking humans would agree this is a good idea.  Sometimes God’s precepts seem difficult to understand or comply with, so having a better defined and maybe “dumbed down” version is helpful.  This was developed over the centuries that God remained silent over the people of Israel when there were no more prophets until the time that Jesus arrived.  It seems logical, helpful, and we can’t really blame the Jews for doing so; it was almost an act of self-preservation.  Seeking God when He was silent and trying to figure out what more must we do to hear Him speak again and to live in His presence.  (Now is when we start to realize that it seems like we might be in a similar period of silence).

The Jewish culture is very much built on the traditions of their forefathers.  When God was giving them His commandments throughout the Old Testament, we find that they are repeated a few times so that Israel would remember.  God instructed them to teach these things to the next generation and to make sure that generation would teach it to the next.  The goal was to build tradition out of God’s precepts in order for the nation of Israel to continue observing and obeying God’s laws.  Then suddenly this guy shows up claiming to be the Son of God and the expected Messiah and He doesn’t observe these laws and traditions?  We would be a bit perplexed by this as well.  We have built our entire lives around this system of rules and now this guy is throwing them all out the window and people are following Him because of it!  Many of us would have crucified Jesus for heresy also.  So then, how could the Pharisees have been wrong in their thinking?

We see the difference in Saul’s conversion to Paul in Acts 9, where when confronted by Jesus that his piety is worthless because it doesn’t bring pleasure to God, Saul changes his ways because his goal was always to serve and honor God with his words and actions.  The majority of the Pharisees, however, took pride in their piety and instead of serving God with their rules; they were serving themselves by displaying their self-righteousness instead of the righteousness of God.  Jesus’ point in verse 13 is that they had made so many rules, that they had lost sight of the point behind God’s commandments in the first place!  Their contradicting rules had deceived them and had twisted God’s Truth (which is exactly what the devil does in our minds to convince us to sin).  Jesus’ quoting of Isaiah reveals the hypocrisy of our rule system: that we believe we are worshipping God but in reality we are not, so it is all in vain.   Our traditions and rules have become our god instead of God Himself!  So let us ask ourselves and answer honestly:

Do I go to church to worship God or to boost my self-righteousness?

Do I serve others as a means to gain credit (maybe even secure my salvation) or is it out of a heart of loving others as God loves us?

Do I participate in religious activities because I’m “supposed to” or because I “want to”?

Is my worship of God based on what He really says pleases Him (ie what is written in the bible) or because a religious leader told me I should do it?

We must constantly check our actions and motives in how we supposedly serve God.  Are we more concerned with the cleanliness of our hands or the bread we are eating?  Are we focused on family tradition or God’s precepts?  I could go on forever with questions about this, testing every area of our lives.  In this we worship God by seeking out if we are truly worshipping Him and if we are not, we must change our habits and traditions.  If we do not, we are only deceiving others around us.  This is why Jesus says in Matthew 18:

[quote]6 but whoever causes one of these little ones who believe in Me to stumble, it would be better for him to have a heavy millstone hung around his neck, and to be drowned in the depth of the sea.[/quote]

Our creation and teaching of traditions over the precepts of God is dangerous, sinful, and self-condemning.  Jesus was very clear about this with the Pharisees and His disciples.  So, instead of making more rules that challenge the complexity of the U.S. Tax Code, let us get back to the basics and uncomplicated our worship of God.