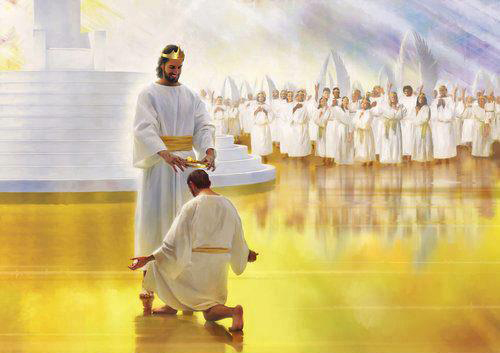 Matthew 19:27-30
27 Then Peter said to Him, “Behold, we have left everything and followed You; what then will there be for us?” 28 And Jesus said to them, “Truly I say to you, that you who have followed Me, in the regeneration when the Son of Man will sit on His glorious throne, you also shall sit upon twelve thrones, judging the twelve tribes of Israel. 29 “And everyone who has left houses or brothers or sisters or father or mother or children or farms for My name’s sake, will receive many times as much, and will inherit eternal life. 30 “But many who are first will be last; and the last, first.

There are many times in reading the scriptures where we can apply what is being said to a specific group of people to ourselves.  However, in this text I think it would be a far stretch to say that all of us will be crammed together on 12 thrones.  Jesus was clearly speaking directly to the 12 disciples (one of which is Judas!).  Jesus is recorded as saying this in Luke 22 as well but this time in a different context:

24 And there arose also a dispute among them as to which one of them was regarded to be greatest. 25 And He said to them, “The kings of the Gentiles lord it over them; and those who have authority over them are called ‘Benefactors.’ 26 “But it is not this way with you, but the one who is the greatest among you must become like the youngest, and the leader like the servant. 27 “For who is greater, the one who reclines at the table or the one who serves? Is it not the one who reclines at the table? But I am among you as the one who serves. 28 “You are those who have stood by Me in My trials; 29 and just as My Father has granted Me a kingdom, I grant you 30 that you may eat and drink at My table in My kingdom, and you will sit on thrones judging the twelve tribes of Israel.

While it is clear that Jesus is referring only to the original 12 disciples, we can still learn a Kingdom principle in this exchange.  We see that in God’s Kingdom, everything is upside down in comparison to the human world.  Jesus says that the lowest and last become the greatest and first.  Jesus humbled Himself, although God incarnate, and thus was exalted to sit at the right hand of the Father.  Peter wrote about this in chapter 5 of his first letter to the church:

5 You younger men, likewise, be subject to your elders; and all of you, clothe yourselves with humility toward one another, for GOD IS OPPOSED TO THE PROUD, BUT GIVES GRACE TO THE HUMBLE. 6 Therefore humble yourselves under the mighty hand of God, that He may exalt you at the proper time, 7 casting all your anxiety on Him, because He cares for you.

This world is all about racing to the top, but God says those who lower themselves to lift others up are those that will be exalted in the proper time…meaning when Christ returns.  This should be our ultimate goal.  We are to humble ourselves in service and love trusting that He will care for us even when the world steps on us to get above.  This is why previously Jesus spoke to the young ruler and told him to give up all his possessions so he may receive the Father’s treasure in heaven.  This is why Jesus says in Matthew 6:

The disciples were concerned for their future because they gave up everything to follow Him and He reassures them that when they reach the goal, the sacrifice will be shown as worth the struggle because our reward in heaven is greater than anything we could ever imagine.  These men were peasants, fishermen, tax collectors…nobodies and Jesus assures them thrones in a circle around almighty God!