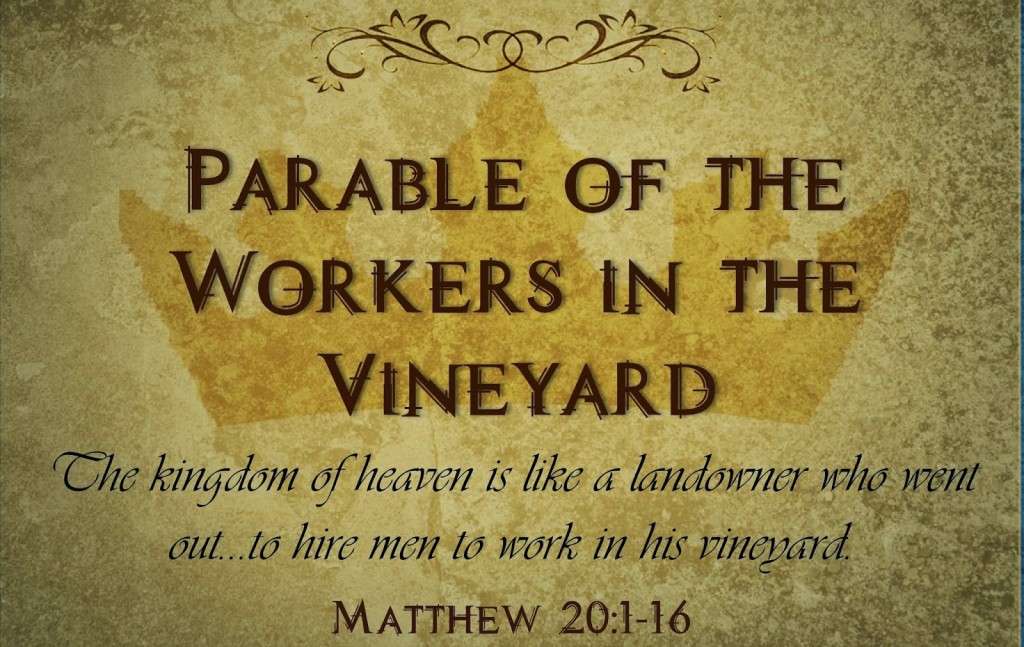 Matthew 20:1-16
1 “For the kingdom of heaven is like a landowner who went out early in the morning to hire laborers for his vineyard. 2 “When he had agreed with the laborers for a denarius for the day, he sent them into his vineyard. 3 “And he went out about the third hour and saw others standing idle in the market place; 4 and to those he said, ‘You also go into the vineyard, and whatever is right I will give you.’ And so they went. 5 “Again he went out about the sixth and the ninth hour, and did the same thing. 6 “And about the eleventh hour he went out and found others standing around; and he said to them, ‘Why have you been standing here idle all day long?’ 7 “They said to him, ‘Because no one hired us.’ He said to them, ‘You go into the vineyard too.’ 8 “When evening came, the owner of the vineyard said to his foreman, ‘Call the laborers and pay them their wages, beginning with the last group to the first.’ 9 “When those hired about the eleventh hour came, each one received a denarius. 10 “When those hired first came, they thought that they would receive more; but each of them also received a denarius. 11 “When they received it, they grumbled at the landowner, 12 saying, ‘These last men have worked only one hour, and you have made them equal to us who have borne the burden and the scorching heat of the day.’ 13 “But he answered and said to one of them, ‘Friend, I am doing you no wrong; did you not agree with me for a denarius? 14 ‘Take what is yours and go, but I wish to give to this last man the same as to you. 15 ‘Is it not lawful for me to do what I wish with what is my own? Or is your eye envious because I am generous?’ 16 “So the last shall be first, and the first last.”

This parable fights against our sense of justice and fairness, doesn’t it?  It doesn’t seem fair that the person working for the whole day receives the same pay for the one who only worked an hour.  But what if you were the person hired in the final hour, wouldn’t you feel blessed?  Maybe your sense of justice is so strong that even if that were you, you would try to give some back.  By Jesus’ attitude here, it doesn’t seem like He would have taken it back.  Let’s put it in a different context.  Say this landowner worked in a very impoverished country and was trying to employ as many people as possible so he could give them money to eat that day, would we then think this wasn’t such a bad way to do business?  Now let’s take a step back and look at this in a spiritual context.

At the end of chapter 19, Jesus was talking about our reward in heaven.  He encouraged us not to worry about the things passing away here on the earth but to continually focus heavenward, because it is there we will be handsomely rewarded by God our Father.  Do you think that when we get to heaven, that the person who was recently saved will have a different reward than someone who was saved decades ago?  That was a trick question.  The answer is: it doesn’t matter!  God’s love and grace for us is more abundant than anything else we could imagine.  We are His children and He gives to us how He sees fit.  Regardless of how He gives to us, we will appreciate it and have no right to argue about it.  Jesus gives abundantly, generously, and evenly to all who come to Him.  We all get everything!  This is what is fair according to the love of God.  This is what is just in regards to His grace.

If we are to live in His Kingdom, then we must begin to adapt to His Kingdom rules.  This is how the Kingdom operates: fully and abundantly to all.  One person doesn’t receive more or less blessing based on their tenure.  There isn’t a structure where you have to “earn your way to the top”.  You cannot earn grace, so how could we ever think to earn more (or less) grace and love from God?  Can you see the difference between worldly thinking and godly thinking?  Let us break free from the mentality of having to fight your way to the top.  Jesus already fought that battle for us and won, now all we have to do is accept it and receive all His benefits.