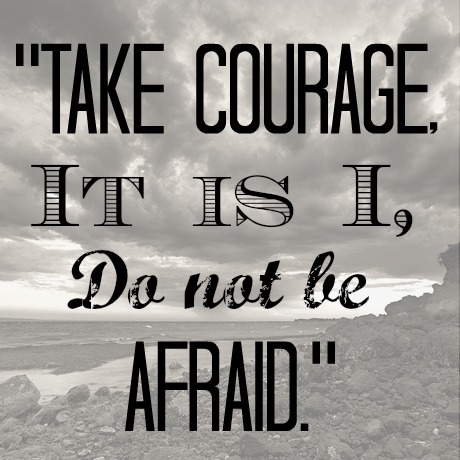 Matthew 14:24-27
24 But the boat was already a long distance from the land, battered by the waves; for the wind was contrary. 25 And in the fourth watch of the night He came to them, walking on the sea. 26 When the disciples saw Him walking on the sea, they were terrified, and said, “It is a ghost!” And they cried out in fear. 27 But immediately Jesus spoke to them, saying, “Take courage, it is I; do not be afraid.”

Whenever I read the word “courage” I can’t help but think about the cowardly lion in The Wizard of Oz as he is telling his newfound friends how badly he wants courage and what it means to him just before meeting the Wizard. (here’s the clip if you don’t remember).  Jesus, in this story, does exactly what the Wizard does for the lion; He reveals to us that He is with us and therefore have nothing to be afraid of.  “Have faith instead of fear,” is what Jesus instructs them.  Why is this so difficult for us?

I’m quite sure that if any of us ever saw someone walking on a stormy lake in the middle of the night, it would freak us out.  But think about the implications of recognizing not only God’s presence, but that He is for us and loves us.  I had an interesting conversation with a very dear friend of mine last night after he said, “I will never fear God.”  Immediately, my theological bells and whistles went off and red flags were flying high.  My brain kicked into hyperdrive recalling the many bible verses about fearing God (in fact, I had just quoted Proverbs 9:10).  Then I had to put aside my holy rolling religious self-righteousness and listen to what he was saying.  I’ll try to recap his point:

Our fear of God is directly proportionate to the amount of unforgiven, unrepented sin in our lives.  Yes, I will have to give an account for my wrong doings, but I cannot believe that a God who loves us and sacrificed what He did for us would want us to be afraid of Him.  It just doesn’t make sense.

Yes, the fear of God is the beginning of wisdom.  Recognizing our own iniquity opens the door to recognizing the majesty of the Lord and what He has done for us and therefore understanding the gravity of His grace in our lives.  This was Jesus’ point in Matthew 5 at the beginning of the Sermon on the Mount:

3 “Blessed are the poor in spirit, for theirs is the kingdom of heaven.

However, once we recognize our frailty and our need of His grace and mercy, it changes everything.  It’s unfortunate that as a society and more specifically a Christian culture, we have taken to choosing one or the other side of the story and are only living in half of the bigger picture.  Either we preach holy condemnation and hellfire or we try to create an environment of what Bonhoeffer calls “cheap grace” where we take for granted God’s sacrifice for us.  We have come full swing out of the era of spiritual fear and are now living in spiritual laziness.  Yet, there is a place for all of it and until we take a step back and see the bigger picture, we are deceiving ourselves and others with half-informed doctrine.

As we read Jesus’ exhortation to His disciples in the boat, we can begin to understand its implications on a much deeper level.  Yes, we can read it and think, “He’s just telling the boys to chill out because it’s not a ghost, it’s Him.”  Yeah, but He’s walking on water!!!  That’s enough to freak anyone out, regardless of who it is.  The point, however, is that it doesn’t matter if its a ghost, person, or anything else nor does it matter what they are doing as long as Jesus is with you, there is nothing to fear.

We will soon read about Peter’s response to what Jesus tells them about taking courage, but think about where Jesus wants you to have more courage today.  Where in your life are you afraid?  What decision are you having difficulty making even though you know it’s what He wants you to do?  What situation is looming over you or approaching you that is causing you to cringe and brace for?  Jesus says, “Take courage.  I am with you.  You need not be afraid, even of me.”