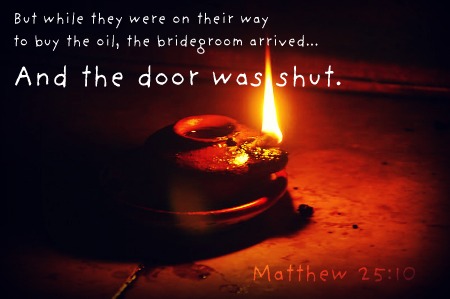 Matthew 25:1-13
1 “Then the kingdom of heaven will be comparable to ten virgins, who took their lamps and went out to meet the bridegroom. 2 “Five of them were foolish, and five were prudent. 3 “For when the foolish took their lamps, they took no oil with them, 4 but the prudent took oil in flasks along with their lamps. 5 “Now while the bridegroom was delaying, they all got drowsy and began to sleep. 6 “But at midnight there was a shout, ‘Behold, the bridegroom! Come out to meet him.’ 7 “Then all those virgins rose and trimmed their lamps. 8 “The foolish said to the prudent, ‘Give us some of your oil, for our lamps are going out.’ 9 “But the prudent answered, ‘No, there will not be enough for us and you too; go instead to the dealers and buy some for yourselves.’ 10 “And while they were going away to make the purchase, the bridegroom came, and those who were ready went in with him to the wedding feast; and the door was shut. 11 “Later the other virgins also came, saying, ‘Lord, lord, open up for us.’ 12 “But he answered, ‘Truly I say to you, I do not know you.’ 13 “Be on the alert then, for you do not know the day nor the hour.

Jesus is trying hard to make sure that His followers understand the importance of being ready for His return.  At the end of chapter 24, we read His explicit warning.  Now He is hitting us with two parables.  In this one we find the difference between those who are not diligent in their preparedness and those who are.  Are you being diligent in preparing for His return?

Yesterday I referenced Matthew 7 which reminds us that our actions alone do not save us, but our heart’s desire does:

21 “Not everyone who says to Me, ‘Lord, Lord,’ will enter the kingdom of heaven, but he who does the will of My Father who is in heaven will enter. 22 “Many will say to Me on that day, ‘Lord, Lord, did we not prophesy in Your name, and in Your name cast out demons, and in Your name perform many miracles?’ 23 “And then I will declare to them, ‘I never knew you; DEPART FROM ME, YOU WHO PRACTICE LAWLESSNESS.’

In the parable of the 10 virgins, we see that all of them took lamps and ran to wait where they were supposed to, but only half followed through with expectancy.  The other half was lazy and instead of doing what was necessary gave in to their fleshly desires (laziness, procrastination) and were left out.  At the last minute they expected those who had prepared themselves to help; so they also gave in to selfishness!  Our lack of growth in our relationship with Christ is what will cause us to miss the final invitation to the party.

Is your lamp full of oil (heart filled with the Holy Spirit)?  Are you working to be full of the Spirit or are you taking for granted the time you think you have?  The Spirit is that which is inside us that burns bright the light of the Lord.  Instead of focusing on Him and growing in Him we put it off because it’s “too much work” or just “doesn’t fit into my schedule,” yet when that day comes and we are not ready, we will surely regret it.  Start filling your lamp today.