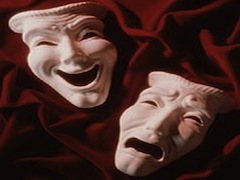 This is a question that has been on my mind since a friend asked me this over a year ago. At the time, I answered it as best I could and then it cropped up again during missions school when one of our teachers told us he prefers not to call himself a Christian because of what the word actually means. It was at this point that I felt challenged to try to understand what it means more and more. Recently, I have begun an in depth study of Jesus’ infamous Sermon on the Mount in an attempt to further understand what it means to be a “Christian”.

The word “Christ” means, “anointed one”. It is in reference to the prophesies found throughout the Old Testament proclaiming the coming of a Chosen One or Anointed One (of God) who would save the Jews along with everyone else in the world. Christians or “Christianos” in the original Greek refers to those who are not just followers of the teachings of the anointed one, but in fact follow Him so closely that they are like Him. This is where we get the term “Christlike” or “Christlikeness”. Moreover, we find the first reference of this term in Acts 11:26 when Luke was describing the growth of the body of followers of Jesus’ teachings, “And for an entire year they met with the church and taught considerablenumbers; and the disciples were first called Christians in Antioch.” Previously, the disciples or followers of Jesus were identified as being of “The Way,” (found earlier in the Book of Acts) a reference to how different they acted in response to the rest of the world. At the time, there was much confusion about these folks, as it was uncertain whether they were a sect of Judaism, a separate cult altogether, or just a group of people who merely exposed everyone else’s hypocrisy because they acted differently than everyone else.

I don’t like calling myself a Christian anymore. I believe we have watered down what it means to be a Christian so that it is the same as choosing a political party by which you prefer to identify yourself. You may not agree with everything it says but it resembles you closest because of its tenets, that many self-proclaimed Christian groups “do good things,” that it is the religion your family claims, or simply that you believe in a higher power but don’t agree with what other religions say or do. I’m not saying that I don’t like calling myself a Christian because of how other self proclaimed Christians behave. I prefer not to proclaim to be a Christian because quite frankly I don’t know if I rate the title. There are two things that I have witnessed as of late that are probably the reason for me writing this now.

The other day I noticed a facebook post that revealed someone’s thoughts that they relate “Christianity” with hypocrisy. Quite frankly this ticked me off…but not because it was said; rather because it was mostly true. Secondly, I heard an American man in a Guatemalan coffee shop speak about the girl behind the counter as such: “She acts like a sweet little innocent Christian girl but some of the stuff that comes out of her mouth…man, I love a sinner!” I actually had to stop what I was doing and let it soak in for a minute to make sure I fully comprehended what I had heard.

One of the things that has bothered me for some time is the clear distinction between religion and being a follower of Christ. I’ve written a few times on this subject so I will refrain from digging into it a whole lot here. I understand that religion is the world’s way of describing people who have faith in something. It has even gone so far to represent someone’s way of living (even if it isn’t related to faith in a higher power) such as, “that guy works out religiously.” If we look at the teachings of Jesus, however, specifically His interactions with the Pharisees and religious giants of the time, He teaches against religion! What they believed and taught in that time was the result of them making their own way to create a system which made them gods instead of recognizing their need for God. It was a tricky scheme because they used the tenets passed down from the Law and the Prophets (what we find in today’s Old Testament), but they made it revolve around themselves instead of God. So what have we done with Jesus’ teachings against religion? We’ve made religions out of them!

Now, I know some may argue with me about this concerning the validity of the bible, etc. I’ve already addressed this before and will gladly do so again if anyone wants to discuss it. But, the purpose of this article is to deal with “Christianity”. The contradiction in the previous two statements from others is that if someone truly is a Christian, then they cannot be a hypocrite or act one way and talk in another. A hypocrite, in the times of Jesus, was meant to signify someone who was an actor and wore a mask to play a specific part in the theater. This is what Jesus called the Pharisees. So, if we are true followers of Christ, then how can we be hypocritical?

If we go back to the verse in Acts I referenced above, we will find that the original Greek word that Luke used to express “were called” is chrematizo. Once again, our lack of meaning in English wording fails us. Chrematizo represents more than just “someone called them…” it almost represents a revelation. It is the word also used to represent when God speaks and reveals an innate truth. Whether or not you believe that God exists or that He even speaks to us is not the issue; rather, we need to understand that these people being called Christians was a big deal. I’d like to expose one thing that this sentence does not say (but we act as if it does). It does not say that the disciples called themselves Christians. They were so named as a result of how they lived (that encompasses how they spoke to others and how it lined up with everything else they did). So if these men (and women) who are revered not only as disciples and followers of Christ but also prophets, apostles, and people who clearly possessed the power of God within them and obviously had the right to call themselves Christlike, why didn’t they?

For one, it’s not about the title. For two, it didn’t matter what they were called. As a disciple of Christ, it isn’t about how “good” (a relative term) you are, it is about who He is and who you are because of Him. It makes me think about my self-defense instructor who once told me about the passing of the Kenpo Karate Grand Master Ed Parker. Until the day he died, he was and had been the only 10th degree black belt in that discipline. Not long afterwards, a group of his students promoted themselves to 10th degree. Why? Was the only thing they were concerned about the title? Maybe they could get more money from their businesses as a result of their promotion. The martial arts world seems to be one of this type of activity. People claiming they are this and that and others refuting them. In “the old days,” one’s skill and reputation was always on the line. Martial artists would constantly challenge and fight each other. They were not able to simply state what their skill level was; rather they had to prove it by their actions and when all was said and done, everyone knew. Mr. Miyagi reflects this truth in The Karate Kid as well when he explains the unimportance of belt rank.

Another analogy that comes to mind is when I was in the Marine Corps; there was this innate desire to be “salty”. This referred to how much your uniform was faded as a result of its constant wear and ironing. Ironically, only “junior” Marines cared that much about it in order to establish some sort of sub-ranking system to differentiate between themselves and someone who was fresh out of boot camp. The funny thing is that if you looked into a “salty dog’s” wall locker, you would find 4 other sets of uniforms that were brand new. For some reason, none of us realized the ridiculousness that regardless of how faded our uniforms were, we were still wearing a rank that indicated 1) we had still only been in for 2 years or less or 2) that we weren’t a good enough Marine to get promoted. Our uniforms indicated we were salty, but there were clear indications that we were not who we said we were. In reality, we were just hypocrites.

1 thought on “What Does it Mean to be a Christian?”