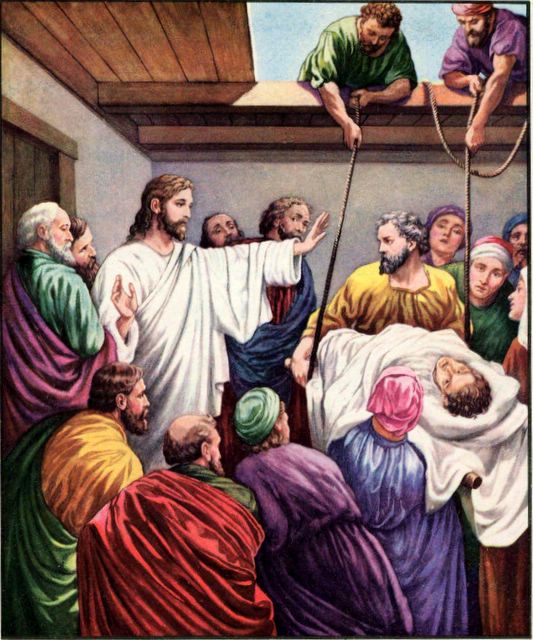 Mark 2:1-12
1 When He had come back to Capernaum several days afterward, it was heard that He was at home. 2 And many were gathered together, so that there was no longer room, not even near the door; and He was speaking the word to them. 3 And they came, bringing to Him a paralytic, carried by four men. 4 Being unable to get to Him because of the crowd, they removed the roof above Him; and when they had dug an opening, they let down the pallet on which the paralytic was lying. 5 And Jesus seeing their faith said to the paralytic, “Son, your sins are forgiven.” 6 But some of the scribes were sitting there and reasoning in their hearts, 7 “Why does this man speak that way? He is blaspheming; who can forgive sins but God alone?” 8 Immediately Jesus, aware in His spirit that they were reasoning that way within themselves, said to them, “Why are you reasoning about these things in your hearts? 9 “Which is easier, to say to the paralytic, ‘Your sins are forgiven ‘; or to say, ‘Get up, and pick up your pallet and walk ‘? 10 “But so that you may know that the Son of Man has authority on earth to forgive sins “-He said to the paralytic, 11 “I say to you, get up, pick up your pallet and go home.” 12 And he got up and immediately picked up the pallet and went out in the sight of everyone, so that they were all amazed and were glorifying God, saying, “We have never seen anything like this.”

We really have a belief issue these days.  As we read this passage, it is easy to look at it as something that is not applicable today and just a cool story from Jesus’ ministry.  We must recognize, however, that this is very applicable to today.  Jesus was revealing His authority, given to Him by the power of the Holy Spirit, which we now have ourselves.  In John 20, as Jesus was “briefing” His disciples just after His crucifixion and resurrection, He said:

Jesus not only had the authority by the Holy Spirit to forgive sins, He also gave us the same authority!  Ok, we get that; forgive others of their sins…but what about the healing of the paralytic?  By the same power and authority of the Holy Spirit, Jesus did this as well.  Too often we see Jesus’ power and forget that it was all given to Him through the Holy Spirit, not because He was the Messiah and Son of God.  Yes, Jesus is God incarnate, but He also humbled Himself in the form of a man to show us the power of the gift He has given us.

Let us also not miss the point about the man being healed as a result of the faith of his friends.  In James 5:16, we see a verse in the bible that is commonly used to convince others of the power of confession, but we rarely focus on the healing part of it:

[quote]13 Is anyone among you suffering? Then he must pray. Is anyone cheerful? He is to sing praises. 14 Is anyone among you sick? Then he must call for the elders of the church and they are to pray over him, anointing him with oil in the name of the Lord; 15 and the prayer offered in faith will restore the one who is sick, and the Lord will raise him up, and if he has committed sins, they will be forgiven him. 16 Therefore, confess your sins to one another, and pray for one another so that you may be healed. The effective prayer of a righteous man can accomplish much. 17 Elijah was a man with a nature like ours, and he prayed earnestly that it would not rain, and it did not rain on the earth for three years and six months. 18 Then he prayed again, and the sky poured rain and the earth produced its fruit. 19 My brethren, if any among you strays from the truth and one turns him back, 20 let him know that he who turns a sinner from the error of his way will save his soul from death and will cover a multitude of sins.[/quote]

In its context, we see that the bigger picture here isn’t necessarily confessing sins, but the power of prayer.  Powerful prayer results in healing.  Prayer from one who is not living a sinful life brings healing to others.  Now, why do you think this is?  The bible instructs us to seek God’s will and His Kingdom above all things.  It also tells us that sinfulness pulls us away from God and affects our relationship with Him.  If we are living righteously, we will know God’s will because we are close to Him and therefore will know and seek His will.  It will be activated in our lives and we will become a force of His Kingdom here on earth.  The power of our prayers has nothing to do with us, but everything to do with Him.  Jesus’ ministry on earth was so powerful because He had a very close relationship with God the Father through the Holy Spirit.  The friends of the paralytic had strong faith because they had a close relationship with God.  The paralytic, it appears, did not.  He was full of sin but thanks to the strong relationship the others had with God, they were able to plead on his behalf and take him to be healed.

This accentuates the importance of righteous living.  It isn’t about receiving or maintaining our salvation.  It isn’t even about being a “good person”.  It is about living in a way that God can use you to reveal the power of the Kingdom of God to others.  In the beginning of this post, I mentioned that we have a belief issue these days.  Our issue is that we don’t even think these things are possible or relevant today, so we don’t even see them as a goal to achieve.  We cannot have strong faith without a close relationship with God.  We cannot have a close relationship with God if our lives are full of sin.  We cannot get rid of the sin in our lives without the power of the Holy Spirit.  We cannot receive the power of the Holy Spirit without recognizing our frailty in this sinful world and our need for Him.