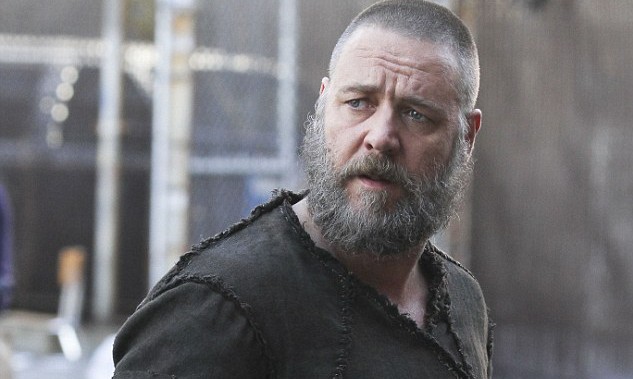 I read a few reviews of this movie before I actually saw it last night.  As one who daily studies the bible, I like most Christians was interested in the authenticity of the movie and was curious what various Christian leaders thought about it.  Some have torn it apart, others have praised it.  Most really don’t care.  I don’t know why, but I feel driven to share my own two cents about this movie.

I’ve never written a movie review before and didn’t go into it with the plans of doing so.  I intended to enjoy the movie with my wife which I did.  So, I wasn’t sitting there with pen and pad taking notes and flipping through my bible pointing out the inconsistencies and drawing up a thesis.  Maybe this isn’t how people do movie reviews, but it is how I’ve always pictured it being done.  Before you read more I will warn you that there are spoilers to the elemental themes of the movie, so if that concerns you, go see the movie and come back here and tell me how wrong I am 🙂

Ok, enough with the stalling and onto my points…

“The movie wasn’t consistent with Scripture.”
ARE YOU KIDDING ME? If you want to make a movie that is consistent with scripture, don’t produce it through Hollywood.  If you plan on seeing a movie that is consistent with scripture, don’t watch it if it is produced by Hollywood.  I mean, seriously…did you really think it would be?  Hollywood’s goal is to entertain the masses and make money doing so.  They don’t do this by selling stale popcorn and flat soda, but creating a thematic visual for people to enjoy (something I like to call cinematic adventures).  But wait…have you read the scripture?

Starting in Genesis 6, we read about the corruption of mankind in the world.  That was evident in the movie.  We read that Noah found favor with God.  That was evident in the movie.  We see that God wanted to blot out the vast majority of mankind from the face of the earth.  That was evident in the movie.  The building of the ark, the collection of animals, the Nephilim, the preparation involved, the people on the ark were all consistent with scripture (cue record scratch).  “Wait, that bad guy made it on…that isn’t in scripture.  Wait, Genesis 7:13 tells us that the wives of Noah’s 3 sons were on board but they weren’t. ” It’s funny how scripture doesn’t detail what condition these wives were in when they entered the boat.  I also suppose that the introduction of Tubal Cain completely nullifies the whole story.  What is more important, that an evil stowaway made it on at the last minute or that he didn’t survive the trip?  Remember what I said about Hollywood?

“The movie portrays Noah as an environmentalist.”
ARE YOU KIDDING ME?  Noah tells his kid not to pluck one of a few flowers from the desert drylands and prefers not to kill animals and suddenly he is a hippie that turns the movie into an issue of global warming?  I think this perspective is more motivated by political agenda and that the producer really isn’t concerned about Noah’s political motives.  This part of the character is to portray where the bible talks about Noah being in God’s favor and walking with God. (Genesis 6).  He respected the creation because he respected the Creator.

I’ve brought to attention a few of these ridiculous claims I have read in some other reviews because I want to expose our shortsightedness.  It’s not just about this movie, but about God and the bible altogether.  We have this preconceived idea of how things are supposed to be and when we are confronted with the reality of them, we reject them because it doesn’t fit into our nice little box.  This isn’t to say that the movie portrays exactly what happened because none of us really know; we weren’t there.  One of the problems we suffer from is that the story of Noah and The Great Flood is one that has been told hundreds of thousands of times to us as children.  We’ve seen it in picture books and reenactments in Sunday school.  We have made plays where we all get to dress up as animals and one lucky person as the star of the show gets to wear a tunic and carry a staff (or was that Moses?).  We have been so quick to judge the minute details of the story, a 2+ hour movie adapted from 5 short chapters in the bible, that we have completely missed the overall message.  We continue to do this throughout the reading and studying of scripture.  Just as mankind in the movie, we have completely distorted God’s purpose of it all.

A story of sinfulness.
This is one of the main points of the story: bible and movie.  One of the messages throughout scripture is man’s depravity when isolated from God.  Throughout various points of the movie, we see man’s disgusting iniquity and the depravity of God’s presence in their lives.  Even Noah himself recognizes the futility of thinking his family could be righteous and deserving of God’s presence and a relationship with Him.  Jesus’ very own question from the cross, “Father, why have you forsaken me?” when He bears the world’s sin is echoed throughout this film to highlight what it feels like to not walk with God.  The movie, however, very accurately portrays (albeit subtly) that the point isn’t whether we sin or not, but if we recognize our sinfulness and depravity.  Our salvation is dependent upon our repentance and we cannot repent if we do not recognize our own sin.  The “men” in the movie saw themselves as gods themselves, distorting the point of “being made in God’s own image.”  It’s a gift He has given us to use to “cultivate and keep” the earth (Genesis 2), not destroy it.

A story of broken humanity.
We all fall short of the glory of God.  Paul’s exegesis in his letter to the Romans explains what the Old Testament describes.  We all fall short, even those who are seen as spiritual giants and leaders.  If we pay attention to even the most famous stories of the bible: Abraham, Noah, David…they were all men after God’s own heart but also fallible and broken.  They all failed God multiple times, but He used them anyway.  We tend to look at these folks as perfect heroes who had it all together.  This image we have of Noah is destroyed as we watch the movie and he loses his mind at sea and then drinks himself silly once they make it to land.  This doesn’t create a side of Noah that doesn’t exist, it exposes the brokenness in all of us, including the spiritual heroes we look up to.  Even towards the end of the movie we see a conversation between Noah and his daughter-in-law where she reminds him of this fact.  Even though we are not worthy to be chosen by God, we are chosen according to His perfect plan.  Just as it is revealed in Ephesians 2:

8 For by grace you have been saved through faith; and that not of yourselves, it is the gift of God; 9 not as a result of works, so that no one may boast. 10 For we are His workmanship, created in Christ Jesus for good works, which God prepared beforehand so that we would walk in them.

A story of redemption.
This is the whole point of the story!  In Genesis 6:7 we read that God is “sorry” for creating mankind.  Generally we see this as a chink in God’s sovereign armor.  How could He not foresee this happening?  Did He make a mistake?  Why did He let sinfulness enter the world in the first place?  We could apply this same flawed thought process to when Jesus cried out to the father, feeling as though He had been forsaken.  Jesus knew He wasn’t forsaken.  He knew this moment would arrive. It isn’t about God making a mistake, it is about recognizing the gravity of sinfulness.  Perhaps these are questions better answered by biblical scholars or left to be answered once we are face-to-face with the Creator Himself.  But let us instead look at a specific point in the movie that should be an eye opener to all of us.

There is a point when the family is having a discussion trying to figure out why God is doing what He is doing.  They wonder why God is salvaging all the animals, but not all the humans.  “They are the only creatures still living the way they were designed to live.”  God’s lamenting in Genesis 6:7 isn’t that He made a mistake, it’s that His heart grieves because mankind chose to become their own gods instead of in communion with Him.  This is why we continually have the reminder of original sin.  I loved this part of the movie because it exposed a very real part of our lives as humans in our relation to God.  We don’t always understand, but we continue being obedient anyway.  We don’t always see the bigger picture because He hasn’t revealed it to us and may never reveal it to us.  We learn later that it isn’t about just the animals, but humans have been given favor and mercy as well.

We are also confronted with the realization of why God was using water instead of fire.  “It isn’t extinction, it’s a cleansing.”  The Great Flood wasn’t about killing mankind off like Noah was convinced it was (in the movie).  It was about a new start.  This points to Jesus’ crucifixion and the point of what we are about to celebrate as the Easter holiday approaches.  It isn’t about erasing all men from the memory of the earth, it is about cleansing us from corruption and sinfulness.  It is about forgiveness and mercy.  It’s about setting us free.  Too often we see events from the Old Testament like the flood or Sodom and Gomorrah and say, “God’s a big jerk who just takes pleasure in destroying people.”  No, God is a merciful sovereign being who works to show us the way.  If you disagree with me, I suggest you read your bible a little more intently.

Before we can fully appreciate the core truths of God’s story weaved throughout the bible, we must break free from what we have been conditioned to think.  Before we get distracted by the little things that truly don’t matter, we must seek to understand the overarching theme of God’s love and redemption.  Before we try to fit things into our little predefined box, we must recognize that nothing fits in it because we have stuffed ourselves in it and thus have restricted our own vision of the truth.