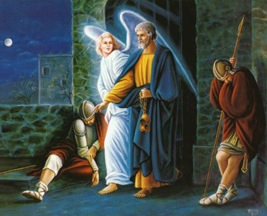 Acts 12:5-11
5 So Peter was kept in the prison, but prayer for him was being made fervently by the church to God. 6 On the very night when Herod was about to bring him forward, Peter was sleeping between two soldiers, bound with two chains, and guards in front of the door were watching over the prison. 7 And behold, an angel of the Lord suddenly appeared and a light shone in the cell; and he struck Peter’s side and woke him up, saying, “Get up quickly.” And his chains fell off his hands. 8 And the angel said to him, “Gird yourself and put on your sandals.” And he did so. And he said to him, “Wrap your cloak around you and follow me.” 9 And he went out and continued to follow, and he did not know that what was being done by the angel was real, but thought he was seeing a vision. 10 When they had passed the first and second guard, they came to the iron gate that leads into the city, which opened for them by itself; and they went out and went along one street, and immediately the angel departed from him. 11 When Peter came to himself, he said, “Now I know for sure that the Lord has sent forth His angel and rescued me from the hand of Herod and from all that the Jewish people were expecting.”

I’ve always maintained that when we truly seek out God, we will have a one-on-one interaction with Him that will always be a solidified marker in our lives to which we can always reference the existence and faithfulness of God.  For me it was when I was a kid and He spoke to me in an audible voice.  For you it is probably something very different.  We know that Peter spent 3 years with Jesus, so he didn’t really have the problem of wondering if Jesus existed or if he was faithful.  But I think that despite the pouring out of the Holy Spirit at Pentecost, the miracles performed through him, and the vision telling him what is clean and unclean, to date this is one of the most prominent experiences Peter had.  It’s easy to talk about God’s faithfulness when things are going well.  It’s easy to believe in God’s goodness when you are just having a conversation with Him.  But, Peter not only was arrested, but he sat in jail until the very last moment!  We can relate this to our very own imprisonment.

We are all struggling with something, the majority of us with many things.  Our past hurts, habits, and hang-ups impede us from advancing in our relationships with others and with God.  Unfortunately, sometimes we don’t recognize it.  We don’t appreciate the gravity of our past hurts and our sinfulness that results from it.  We don’t take responsibility for our actions and admit that we were wrong.  This is the prison we are in.  Yet, we also need to understand that for complete healing, we need God’s help.  We cannot do it on our own.  James 5:16 says:

Therefore, confess your sins to one another, and pray for one another so that you may be healed. The effective prayer of a righteous man can accomplish much.

This passage from Acts starts out by talking about the fervent prayer of the church, the Ekklesia, the gathering of believers who not only believed in the existence of God, but in His goodness, faithfulness, and providence.  Don’t you want to break free from the prison you are living in?  We must trust God to break the chains and open the gate so we can walk out.  Just because God doesn’t move on our timetable doesn’t mean He has forsaken you.  I’m sure Peter would have rather not been arrested at all or set free on the first night.  We must share our struggles with others so they can be praying for us.  Maybe God has already broken the chains and the cell is open, you just have to walk out into freedom.  The process might seem like a dream but eventually you will understand that it is real.