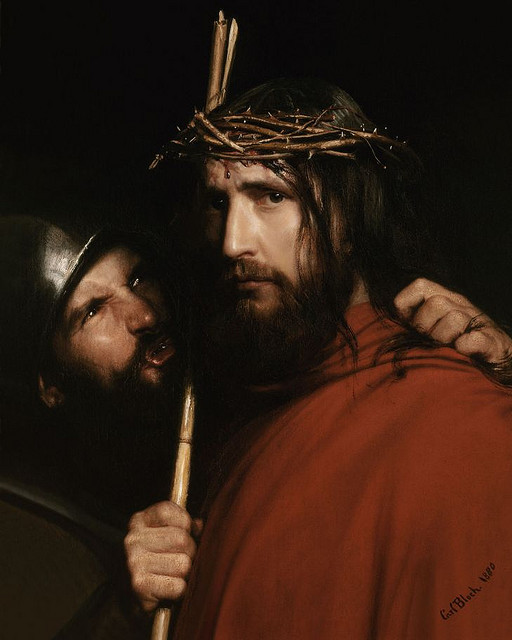 Mark 15:16-20
16 The soldiers took Him away into the palace (that is, the Praetorium), and they called together the whole Roman cohort. 17 They dressed Him up in purple, and after twisting a crown of thorns, they put it on Him; 18 and they began to acclaim Him, “Hail, King of the Jews!” 19 They kept beating His head with a reed, and spitting on Him, and kneeling and bowing before Him. 20 After they had mocked Him, they took the purple robe off Him and put His own garments on Him. And they led Him out to crucify Him.

How do you think Jesus felt during this part of the process? We can imagine the physical pain and suffering He endured but what about emotional and spiritual? We know that once He was hanging on the cross, He asked God the Father to forgive everyone, but what about this point when He is being mocked and beat?

Have you ever experienced a time when someone didn’t believe what you were saying but you know you were telling the truth? How did you feel? Did you feel vindicated or justified because you knew that despite their ignorance, “they’re gonna see and then will know”? When we are grounded in the truth, aside from the emotional hurt of not being believed, it really doesn’t matter that much what others say or do, does it? We just keep saying to ourselves, “you’ll see, and then you will look like a fool.”

In 1 Corinthians chapter 1, Paul reminds us that this will become a regular occurrence as we draw near to God and work out the calling and purpose He has placed upon each and every one of us:

Or maybe we are the “wise” ones mocking the truth of God. Have you ever thought about how you refuse to believe what Jesus is telling us? Maybe we don’t hit Him over the head and crush a crown of thorns on His brow, but do we, in our deepest secret place of our hearts, reject His truth? Do we believe what the bible says He is and does? Do we recognize His authority on earth and in heaven and regard Him as our King? Unfortunately for us, we tend to only believe the parts that our convenient for us, not the whole story. We mock the healing of the sick, the raising of the dead, the pouring out of the Spirit, and even the very purpose that God has for us. It would be better if we physically beat the man Jesus than reject the truth of Jesus Christ the Messiah and Son of God.

Whichever side of this story you most identify with today, remember that God is good, faithful, and loving. He can redeem our rejection of Him and He can strengthen us when we are persecuted. Not only does He have a purpose for us, but He also has a purpose for the evil done to us and the evil we do to others. When we reject Him, this will make our redemption all the more sweeter. When we are mocked and abused, He will fill our hearts with joy. When we stay focused on Him, nothing else really matters.